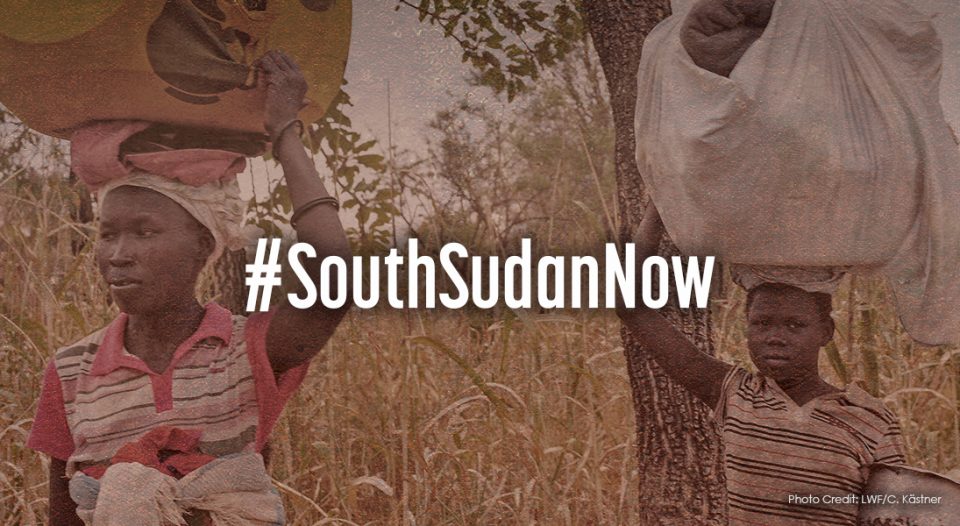 More than 7 million people in South Sudan need humanitarian assistance as a result of drought and renewed violence. According to UNICEF, famine was recently declared in the north-central part of the country, where 100,000 people are facing imminent starvation.

Recently, the #4famines hashtag has been drawing attention to the four countries that are experiencing or are at risk of experiencing famine: South Sudan, Yemen, Nigeria and Somalia.

The Evangelical Lutheran Church in America (ELCA) is committed to its ongoing work in South Sudan to help cultivate peace in order to build a sustainable future for the millions affected by civil war and famine.

“For the ELCA, support of work in South Sudan and companionship with South Sudanese families has extended for decades. The ELCA is collectively building upon its cooperative work there. And in this time of increased crisis, we are blessed by both relationship and presence,” said the Rev. Daniel Rift, director, ELCA World Hunger and Lutheran Disaster Appeal.

The ELCA is working with others to deliver immediate famine relief, which forms one of its  three focus areas in the region. The other two, sustainable food security and sustained ministry, center around the church’s long-term commitment to the people of South Sudan to build resilient and empowered communities.

This commitment to the people of South Sudan and the ministerial leadership of those from South Sudan has led to a new church – the Evangelical Lutheran Church Africa Mission in South Sudan. The main component of this new church is the Lutheran Community Center and Clinic, currently under construction in the nation’s capital, Juba. The ELCA is playing a large role by funding the construction of the Center and Clinic.

“This project will train mission leaders, conduct outreach programs and, ultimately, raise up an ethnically and culturally diverse church,” said Andrew Steele, director of ELCA Global Church Sponsorship. “In addition, the Lutheran center hopes to offer computer training and English as a Second Language courses, contributing to youth employment – programming that is based on an evangelism strategy found to be effective in other African nations. The primary health clinic will serve women and children in the community, as well as operate as the country’s first and only fistula clinic.”

Once operational, the center will offer holistic health, education and training services for internally displaced people in Juba. It will not only serve as the local community’s one health care provider, it will also provide medical expertise that will broaden its reach to all of Juba – and, potentially, the entire country.

“The church will solidify our continued presence and serve as a visible sign of hope and location for health care, aimed especially at a reduction of maternal and child mortality,” Rift said.

The ELCA’s work to create future sustainability includes developing efforts to forge peace and reconciliation in the Upper Nile region of South Sudan in collaboration with the Episcopal Church. The two churches are exploring opportunities to bring together members of multiple ethnic and religious groups, along with the police, military and politicians.

“We need to build conditions so sustainable development can happen. That can only happen through peace and reconciliation,” said the Rev. Rafael Malpica Padilla, executive director, ELCA Global Mission. “We need to create conditions for political stability.”

Reflecting on Acts 17:6, Padilla said, “[The ELCA goes] to situations where most people will say, ‘Why is it that you’re there? Who’s bold enough to make this large investment in this country and this community?’ We are.

“Moved by the Spirit, we are those people who go to a country that is ravaged by war, where peace looks like a very distant goal, but we decide to walk with people so that peace will have a chance.”

“We pray for the peace from above”