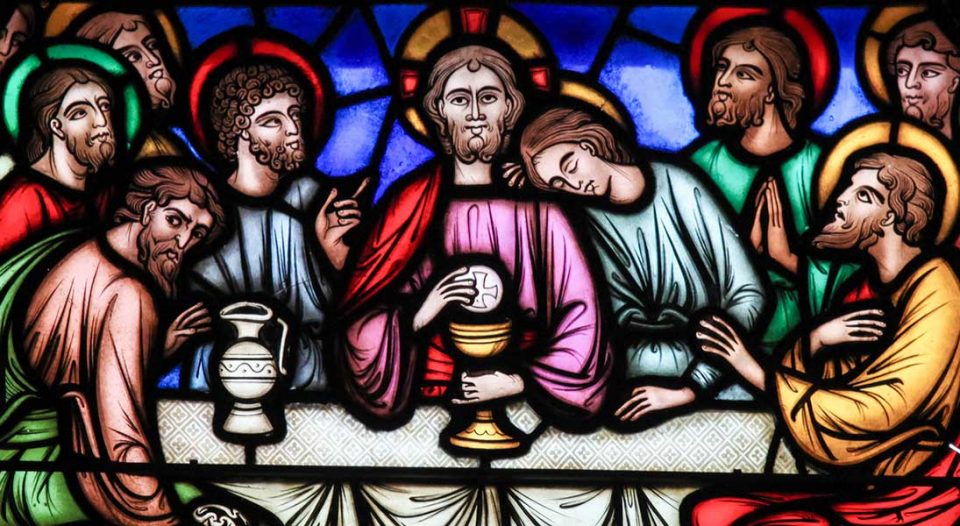 Stained glass window depicting Jesus and the twelve disciples at the Last Supper in the cathedral of Brussels, Belgium.

Marta, my daughter, recently installed a diagnostic device in her car that monitors driving habits. It beeps if she brakes too hard, suggesting a more gradual stop next time. At the end of six months, Marta will unplug the device, mail it away to Progressive Insurance, and Flo will determine whether she qualifies for a lower rate. Pretty neat, huh? Marta’s not so sure.

“Look at it this way,” I said the other day. “Think of this as God watching your every move. But now you’ll learn how you’re doing after six months instead of waiting until the end of your life.”

One of my favorite Bible stories (John 21:1-14) begins one evening in Peter’s living room and turns on a four-word declaration: I am going fishing.

Experiment out loud a bit with how this decision may have first sounded. Vocal tenor is challenging to interpret 20 centuries removed, but it’s important to try. Peter and companions, please recall, were clearly called by Jesus to leave their nets and “fish for people.” A return to their old vocation suggests resignation more than excitement—back to the familiar.

A quick count reveals seven guys—a number hinting difficulty in holding the community together. We recall Judas’ demise, but four disciples are missing: one-third of the group. This old story of a return to routine reveals my own hesitancy in answering Christ’s call, filled with many starts and stops.

Well, of course they catch nothing, not even a minnow, these seven who are not supposed to be out there in the first place. Dawn breaks. In the early mist, they make out a man who is calling from the beach. We know this man; they do not.

The point of recognition interests me. Peter is naked as he fishes. Maybe he was just hot, but it’s possible to have a psychological heyday with Peter’s lack of clothing. When Peter realizes he’s been caught with his pants down at work, he supposedly left—ignoring the clear marching orders of the voice he now recognizes over the waves. The lack of clothing becomes a symbol for what we’ve all felt from time to time: Jesus can see right through him.

Think of Adam and Eve, also naked when caught. The story says: “Peter put on some clothes and jumped into the sea.” Some early church commentators link this action to the ancient practice of donning baptismal garments upon our welcome into the church.

Perhaps you’ve been caught doing something clearly forbidden, powerless to break old habits, old routines. Maybe you feel at times that religion is a theological setup where an all-seeing divine authority waits to catch you in some indiscretion with a diagnostic device that makes the Progressive Insurance beeper look rather lame.

Peter was naked in the boat and Jesus could see right through him. Was he excited to see Jesus? Absolutely. Was he apprehensive about their meeting when he reached shore? I’ll let you decide.

What Peter found on the beach helped shape his understanding of Easter at least as much as an empty tomb. With soggy clothes, he walks toward a man who could have had a straight-forward conversation with our erstwhile fisherman. The first “come to Jesus” meeting, so to speak.

We’re all very dark and rather complicated people. Like Peter, God has given us very specific ministry marching orders. But frequently we have a hard time maintaining the excitement of Easter, God’s clear call in baptism, often falling into routine and old, familiar behaviors.

Jesus can see right through us—our failures, our bad habits. He waits for us on a new shore, points to a fire, to an altar, and “came and took the bread and gave it to them.” He offers four little words. The best possible words: Come and have breakfast.

Christ always feeds us first. In response to this gracious meal, we answer his call to feed others.