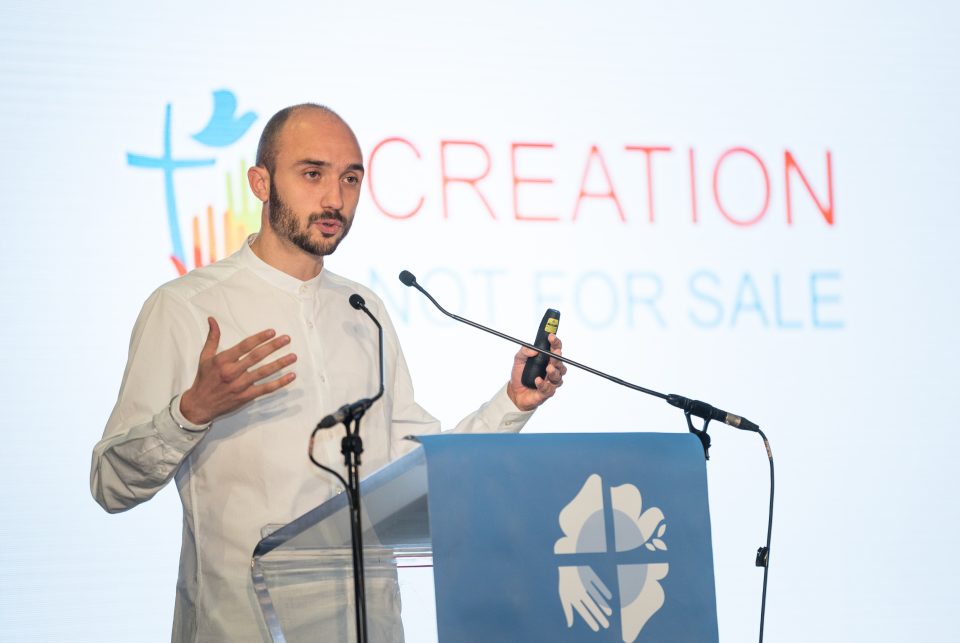 15 May 2017, Windhoek, Namibia: Martin Kopp, doctoral student at the Faculty of Theology, University of Strasbourg, speaks at the thematic plenary on "Creation - Not for Sale", at the Twelfth Assembly of the Lutheran World Federation, which gathers in Windhoek, Namibia, on 10-16 May 2017. The Assembly gathers under the theme "Liberated by God's Grace", bringing together some 800 delegates and participants from 145 member churches in 98 countries. Photo: LWF/Albin Hillert

WINDHOEK, Namibia, 15 May 2017 – “Renew our framework of thought, rethink our economics, and rephrase our common goal,” are the challenges of the 21st century said climate justice advocate Martin Kopp in a keynote speech on the sub-theme “Creation – not for sale”. He gave the main presentation for the third sub-theme of the Twelfth Assembly of The Lutheran World Federation in Windhoek, Namibia on 15 May.

“Our societies and life on earth are risking collapse,” Kopp warned assembly participants. There can be “no human well-being on a dead planet,” Kopp said. He noted economics or the economy was the critical factor in today’s world, and thus the key challenge when confronting the ecological crisis.

Kopp, a member of the Union of Protestant Churches of Alsace and Lorraine in France, is a post-graduate student of theology at the University of Strasbourg, and previously served as LWF’s Climate Justice Advocacy Officer.

Koop said the sub-theme Creation – not for sale identified economics and economy as “main drivers of the world today. Thus, it is first of all economics and the economy we need to challenge.”

In his presentation Koop referred to scientific studies showing that human activity on the earth’s resources or ecological footprint since 1970 has surpassed the planet’s capacity to sustain life.

“We are using the equivalent of 1.6 planets per year. In a word, we are in an unsustainable situation of global overshoot,” he warned. Instead of economic growth for the gain and happiness of humanity, orthodox economists no longer question the necessity of growth he said: “They are searching growth for its own sake.” Kopp said. The models used for this kind of economy however neglect the cost to the environment.

Kopp explained the critical state of the current ecological system by pointing out that four of the nine defined indicators used to measure the planet’s well-being have already been crossed.

He commended the LWF for sustained advocacy for the care of creation, a commitment which the communion first made at the 1977 Sixth LWF Assembly in Dar Es Salaam, Tanzania. “I believe we have reached the point where our core care for creation ethics is theologically mature,” adding that today the question is how to move forward in action, “how can we initiate, deepen and strengthen actions to meet the ecological challenge?

“Communion with the God of life”

Kopp spoke of the need for “a new vision for a new goal” and asked the Lutheran communion to consider actions in three areas. The first, a spiritual one, requires a new way of thinking. “Conversion should occur in our hearts. While obsolete economics values greed, which Paul calls an idolatry, we value satisfaction and simplicity”, he said. “We cannot serve God and Mammon (Mt 6:24).”

The second area calls for concrete change of lifestyle: “We must all do more,” Kopp said. This would entail “each and every area of life” including housing, transportation, food, leisure and clothing, among others.

The third is an appeal for Christians to vote, to advocate and if possible to address climate change on a political level. “It is the opportunity to make our societies thrive, meeting the needs of all within the means of the planet. In the end, liberated by God’s grace, it is the opportunity for us to be in communion with the God of life.” he concluded.