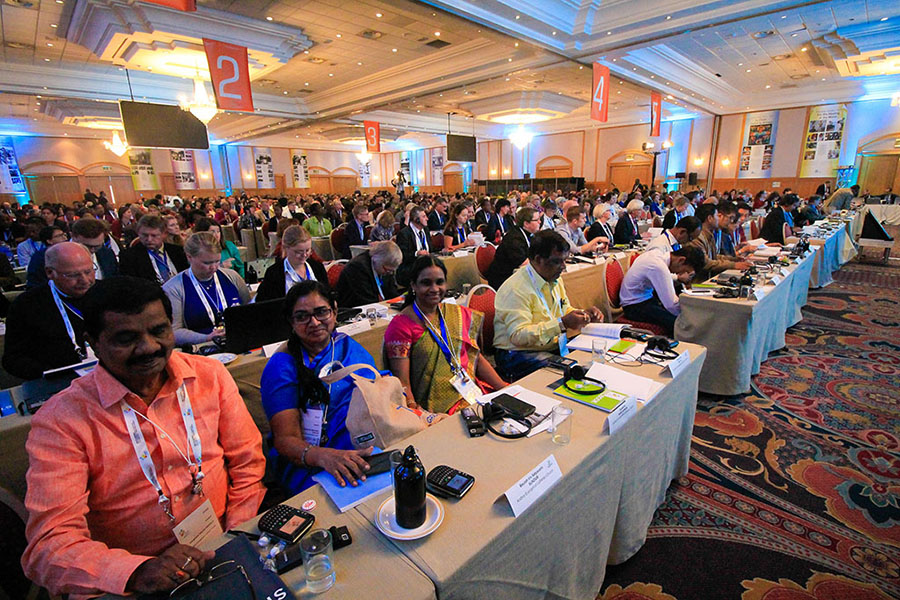 Midday prayer takes place in the assembly hall after the first plenary session of the 2017 Lutheran World Federation Assembly in Windhoek, Namibia.

Evangelical Lutheran Church in America (ELCA) Presiding Bishop Elizabeth A. Eaton and a delegation from the ELCA have joined Lutherans from around the globe for the 12th Assembly of The Lutheran World Federation (LWF) meeting in Windhoek, Namibia, May 10-16. Gathering under the theme “Liberated by God’s Grace,” the assembly brings together almost 800 participants, including 324 delegates. There are seven voting delegates from the ELCA.

The LWF is a global communion of 145 churches representing more than 74 million Christians in 98 countries. The ELCA is the communion’s only member church from the United States.

“The ELCA is one of 145 churches in the Lutheran family around the world. We can see ourselves as part of this global family and that together we can do more,” said Eaton. “This work includes supporting refugee camps for people in Jordan and Kenya and building up churches’ capacities around the world. The Lutheran World Federation also helps us. We have a ministry in Detroit called Grace in Action, and the entire federation is supporting that ministry. This is how we are church together. Our work with The Lutheran World Federation also enhances our ecumenical and inter-religious engagement and witness.”

The assembly is the highest LWF decision-making body and meets every six to seven years. During this gathering, the assembly will speak out on issues concerning the life and witness of the churches and the world. The assembly will also elect the LWF president and council to serve until the next assembly. The current LWF president, the Rev. Munib A. Younan of the Evangelical Lutheran Church in Jordan and the Holy Land, was elected in 2010 and is concluding his term.

The Rev. Lydia Posselt, pastor of Family of God Lutheran Church in Buckingham, Pa., was chosen to preach at the closing worship on May 16. Posselt is the winner of an international preaching contest hosted by the LWF, which invited young pastors from LWF member churches to submit sermons to be considered for the closing worship. The idea was generated from the fact that Martin Luther was 33 years old when he sparked the Reformation in 1517.

A highlight of the Assembly will be the global commemoration of the 500th anniversary of the Reformation on Sunday, May 14, at the Sam Nujoma Stadium. Assembly delegates along with members of the Lutheran churches in Namibia and ecumenical guests will attend the event.

Watch the Reformation commemoration and all assembly events.