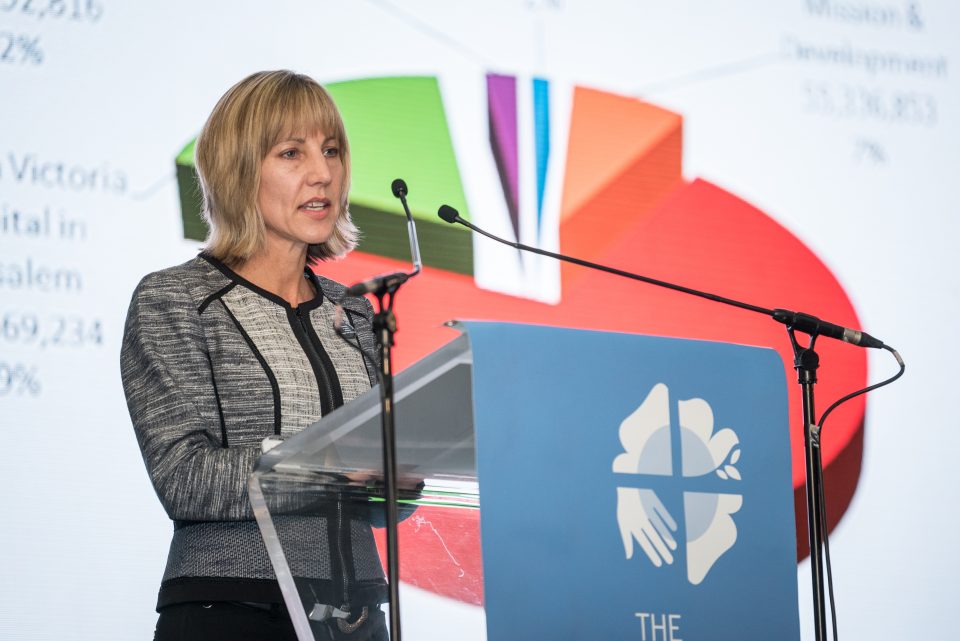 11 May 2017, Windhoek, Namibia: The Chairperson of the Finance Committee, Ms. Christina Jackson-Skelton, gives the report of the Finance Committee at the Lutheran World Federation's Twelfth Assembly. The Twelfth Assembly of the Lutheran World Federation gathers in Windhoek, Namibia, on 10-16 May 2017, under the theme "Liberated by God's Grace", bringing together some 800 delegates and participants from 145 member churches in 98 countries. Photo: LWF/Albin Hillert

WINDHOEK, Namibia/GENEVA, 11 May 2017 (LWI) – The Lutheran World Federation (LWF) can look back on seven years of increased growth in total financial resources during a period of financial challenges worldwide.

The LWF Finance Committee Chairperson Ms Christina Jackson-Skelton gave this synopsis in her report to the Twelfth Assembly meeting in Windhoek, Namibia. She noted, “At a time when many churches and church-related organizations faced financial challenges, we can look back with gratitude for the growth in LWF resources.”

The LWF has been able “to deliver on its mission because of the faithful support of member churches, their related organizations, and ecumenical partners. Together, we are more than funding partners,” said Jackson-Skelton, Executive Director for Mission Advancement at the Evangelical Lutheran Church in America, where she serves as President of the church’s Endowment Fund.

The finance chairperson said that despite declining income from some traditional donors and unfavourable currency exchange fluctuations, LWF’s total annual income grew from EUR 76 million in 2010 to reach EUR 151 million in 2016, an increase of EUR 74 million, or 98 percent. The overall annual expenditure grew from EUR 75 million to EUR 140 million.

The cumulative total income from 2010 to 2016 was EUR 779.3 million, and EUR 746 million was spent to implement the Communion’s strategic priorities.

A total of EUR 11 million or 2 percent went to theological, ecumenical, interfaith and global advocacy work through the Department for Theology and Public Witness. EUR 55 million or seven percent was earmarked to strengthening the member churches’ capacity for holistic mission and communion building through the Department for Mission and Development.

Humanitarian response and development work carried out by World Service took up EUR 520 million or 70 percent, and EUR 143 million or 19 percent, was spent for the LWF-run Augusta Victoria Hospital (AVH) in East Jerusalem.

Organizational support provided by the Department for Planning and Operations, General Secretary’s Office and LWF Governance, accounted for EUR 17 million or two percent over the six-year period.

Increased funding designated for LWF’s humanitarian response and revenue from expanded patient services provided by AVH drove most of the growth, which was partially offset by a decline in revenue for the work of Mission and Development.

Turning to the processes of historic reconciliation in which the LWF has been engaged, he said the October 2016 joint Catholic-Lutheran Commemoration of the Reformation at Lund and Malmö, Sweden, was profoundly significant for the ecumenical movement, and had charted the way forward from conflict to communion. He expressed his hope that the sharing of prayer and mission manifested at the event alongside many other movements in the last decades of Lutheran-Catholic dialogue “will lead to further breakthroughs of an ecumenical spring.”

The LWF president said the joint statement he signed with Pope Francis gives him hope for further work on issues where the two dialogue partners do not agree, namely, ecclesiology, ministry and Eucharist. He spoke of his strong conviction that “Christ’s table of generosity” was not based on one’s Christian tradition, and encouraged the communion to continue to dialogue in response to Christ’s call “to have one Baptism and one Table for the Eucharist.”

A fair membership fee policy makes it possible for all member churches, big or small, and in any part of the world, to be full stakeholders in the life and work of the LWF communion.

For the period 2010 – 2016, the membership fees amounted to a total of EUR 16.8 million, with yearly contributions varying between EUR 2.3 million and EUR 2.6 million. The number of churches paying their annual fair membership fluctuated between 85 and 115 over the same period.

The LWF Endowment Fund, which was established in 1999 to help secure a financially sustainable future for the organization had garnered total contributions of CHF 14.58 million through 2016 against a goal of CHF 20 million by 2017. A revised distribution policy for the fund helps to safeguard the ambition of yearly distributions of its earnings to support LWF programs.