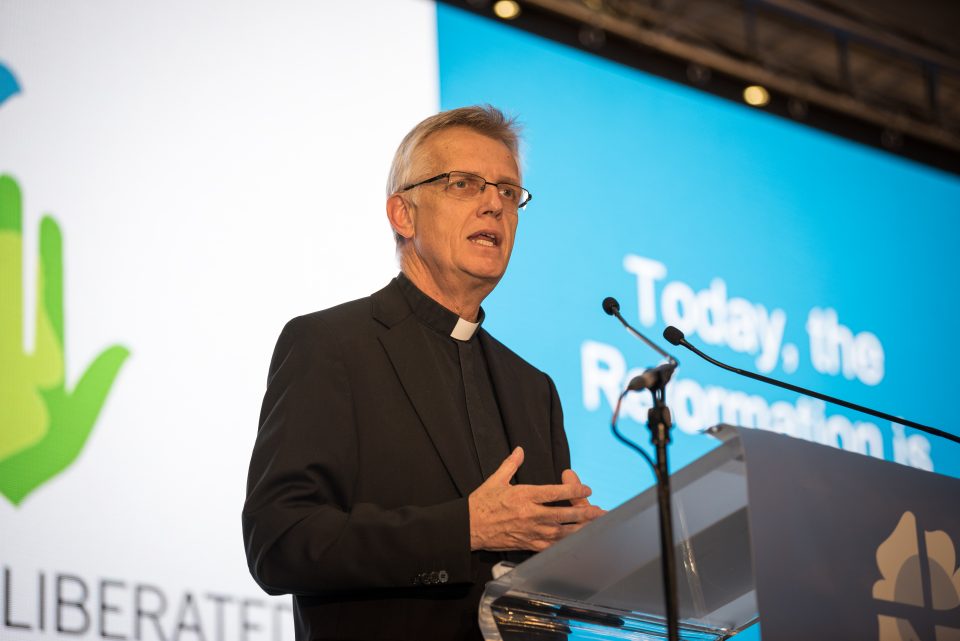 The Lutheran World Federation has issued the following news release.

WINDHOEK, Namibia, 11 May 2017 (LWI) – The 74 million-member global Lutheran communion marks the 500th anniversary of the Reformation as a milestone, and not an endpoint as it witnesses to a fractured world, declared The Lutheran World Federation (LWF) General Secretary Rev. Dr Martin Junge.

The Reformation is ongoing, Junge insisted in a rousing, optimistic report to the Twelfth Assembly of the LWF, meeting in Windhoek, Namibia, on 11 May. Addressing the 800 participants who include 324 delegates from LWF’s 145 member churches, he stressed the global and ecumenical nature of the continuing Reformation.

“Gathered from all over the world, we embody in tangible ways a global communion of churches, rooted in worship, grounded in our theological tradition and actively witnessing to the gospel of Jesus Christ.

“Liberated by God’s grace, we are a communion in Christ that lives and works together for a just, peaceful and reconciled world,” Junge emphasized, referring to the theme of the 10-16 May Twelfth Assembly in Namibia.

The Assembly is jointly hosted by the three LWF member churches in the country under their umbrella body, the United Church Council of Namibia Evangelical Lutheran Churches.

“Here we stand, or should we say, here we journey, at the closing of a rich and meaningful chapter of history of 500 years of Reformation, and almost 2,000 years of being the church. Here we journey, ready to put our feet into the next century.”

No reason to give up hope

Witnessing at a time when the global human family is fragmented and such polarization is often infused by religious language, he said the LWF reaches out in solidarity to its member churches witnessing amid suffering.

“Ambivalent times call for clear positions by our Lutheran communion. What side are we on? What values do we hold? What witness do we offer?” the general secretary asked.

His response reflected LWF’s commitment: “Because of Christ who came to redeem and liberate, there is no reason to give up hope; no reason to be derailed by forces pulling communities apart.”

He continued: “Today, aware of its vocation stemming from faith, the LWF is sought after for its particular gifts, recognized as a faith-based organization that is passionate for peace, justice and reconciliation in this world,” he said. He mentioned significant LWF input into the interfaith statement “Welcoming the Stranger” developed by the United Nations (UN) High Commissioner for Refugees, and collaboration with Islamic Relief Worldwide.

Junge said LWF’s humanitarian work in 24 countries around the world in collaboration with the UN and other partners currently supports 2.5 million people. He cited response to the current high level emergencies in northern Iraq, Syria and Yemen through operations in Jordan and Djibouti, as well as other people seeking refuge from conflicts in places such as the Central African Republic, Chad, Colombia and South Sudan.

Intentional inclusion of women and youth

Today, the global communion of Lutheran churches is marked by the active inclusion of youth and women. Youth lead the communion in addressing climate change and the gender justice movement toward full inclusion of women in church leadership continues.

Junge emphasized the need for the global participation of youth and women to be rooted in their local participation. “[This] participation should not be seen as the fulfillment of a given quota required by outsiders but as a matter of fully being the church.”  The situation for youth in the world has become increasingly challenged, he continued: “If the present situation of youth does not give them much future, what future could our common household have?” This insight is also true for youth in the church, he added.

“The Joint Commemoration represents a visible turning point, a deliberate step to move us away from the conflict that marked so much of our past, to open us up to the communion future into which God calls us,” Junge emphasized. He referred also to other ecumenical milestones including the Mennonite Action of the Eleventh Assembly in 2010, and discussions by the Methodists, Anglicans and Reformed churches on the 1999 Lutheran-Catholic Joint Declaration on the Doctrine of Justification.