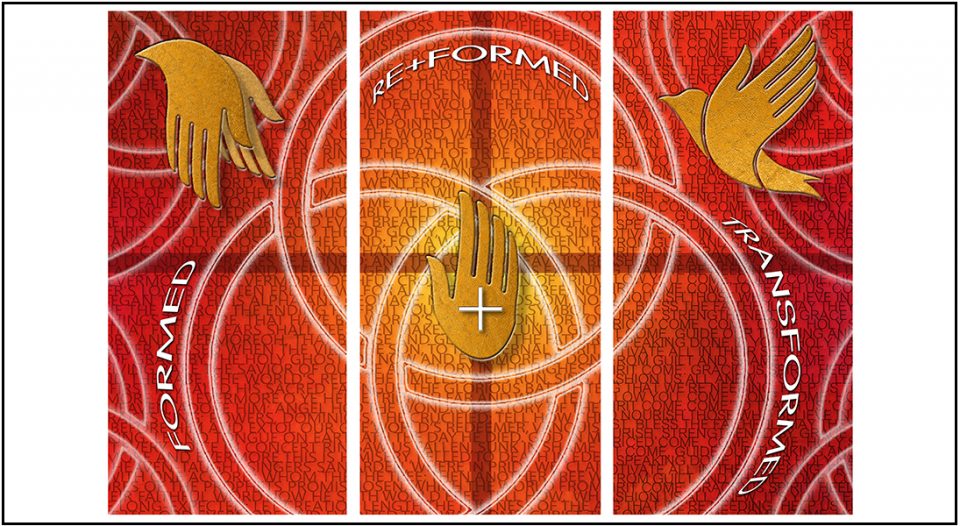 Edgar Degas, the famed French painter, said: “Art is not what you see, but what you make others see.”

With her “Formed, Re+Formed, Transformed” design (left), Linda Henke has created a multi-use Reformation anniversary visual that is a sight to behold—and one that many might see in varying ways. 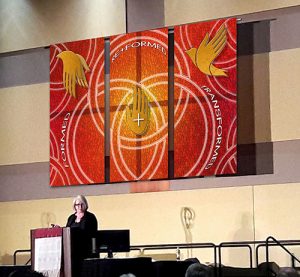 At first, one could connect with the interlocking circles that signal the Holy Trinity, while others may be drawn to the use of the words “Formed,” “Reformed” and “Transformed.” Or, when eyes focus on the backdrop of color and shapes, a set of language emerges running across the banner, row by row, encompassing the entire space.

However an individual initially interacts with Henke’s design, the many aspects tell a complete story true to the Lutheran expression of the Christian faith.

“The three interlocking circles signal the Holy Trinity as the lens for reflecting upon God’s love and faithfulness throughout the ages, reminding us that we are formed in the image of God, reformed through the cross of Jesus Christ, and transformed by the power of the Spirit,” said Henke.

A former ELCA pastor who served in Colorado and is now a full-time artist living in Indiana, Henke has been creating work expressive of spirituality and faith since 2005. Her art focuses on projects commissioned for use in worship and liturgical settings.

“My work typically reflects the seasons, themes and colors of the Christian liturgical calendar that enrich the worship lives of many churches, parishes and congregations,” she said.

For the “Formed, Re+Formed, Transformed” creation, Henke was initially inspired while serving as a member of the ELCA’s task force for the 500th anniversary of the Reformation congregational resources. Her work began by identifying imagery that she could incorporate into an artistic design for the Reformation commemoration.

“It emerged over four or five months with many digital art files,” she said, describing it as one of the longest timeframes in which she’s worked. “Getting the concept together took a while, with many, many Photoshop files.”

She began with imagery from Germany, including Luther’s “solas,” but it was in this process that she struggled to formulate a concept. Then, through inspiration the Holy 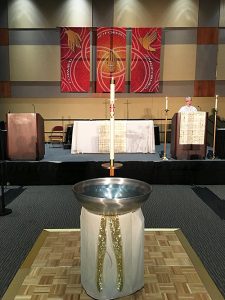 Trinity became the focal point for conveying God’s reforming power throughout history, as seen in one of the physical forms the design takes—a three-banner set.

The art is intended to convey a sense of God’s ongoing activity within and among God’s people, including the background text. This language, pulled from hymns that represent different points in the church’s history, add texture and bear witness to God’s work across the centuries and around the globe.

While the hymn text carries an international message, the imagery of hands in the forefront incorporates a more local context. This central imagery reflects the ELCA’s current emphasis on “God’s work. Our hands.”

The blend of yellow and orange hues ties all the elements together, resulting in a colorful piece of art that has a variety of applications.

“I wanted it to be accessible for different types of congregations and the types of worship spaces that it could be used within,” she said. “Not every space can accommodate three (banner) panels, but without all three, it looks and feels incomplete.”

Congregations are encouraged to be creative when incorporating the design into their Reformation anniversary commemoration.

“There are fresh ways to look at it,” Henke suggested. 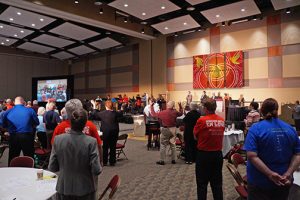 Currently, two congregations and a synod have worked with Henke to incorporate “Formed, Re+Formed, Transformed” into a mix of anniversary tools, including large banners in a fellowship hall, a smaller banner set in the narthex, a digital version for screen projection, a website and in a variety of print uses.

Among those who have experienced the design is the Rev. Karen Scherer, Unity Evangelical Lutheran Church in Bel-Nor, Mo. Her congregation incorporated the banners into their anniversary observance to build toward a final display on Holy Trinity Sunday. Since then, the banners have lived in a prominent place within the assembly’s semicircle seating area, where they continue to remind them that God is with us—forming, reforming and transforming us as the body of Christ for the sake of the kingdom.

“I so much appreciated not just the symbols and richness of color of the design but also the background, which is filled with the words of hymns of praise,” said Scherer. “It fills one with a sense of being surrounded by the great cloud of witnesses whom we join in ever singing praise and glory to God.”

Those interested in incorporating Henke’s design into anniversary activities are invited to contact her for idea starters and examples of how it’s being used today.

If your congregation chooses to incorporate her design in your anniversary commemoration, you’re encouraged to share photos with ELCA 500 on the ELCA 500 Facebook page or via 500@elca.org.