As musical theater shows go, 500 years in the making might be a record.

“Luther the Rock Opera,” based on the graphic novel “Luther,” premiered in Wittenberg, Germany, in mid-June as part of the Luther500 Festival. Although the two projects are related and have the same collaborators, each took different paths to final production in time to commemorate the Reformation’s anniversary. 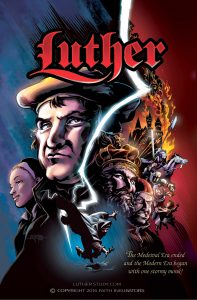 The cover of Luther, the graphic novel.

A book born and resurrected

Released in early 2017, the graphic novel “Luther” is the brainchild of Rich Melheim, who started the project while working on marketing of the 2003 film of the same name. He began research while looking for a premise on which he could base the story – something different from the norm that told the story of Martin Luther and the Reformation from a new angle. The story was pieced together when he discovered old, rarely seen writings in the bowels of a Lutheran seminary.

“I found nuggets of information (in other writings), but I wanted to find something that could tie it all together,” said Melheim, an ELCA pastor who has since become an entrepreneur and author. “I ran across a double volume set from 1832 written by an Irish theologian, which had some amazing historical tid-bits and nuances. Then, it occurred to me: The chief supporting actor was Elector Frederick.”

Frederick, as Melheim’s book points out, was the nobleman who owned and ran the university to which Luther was sent following his monastery assignment in Erfurt, Germany. Frederick owned the second-largest relic collection in the world outside of Rome. It was calculated that by venerating every one of Fredericks’ relics, one could shave 1.9 million years off purgatory.

As Melheim explored this central character more, questions surfaced that needed answers and later became pivotal story points: Why did Frederick – who was making lots of money from his relic collection – support a stormy monk who didn’t relish his relics? Why did he later put his own life on the line to protect and hide Luther? How long did it take for Frederick to arrange for Luther’s hiding?

Melheim found the answers to his questions through research on Giovanni di Medici (aka, Pope Leo X). Within the first year and a half, he’d completed the concept and written the first third with collaboration from illustrator Sherwin Schwartzrock.

As the 2003 movie began production, Melheim’s work hit a roadblock: the sponsoring organization put it on hold. Perhaps it was a blessing in disguise, since the Reformation anniversary was more than a decade away.

Two years ago, Melheim resurrected the project and, at the recommendation of Schwartzrock, enlisted the help of graphic artist Jonathan Koelsch. The charge was for Koelsch, a comic book lover since age 7, to complete the book in time for the start of the anniversary. He rose to the challenge, finishing the final 43 pages in 2½ months. 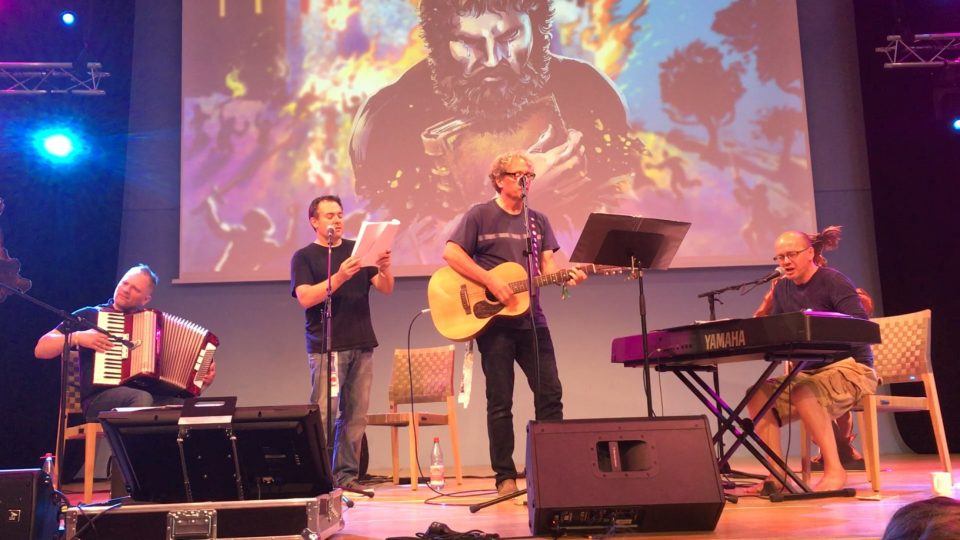 Animation by Jonathan Koelsch served as a backdrop to Luther the Rock Opera at the Luther500 Festival in Wittenberg.

“It was a tight deadline and a pretty intense one, as comics go,” said Koelsch. “It was a very fast turnaround without sacrificing quality, since there are all kinds of hidden rules in visual sequential storytelling. It requires and invites an opportunity to show, not tell.”

With the volume of knowledge and research Melheim had incorporated into the story, the illustration proved tedious. Koelsch had to find a way to take the stockpiles of information and condense it to make it accessible for everyone.

“That was the biggest challenge: relating all of the moments and make them interesting, down to the final details.”

With a 73-page book written, illustrated and colored, Melheim was invited to speak at the Comic-Con International convention in San Diego in July 2016.

“This was the first time that anyone had seen a Christian novel done at such high-quality story and art,” said Koelsch. “It was a fluke that we could make it happen.”

Melheim introduced the book to thousands of fans of the genre from the stage. By November, as the print release neared, the distribution rights had been sold for release in several languages. Now, a year since that initial public introduction, “Luther” has been translated into German, Dutch, Portuguese, French and the Nordic languages, with nearly 40 other languages on the horizon.

With “Luther” solidified as a graphic novel for readers around the world, Melheim’s Faith Inkubators publishing company features “Luther” as a tool in a larger, comprehensive set of cross-generational Small Catechism series for English-speaking fans. The book is accompanied by 12 weeks of giant, tabletop coloring pages, PowerPoint lessons, bulletin inserts and coloring books featuring art from the graphic novel and musical.

Although Lost And Found band members Michael Bridges and George Baum stopped touring a while ago, their appreciation for the arts – and the Reformation – has lived 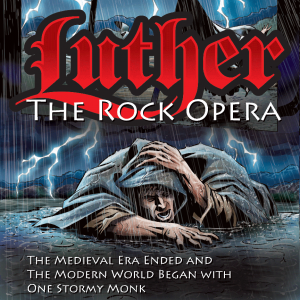 Performing together since high school, they have traveled around the world to encourage all who hear them to “do what you can with what you have for the glory of God.”

As the brains behind the Luther500 Festival in Wittenberg this year, Bridges wanted the Reformation to be more than a fleeting thought.

“I didn’t want it to just become another handshake in front of the town hall,” he said. “We needed something where people could really participate.”

The festival, which features Luther’s story as a rock opera, launched in May and continues into the summer as an immersion-style experience, including service projects and worship.

But long before “Luther the Rock Opera” made its debut in Wittenberg, Bridges and Baum reconnected with their friend and now collaborator Melheim in Colorado.

“They came out to do a book-release party for our national cross-generational Sunday school conference,” said Melheim. “I shared with them the idea behind ‘Luther’ and we all agreed: ‘Let’s do a rock opera!’.” 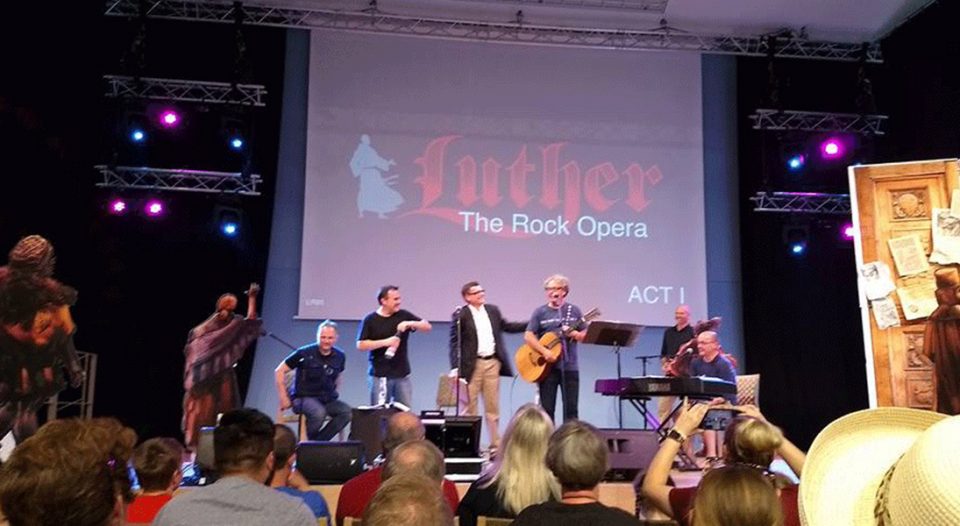 At the same time as the graphic novel’s completion, Bridges, based in Los Angeles, and Baum, now an Episcopal priest in Ohio, re-formed their partnership, spending a lot of time on the side crafting lyrics and composing the musical score to fit Melheim’s story.

The graphic novel had so much content to work with that Bridges and Baum had to be selective about what to include in the musical version of the story. Bridges compared it to condensing a book to a movie, teasing a viewer with the plot and encouraging them to read the book and understand the full story.

The show is a series of 24 songs that tell the story of Luther similar to that of some of the great rock operas before. “It’s ‘Jesus Christ Superstar’ meets ‘Hamilton’ meets Monty Python,” said Melheim.

Although its songs are content rich and can be performed in large-scale productions, “Luther the Rock Opera” can also be performed for a congregation with minimal production and rehearsal time as a one-hour concert with animations by Jonathan Koelsch. Bridges said this means it can include anyone who wants to be part of the event. 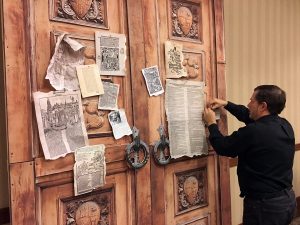 Set pieces from Luther the Rock Opera included a set of doors to which Martin Luther nailed the 95 Theses.

“It gives everyone an understanding of the Reformation,” he said, “but it means that everyone at any age can get involved; there’s something for everyone. They can build something, participate or act. Everyone who has been in a show knows it’s a community-building experience.”

In addition to the music, the full production can be sized to fit any space, noted Koelsch, who helped to develop set and visual ideas for the full show.

“It’s a show that is easily viable and replicable for churches of all sizes,” he said. “With the on-screen animation (from the larger show), it can fit the need in whatever application you need to help tell the story, to bridge the gap in ways that you can’t do in a set or musical.”

To access “Luther” the graphic novel, visit faithink.com. For those who would like to produce “Luther the Rock Opera,” visit luthertherockopera.com or contact Rich Melheim at rich@faithink.com.

If your congregation chooses to use either the graphic novel or the musical production, you’re encouraged to share photos with ELCA500 on the ELCA500 Facebook page or via 500@elca.org.