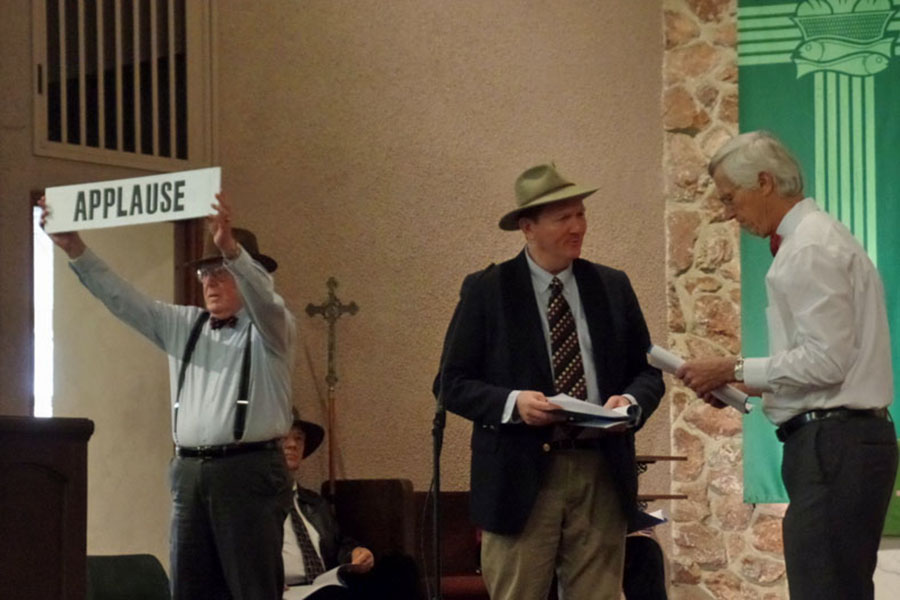 Members of Emanuel Lutheran Church, Modesto, Calif., perform "You Were There—The Reformation," presented in the style of an old-time radio show.

Sermons, as many know them, are oral remarks steeped in theology, often paired with lessons from current or modern-day life.

But members of Emanuel Lutheran Church in Modesto, Calif., were treated to something unique during worship on four different Sundays. Instead of a sermon, they were sent back in time to the 1940s when radio was the primary form of mass communication. And it’s here, in the old-style radio shows, that the You Were There series was born in 2015.

Author and church member Michael Clarke has written four shows in the series. Each show runs 30 minutes and features a radio show host interviewing the play’s characters. The last in the series honors the Reformation anniversary and debuted on Sunday, Feb. 5, 2017. 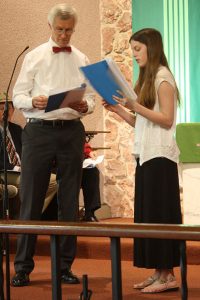 The host interviews a young girl at Martin Luther’s trial.

Clarke, a retired periodontist, created the series based on his experience with the You Are There CBS Radio series, which he listened to while growing up. The You Were There series pays homage to the real-life radio show, blending history with theater, taking listeners on a time warp each week to report the great events of the past. For his shows, Clarke remained true to the original concept but took a theological angle for his subject matter.

The You Were There plays originally introduced his fellow congregants to people who knew Jesus and shared their memories of his life and ministry. The initial series—featuring the birth of Christ, the Last Supper and the Resurrection—was well-received, so he decided to write a Reformation-themed show.

For You Were There: The Reformation, the radio show host interviews people who knew Martin Luther. Clarke features Luther’s sister, who remembers their childhood; Yohann Tetzel, a Dominican friar; and Rabbi Josef, a childhood friend who responds to questions about Luther’s writings on the Jews. A seminary classmate, a Roman Catholic cardinal, and a young girl who witnessed Luther’s trial complete the cast.

This production, like the others, was born out of a passion for writing. As an English major in college, Clarke returned to writing as a retirement hobby. “I started writing performance pieces in college,” he said. “When I retired in 2001, I started writing again and have completed a number of projects, many for our congregation.”

In most cases, Clarke spends four months writing, although not in continuous effort, given that he does so part time.

“My writing time reflects the intervals between the initial ideas and the performances,” he said, “with the time varying depending on my other activities and obligations. … The writing of the Reformation play required additional research to fill in some of the gaps—details mostly—in my knowledge of the overall Luther story.” (Clarke’s primary reference was Martin Marty’s Martin Luther, 2004.) 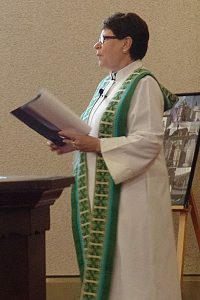 Once he’s satisfied with the final written product, the show goes into production, with parishioners volunteering as actors. An initial read-through of the script is followed by rehearsals in the sanctuary. Included in the troupe is Emanuel’s pastor, Lyn Crase, who introduces each show.

Like the other shows, this one doesn’t require the actors to memorize dialogue or wear costumes, though some of the performers chose to dress up in 1940s attire.

Since Emanuel has produced You Were There: The Reformation, Clarke said the show has had five requests for the script: two Illinois congregations and one each in California, Minnesota and New Hampshire.

For information on how your congregation can access and produce You Were There: The Reformation, contact Michael A. Clarke at clrksville@att.net.

If your congregation chooses to produce Clarke’s show, you’re invited and encouraged to share photos with ELCA500 on the ELCA500 Facebook page or via 500@elca.org.