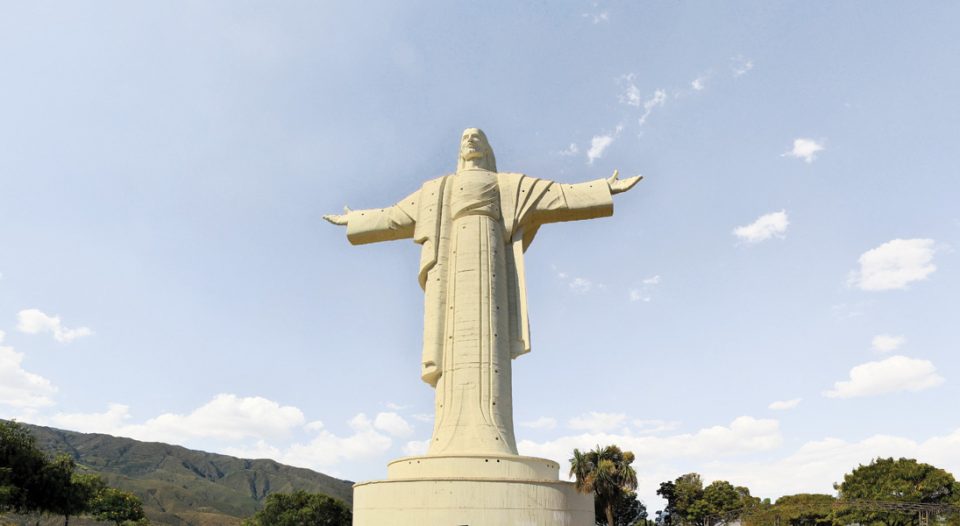 The largest statue of Jesus Christ in the world, the Cristo de la Concordia in Cochabamba, Bolivia

Lutherans from all over the world hear the word of God in their native languages. Growing up as a Latino Lutheran in south Texas was no different. It meant that I heard and learned the Scriptures in Spanish.

The Latin phrase sola scriptura is a foundational Lutheran Reformation confession that in Spanish translates as solo la escritura. It means that the Scriptures rightly understood are the sole authority and basis for our understanding as Lutherans. To confess solo la escritura is to say that the community won’t rely on human works or efforts to gain righteousness before God. We are justified by grace alone (solo por la gracia in Spanish) through faith alone (solo por la fe), in Christ alone (solo por Cristo). That is how we understand our identity as members of the reforming movement of the catholic church.

We hear the message of the gospel through a Lutheran hermeneutic that values Scripture alone as the sole authority for our justification before God. We understand ourselves as justificados por la gracia a través de la fe or justified by grace alone through faith alone and without the need of works to merit our salvation.

The cradle of the gospel

Martin Luther referred to the Scriptures as the “cradle of the gospel.” By that he meant the Scriptures contained the message of a loving God who in Christ becomes encarnado or embodied in human form to reveal that love in a saving work on the cross. Lutherans have made this confession of faith for nearly 500 years of Reformation history and know it as the second article of the Apostles’ Creed.

Luther wrote the Small Catechism to instruct Christians and convey the message of the gospel. His explanation of the Apostles’ Creed summarizes the essence of the Scriptures that reveal the saving and loving work of God in the person of the Christ. Luther helps us to understand that the Scriptures are the words of God’s love for the world as revealed in the life, death and resurrection of Jesus.

Finding unity in the gospel

In south Texas we learned the Small Catechism in Spanish or, as we like to say, “in the language of the heart.” We heard our sermons, sang our hymnody and said our prayers in Spanish. We learned our Lutheran confessions in the language of the people. Not only did that practice make us distinctive as Protestant Latinos and Latinas, but it also differentiated the Spanish-speaking community from the larger church.

This practice also created theological and confessional difference and distance from our Roman Catholic family members. We practiced our faith with a sense of being different from others and yet within part of the larger community of faith. We were a Protestant Latino minority within the larger church and a Latina cultural minority within the larger Anglo culture. What this double minority status created was a cultural and theological dislocation. We experienced a double marginalization that was an unintended outcome of the Protestant Reformation move­ment that began 500 years ago and that arrived in south Texas 100 years ago. What united us was our common confession of Jesus Christ (solo Cristo) as Lord of the church universal.

Today the church is working to bridge the divide that this second schism created when cultural minorities became part of the Reformation movement. As the church we are the body of Christ entrusted to bring the gospel of peace and goodwill to a fractured world.

The Scriptures (sola scriptura) are the guide that point us to Christ (solo Cristo) as the mediator between God and humanity and the one who calls the church to unity. Solo Cristo can bridge the divide that once separated the church. His prayer for unity in the Gospel of John compels us to work together to build the body of Christ on earth. Working toward unity is a sign of God with us.

This effort extends to bridging the theological divide as recently evidenced by Pope Francis’ visit to Lund, Sweden, and by ecumenical prayer services held in many settings. The differences that divided us 500 years ago need not hinder the work and mission of the church. It should bring us together for the sake of the life of the world!

Author’s note: The words Latino and Latina have been used interchangeably to reflect inclusivity.