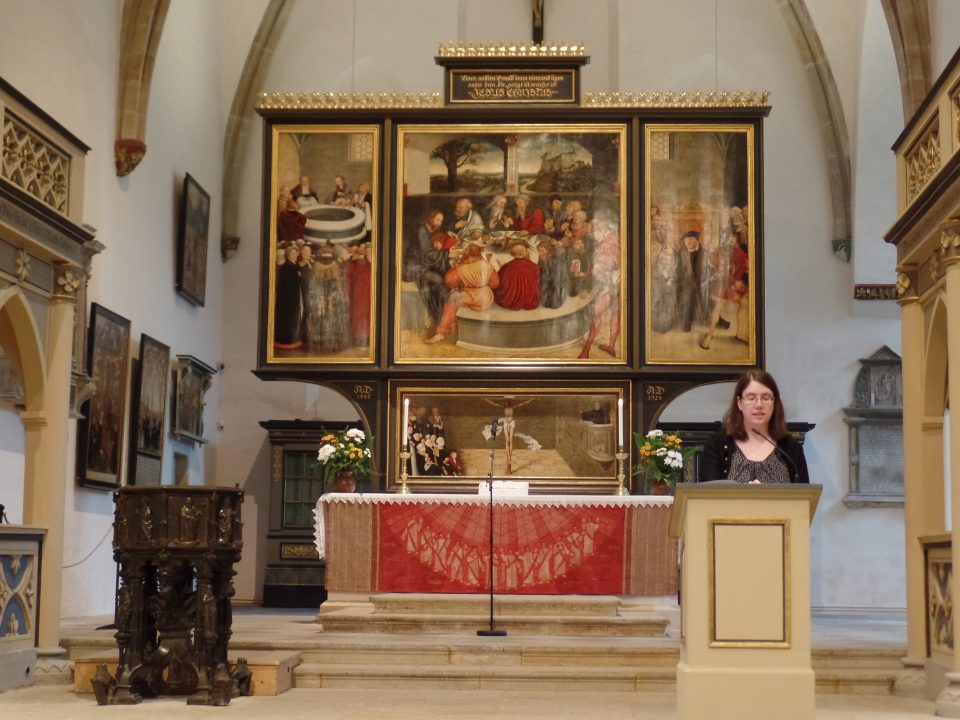 Heather reads from the pulpit in town church

The 500th anniversary of the Reformation gives us an opportunity to take history beyond a textbook and to think about the reformers in new ways. One way to do this is to visit Luther Country – the towns in northeast Germany where Martin Luther and his colleagues lived and worked.

As a member of the ELCA churchwide organization team working on the 500th anniversary, I wanted to learn more about the Reformation and get a sense of what folks traveling in honor of the 500th might experience. In fact, I gained much more. Here are five ways the Reformation came alive for me in my travels:

1. Wittenberg as college town and community
Luther wrote the 95 theses in 1517. However, the University of Wittenberg (right) – where he taught – was only founded in 1502. Wittenberg is a very small town, and the 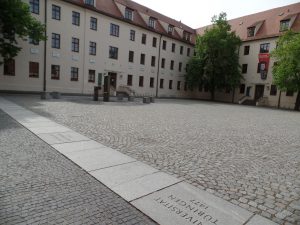 university classrooms, church and homes were all within an easy walk of each other. Being in that tightly knit space and knowing how young the university was, it’s easy to imagine how energetic of a community it would have been and how Luther’s new ideas could have been uniquely nourished in such a new institution.

One of the challenges the reformers faced was how to help the poor in Wittenberg once the convents and monasteries – the social safety net of the time – were gone. Luther proposed a common chest that would be publicly funded to help those in need. He also advocated schools for young boys and girls, wanting to make sure everyone could read Scripture. Not only did the reformers reimagine church practices during this time, they began to reimagine their society.

2. Katharina Luther, business leader
Going into my trip, I had heard jokes about how Katharina Luther brewed beer. However, being in Martin and Katharina’s home – a 40-room monastery – gave me a clearer sense of how large their enterprise was. In addition to their own children, they had relatives, visitors and university students as young as 13 living with them. Katharina’s cellars have been excavated, and you can see just how much food needed to be grown and purchased to feed all of those people – typically 30-40 diners per meal. As Martin wrote and preached, Katharina made sure they would not slip into debt – a real threat as he had no fixed salary. Martin’s enterprise was a risky experiment, and it would not have worked without a partner like Katharina.

3. The women behind the scenes
After realizing the extent of Katharina’s importance in the Reformation movement, I learned more about the role of the other women whose names I had never heard before, like Walburga Bugenhagen and Katharina Melanchthon. Born into a noble family and raised in a convent, Luther’s future wife, Katharina von Bora, would not have known anything about household management or budgeting. After she ran away from the convent, she stayed in Wittenberg in the home of Lucas Cranach the Elder. His wife, Barbara, became a great friend of Katharina’s and taught her the skills she would later use to run the Luther household after her marriage. Walking around the beautiful homes of Wittenberg from the 16th century, it’s easy to forget that it was women who were behind the scenes keeping things running. These women, like the ones who decided to leave their convents to join the Lutheran movement, had theological ideas. Some women, like Argula von Grumbach and Katharina Schütz Zell were able to share those in the public spheres. Others lived their theology of grace through their hospitality, household management, and care for others. Being in Luther Country helped me appreciate the importance of those women whose names have been lost to history but were essential for the Reformation to flourish.

4. The ordinary folk
Wittenberg has two main churches: the Town Church and the Castle Church (right). The imposing Castle Church is where the university professors and students 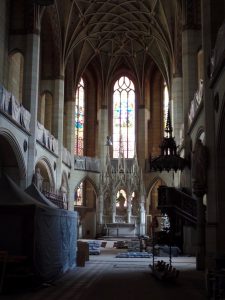 worshiped. The Town Church is in the center of town and feels warmer; this is where the townsfolk would worship. Seeing them so close together and yet so distinct is a visceral reminder of the class differences of Luther’s society. And yet, Luther preached in both places. As he liberated God’s Word of grace and Christian freedom on paper and in the pulpit, the ordinary people in Wittenberg and all over Europe were captivated by his ideas. Luther’s writings went viral because of the printing press, but it took people from all walks of life to spread the buzz. Being in Town Church taught me in an embodied way the importance of everyday people to Luther and to the movement and how we’re still connected to them today as we discuss the same texts and sing the same songs.

5. The firsts
Going to Luther Country, I knew theologically why the Reformation was important. However, many of the “firsts” caught me by surprise. For instance, Wittenberg is the home of the “first parsonage.” Johannes Bugenhagen, Luther’s pastor, was the first pastor to have a family with a family home – something new and controversial then that we take for granted today.

The town of Torgau was home to the first church choir with lay members, though they were all men. The Reformers believed in the spiritual and educational power of music and that, therefore, lay people should participate in music – in their native language – during worship. The first church to be consecrated as Protestant is also in Torgau. The pulpit is the centerpiece of the space, symbolizing the importance of the Word and the sermon to the Lutheran movement. Incidentally, pews became much more common during the Reformation.

For me, visiting Luther Country made the people of the Reformation more real, those whom I had studied and those who have been forgotten. Walking through their homes and worshiping in their churches drove home for me how human they were, rather than two -dimensional figures from a textbook. At the same time, learning more about the Lutheran movement also impressed upon me how radical, creative and scary a time it was. These first pastors’ wives dealt with many of the same struggles we have today – budgeting, raising children, suffering through miscarriages – but they also had to deal with a malicious public eye that was waiting for a sign that God frowned upon their marriages. Ordinary people had grown up hearing stories from the Bible and going to church every Sunday just like many of us do today. However, during the Reformation, suddenly they could read the Scriptures for themselves, cast away fears related to accumulating good works, and communicate directly with God without intermediaries. I can’t imagine how liberating and empowering that must have felt.

Being in Luther Country showed me that, just as we go through our daily lives today while the world changes rapidly around us, the Reformation was filled with folks, beyond Luther and his famous friends, who were doing just the same thing, relying on God’s love and grace and our communities to support us.

Though the ELCA 500 team did not fund this trip, I would like to thank Christian Eggert of the College of Wittenberg for his hospitality and gracious help navigating a brief train crisis, the Rev. Dr. Ernie Simmons of Concordia College for letting me tag along on his faculty tours, and especially the Rev. Dr. Kit Kleinhans for taking time out of her own trip to show me the Reformation in 3D.

Heather Dean
Heather Dean is program coordinator for theological discernment at the ELCA churchwide organization. As part of the 500th anniversary team, she organized the Grace Gathering in 2016. Outside of work, Heather loves to travel and would love to get back to Luther Country now that all the scaffolding is gone.