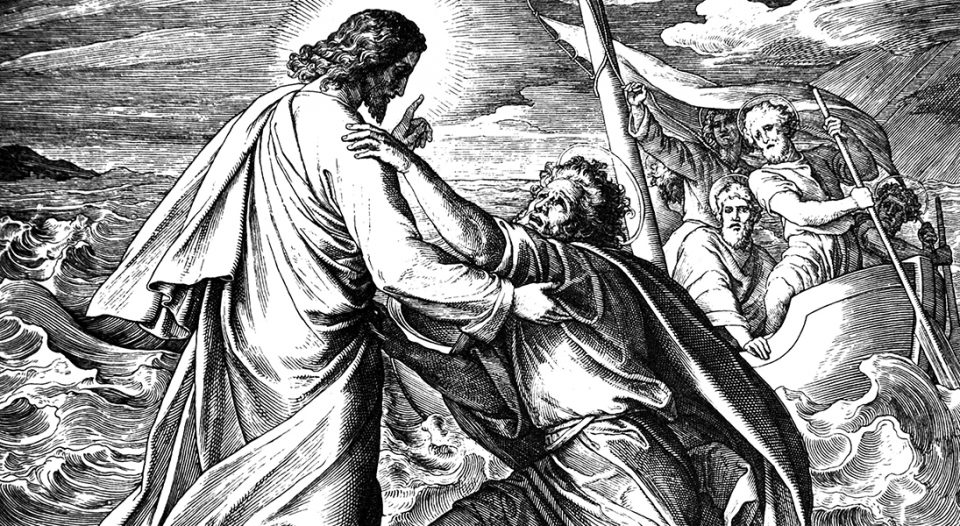 About 20 years ago, the WWJD—“What would Jesus do?”—bracelets were all the rage among hip and with-it youth ministers and youth groups. I did not have one. At confirmation camp at Lutheridge in the North Carolina mountains, or during the Southeastern Synod’s week-long youth event AFFIRM, or on a youth weekend retreat somebody would ask me why, and I usually said something like, “‘What would Jesus do?’ is too high a standard for me. I’m thinking of getting a WWPD T-shirt made.” “WWPD—what’s that?” they would ask. I would say something along the lines of,  “What would Peter do?—that’s a model of faith I think I can manage.”

This issue of the difficulty of our actual ability to do what Jesus would do is played out for us in today’s Gospel lesson and by Peter himself. Last week we heard how Jesus put off his time of personal retreat and prayer, his time to mourn the death of John the Baptist while gathering himself for the sure and certain cross he knew he would soon have to bear. He put it off because “he had compassion” and chose to preach, teach, heal and feed the thousands who gathered to see him. But, finally, he slipped away for time alone, sending the disciples ahead in the boat across the sea. And early in the morning he came strolling across the water to his disciples in the boat. They spotted Jesus, and as the others cowered in fear, Peter called out:

“Lord if it is you, command me to come to you on the water.” He said “Come.” So Peter got out of the boat, started walking on the water, and came toward Jesus. But when he noticed the strong wind, he became frightened, and beginning to sink, he cried out, “Lord, save me!” (Matthew 14:28-30)

Trying to be like Jesus, and failing, failing miserably. There are days when that feels like the story of my life. Every day I wake up with vim, vigor and a new determination to move mountains in the name of the Lord. And every day, by early afternoon, I am looking up to the heavens and crying out, “Lord, have mercy.” And every night I go to bed saying, “Lord, forgive me. Lord, thank you for getting me through the day. Lord, be with me tomorrow.”

Trying to be like Jesus, and failing, failing miserably. There are days when that feels like the story of my life.

What happens? Why did Peter sink beneath the waves? Why do we start out new days, new ventures, new relationships, new ministries, new anything so full of excitement and good intentions and then, all too often, lose hope, lose faith, lose our way? What happens?

In his book One Crowded Hour, Tim Bowden writes about a small war in Borneo in 1964. The nations of Indonesia and Malaysia got into a shouting match that turned into a shooting match. Because of treaty relations, a group of Gurkhas from Nepal were sent to aid the Malaysians. Not long after they arrived, they were asked if they would be willing to jump into combat in a surprise attack. Because they were not trained as paratroopers they had the right to refuse.

The Gurkhas usually agreed to do anything they were asked, but this time they said no. The next day, one of their leaders came to the high command and reported that they had met and reconsidered and would make the jump but only under certain conditions. First, the land had to be soft and marshy. The officer replied that the jump was to be in the jungle, so that would not be a problem. Second, the planes would have to fly as slow as possible and not over a hundred feet above the ground. The officer replied that the planes always flew very low, but the hundred feet would be a problem. At that height, the parachutes would not have time to open. When the officer said that, the Gurkha leader smiled and said, “Parachutes? You never said anything about parachutes. Of course, we’ll do it.”

Why do we have trouble “doing what Jesus would do” or something similar? Because, all too often, we are like the Gurkhas. Though we are willing to fully commit ourselves to a cause, we frequently forget one vital thing —we don’t have to do it all on our own. The Gurkhas forgot, or never knew, about the parachutes. They faced the problem, and they faced their fear, and because they thought they had to do it all by themselves, using only their own ability, skills and resources, they hesitated. They sank beneath the challenge. They attempted to pare the job down to something they thought they could manage on their own. They were willing, they were enthusiastic, they were willing to try, willing to go beyond the normal call of duty. But they were also limited, limited to what they were capable of accomplishing on their own. They forgot about the parachutes.

Although we, as individuals and as congregations, commit ourselves to do our best to “do what Jesus would do,” we frequently limit ourselves to doing only those things we are sure we can handle on our own, Like the Gurkhas, we are ready to give our all, but, also like the Gurkhas, we have left out the most important part of the equation: We forget about what God in Christ has done, and we forget about what God in us, the body of Christ in the world, can do.

In the long run, the most accurate bracelet would be WWGICDIATU. “What will God in Christ do in and through us?” A little long for a bracelet but just right for wearing on your heart.