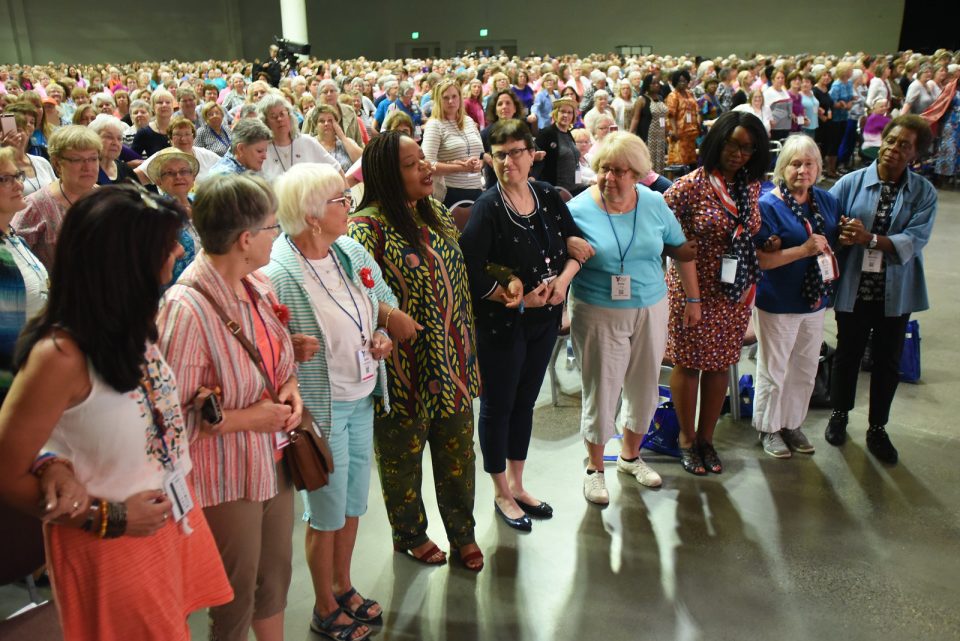 Tenth Triennial Gathering | Leymah Gbowee joins hands with the audience after her keynote.

The Rev.  Jackie Utley of Ascension Lutheran Church in Columbia, S.C.—the first African American to be ordained in the ELCA in South Carolina—came away from the recent Women of the ELCA Convention and Triennial Gathering in Minneapolis with a new sense of purpose for herself and for her congregation.

“For me, it felt like a revival,” she said in an interview after the event.

The Tenth Triennial Gathering attracted 3,322 women from all corners of the country, from Alaska to Puerto Rico. Pastor Jackie was among 1,300 participants who attended for the first time.

“It’s called the Gathering because of the women from all different parts of the country that come together” she said. “It was awesome to see all the women.”

One gathering custom that delighted Pastor Jackie is the tradition of exchanging small, unique gifts or tokens with someone from another synod.

One of the biggest takeaways for her was a presentation by Leymah Gbowee, a Nobel Peace Prize winner and ELCA International Leaders scholarship recipient. Gbowee played a part in ending the Second Liberian War in 2003 by assembling thousands of women who prayed in the streets of Liberia to end the war.

“Her presentation was so moving,” said Pastor Jackie.

Other Gathering speakers—Alexia Salvatierra and Kelly Fryer—also had an impact on the pastor. She described hearing about what “people in third-world countries go (through) with drug cartels. Mothers giving up children so the children can be safe. It was so moving and it stirred my heart to be more active with refugee and immigrant programs.”

“They stirred your heart to want to support and be active in Lutheran refugee services,” she said.

A theme that Pastor Jackie really appreciated was that it’s not only about the ELCA, “it’s about helping others, the refugees and immigrants.”

Another activity she enjoyed at her first Women of the ELCA Gathering was a spiritual writing workshop. She said the workshop helped her put together her thoughts and focus on how to better be a part of the congregation through journaling. She said that keeping a journal gives her a perspective and self-awareness that helps her determine direction for herself and for her congregation.

Like many of the women who attended this year’s Gathering, Pastor Jackie came away feeling revived, encouraged and connected with so many new people from across the country. And she’s already planning for the next Gathering in three years. “I’ll be there,” she said.