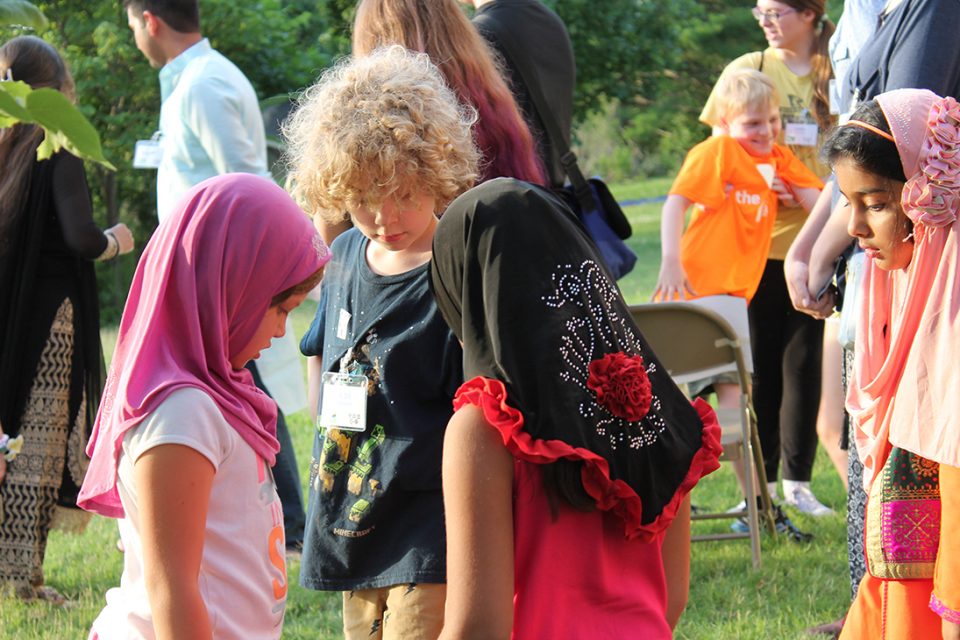 Children from Peace Lutheran Church, Washington, Mo., met with neighbors of other faiths while participating in Vacation Culture School.

Ever wished to explore the other religious groups in your community? Ever wanted to learn more about the faiths and traditions of your neighbors?

Aimee Appell, pastor at Peace Lutheran, said she came up with the idea of VCS after cultivating a relationship with some of the Muslim families in her neighborhood.

“I [thought] people here need to know that there are neighbors in our town who are of different faiths because the assumption here is that this is a Christian town,” Appell recalled. “I realized that people just don’t have the opportunity here in this town to really engage with other faiths.”

After putting out some feelers in her community to find others who were interested, as well as bringing up her concerns to her organization, Neighbors United Undoing Racism, of which she is president, Aimee’s idea began to come into fruition.

“We got together and started talking about it and started doing some research and pretty much came to the conclusion that the first thing we had to do was to make connections and find people from [other] faiths that would come and represent themselves,” Appell explained. “We didn’t know enough to represent them … we wanted to have that authenticity and we really wanted people to connect to their neighbors.”

Appell and seven other women, either from her congregation or from the community, put their plan into action and organized their first VCS.

Structured similarly to vacation Bible school and open to people of all ages, there were five days of activities, games and food. Each focused on a different religion: On Monday, Christianity and the African-American tradition of Juneteenth—the celebration of the Emancipation Proclamation—were explored. On Tuesday, a Jewish family shared their Shabbat traditions with attendees. On Wednesday, four Muslim families hosted a Q&A session with adults while the children played games and at sundown everyone prayed and broke the Ramadan fast together. Thursday was all about Hinduism; people from the Hindu temple in St. Louis taught guests how to wrap a sari, did henna tattoos, played games with the children, talked about their beliefs, and showed slides of Hindu temples. On Friday, the last day of VCS, the master and two venerables from the Buddhist temple nearby led attendees in meditation, gave a presentation and answered questions while children played with zen rock gardens in the sand.

“I believe we now have a better understanding of our brothers and sisters and respect them in their form of worship,” said Patricia Bowers, a member of the VCS committee, after praising Appell for a job well done. “I think it made us realize that at the end of the day we all worship and in some way are looking for the same things.”

“This is just the kind of thing that our country needs right now, because there’s so much fear of the other and so much heightened rhetoric that’s demonizing people, and this is a way to do this in a place that people feel safe,” Appell said. “People feel safe at vacation Bible school, you know?”

Appell is working on a free online curriculum for other congregations detailing how to put together their own VCS week. Though she advises anyone who wishes to do something like this to start making connections with people of other faiths in their community.

“Because we had been doing work in the church already, people trusted us when we invited them to come and share about their faith,” she explained. “They knew that we were sincere, that we weren’t going to burn them, that what we really wanted was to welcome them and offer hospitality as we learned from them.”

For Peace Lutheran and the community, VCS was an exciting and inspiring way to learn about and accept others with different beliefs. It’s a vision Appell hopes will spread to other congregations across the country.

Amanda Straw
An alum of DePauw University, Amanda Straw is a freelance writer based in Chicago.

The art of coexistence