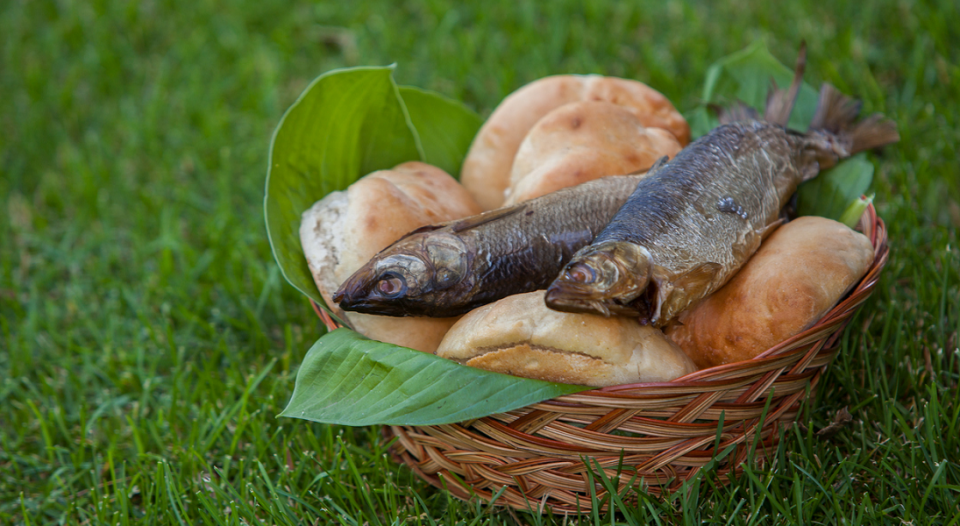 I have a close friend, an atheist, who helps keep my faith life honest and searching. A very Christ-like person in many ways, his questions are always rather pointed. I’m grateful. “Do you really believe these stories, Frank? Water into wine? A sea parting? Feeding thousands with so little? Come on,” he says. “The Bible is expecting a little much from anyone who has a brain.”

The interpretive history of the “Feeding of the 5,000” (John 6:1-14) often gets stuck explaining how it all happened. One popular angle suggests that families packed picnics. Recognizing the great distance around the Sea of Galilee, they stuffed a few sandwiches under their shirts. Overcome by Jesus’ generosity and his radical teachings, people brought out their food and, lo and behold, everyone was fed by the collective sharing.

I like this interpretation. Unfortunately, there isn’t a shred of evidence that these hungry people brought anything with them other than an open mind.

Then there’s the “Teeny Taste” hypothesis. A leader of a Lutheran youth assembly once asked 400 participants to pass around a medium-sized doughnut. The pastry made its way up one aisle and down another, exchanged by careful fingers and sweaty palms. (No one said miracles were hygienic.) The entire auditorium received a taste, a crumb, because no one was stingy and everybody was intrigued.

But this isn’t a story about a little taste. They ate “as much as they wanted” and filled 12 baskets afterward. The crowd didn’t nibble—they feasted.

Discovering such a story, we often try to explain how it all happened. But perhaps another question is in order: Why?

Why were these stories told in the early church? To what real end?

Jesus joins a wedding party and the wine runs out (John 2:3), and 180 gallons soon appear. After the crucifixion, the disciples fish all night. Zilch—not even a guppy. The next morning, Jesus appears on the beach. They follow his instructions, try the other side of the boat and haul in 153 large whoppers of every variety (John 21:11). Five thousand people sit on a grassy bank. They don’t just nibble on fish and chips. They are stuffed to the gills.

That’s 180 gallons of wine; 153 large fish; baskets and baskets of leftovers. Jesus brings abundance. He brings ferment, fullness and lavish plenty. The early church wasn’t interested in explaining how these miracles happened. They only knew that Jesus brought to their lives a measure of joy that wasn’t there before.

The early church had no other way to talk about this abundant life other than to tell the stories over and again whenever they gathered, remembering the man who brings abundance.

These stories won’t stand up to scientific scrutiny. “Do you really believe these tall tales?” my friend asks. “How can you swallow this stuff?” The stories aren’t intended for such questioning.

Life with Jesus is like a huge picnic where everybody is fed so full that you can only lean back on the grass and watch the clouds go by, gratefully.

Don’t try too hard to figure out how in the world Jesus possibly fed 5,000 people with a little boy’s little lunch. Look instead for signs of how Jesus is filling us—spiritually starved people who live in a land offering a diet of grand but often empty promises that never seem to satisfy.

We look to another to fill our thirsty souls.