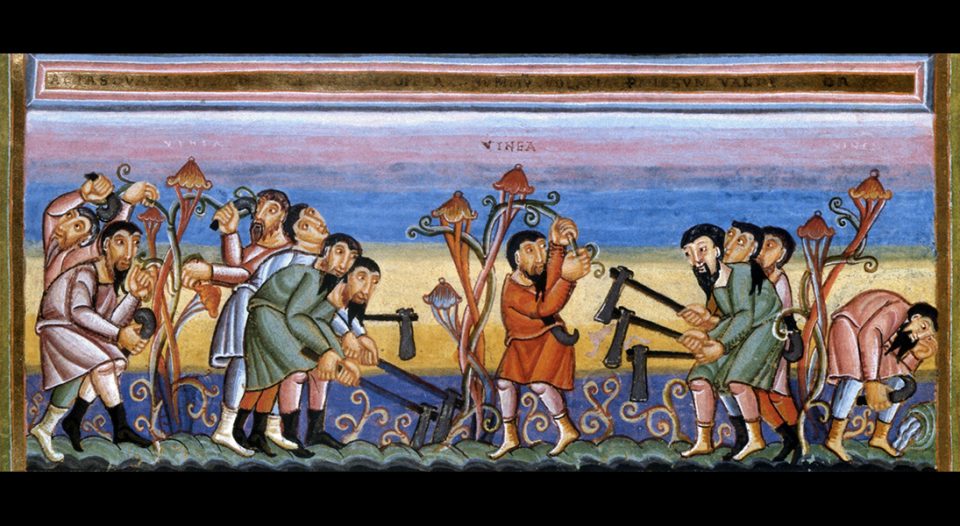 Whenever a text begins with words like “therefore” or “but” or “nevertheless” or, as in today’s Gospel, “for,” it’s important to look back and see what just happened. There we will usually find something the text is commenting on. Indeed, in Chapter 19, Jesus tells the rich, young ruler to give away all that he has for the kingdom. Peter overhears this and brags to Jesus, “Look, we gave up everything and followed you; what then will we have?” Jesus makes a theological pronouncement about the apostles sitting on the thrones of the 12 tribes and the first being last and the last being first. Then, seeing the uncomprehending looks on their faces, he tells them a story.

“For,” there was a man who owned a small vineyard. He needed some workers; so around dawn he went down to the corner where all the unemployed guys hang out. He talked to a few of them and hired them. As the day went by, the vineyard owner kept going back to town to hire more workers: at 9 a.m., at noon and at 3 in the afternoon. All he said was, “I’ll pay you what’s right.” Finally, at 5 p.m., with only an hour to go in the workday, the owner went back to town and hired still more workers, again saying “I’ll pay you what’s right.”

Since this is a story about God, and since we have an assumption that God is fair, we think, “Whoever worked all day will make the most, and the ones hired last will make the least.” When the ones who worked only an hour get a full day’s wage, there is jubilation in the camp. There is “joy, joy, joy, deep in their hearts.” They are shouting, “Glory, hallelujah! Christmas has come early this year!” Everybody is multiplying their hours in the vineyard against a day’s wage and coming up with some goodly sums. Then they start listening. “What, what did he say? That can’t be right. Everybody gets a day’s wage. But, but, we were out here all day, and these people were only out here an hour. This is not fair.” And the owner said, “Why isn’t it fair? I paid you what I said I would pay you.”

Now Jesus is not naïve; he knows this sort of thing wouldn’t work in the real world. No employer is really going to do that. Jesus is using the stark unfairness of the story to teach his disciples one basic truth—God’s generosity is not tied to any of our human notions of fairness or equity. The story was told in response to Peter’s question about what rewards the disciples would get for giving up everything and following Jesus. Underneath Peter’s question is the assumption that somehow those who serve the longest and serve well deserve more than those who serve short term and perform poorly.

Jesus is using the stark unfairness of the story to teach his disciples one basic truth—God’s generosity is not tied to any of our human notions of fairness or equity.

We think like that sometimes, don’t we? We say, “Well, if anybody’s in heaven, it’ll be Bill. What a genuinely good guy he was,” as if salvation had anything to do with human goodness.

Jesus tells us that God is both good and fair, but God is good and fair on God’s terms, not ours. Friend, I am doing you no wrong, did you not agree with me for the usual daily wage? Am I not allowed to do what I choose with what belongs to me?

We have an almost uncontrollable tendency to start figuring our own advantage in almost any situation. And the gospel is—God doesn’t calculate things the way we do. God figures our merits with a calculus of grace that is far beyond anything we can comprehend. All we can really know is that God’s love for us is overwhelming, generous and somewhat unbelievable.

Some years ago, I had a workman at my house to do some repairs. He knew I was a minister and, in the middle of pulling a pipe out of my wall, he stopped working, stood up and said, “Preacher, can I ask you a question?” I soon realized he was an active church person looking for a second opinion on a matter that had vexed his heart for quite some time. “This here feller Hitler, what killed all them Jews and all, if he was to have asked God for forgiveness right before he died, would he still have got to go to heaven? Would God really forgive him?”

Realizing I was on touchy ground, I hedged my bets a little bit. “Well, I have serious doubts as to whether Hitler ever felt remorse for anything other than failing to win the war, and I doubt that he ever thought that his program of exterminating the Jews was either wrong or evil, so I doubt Hitler asked God for forgiveness, but, if he had sincerely and earnestly repented of his sin, then yes, God would have forgiven him, and yes, he would still “get to go to heaven.”

He looked at me for a moment, then he threw his wrench on the floor, raised his hands up in exasperation and shouted, not at me but at the universe, “That’s not right! That’s not fair!”

I responded, “Well it may not be fair, but it is most certainly the gospel of Jesus Christ.”

The gospel is not fair to any of us, thank God. And our only possible response to the fact that God is “gracious and merciful, slow to anger, and abounding in steadfast love, and ready to relent from punishing” (Jonah 4:2) is to receive God’s love into our lives gratefully and to share it with others joyfully.

Lectionary: Waiting on the kingdom

Lectionary blog: What do we depend on?