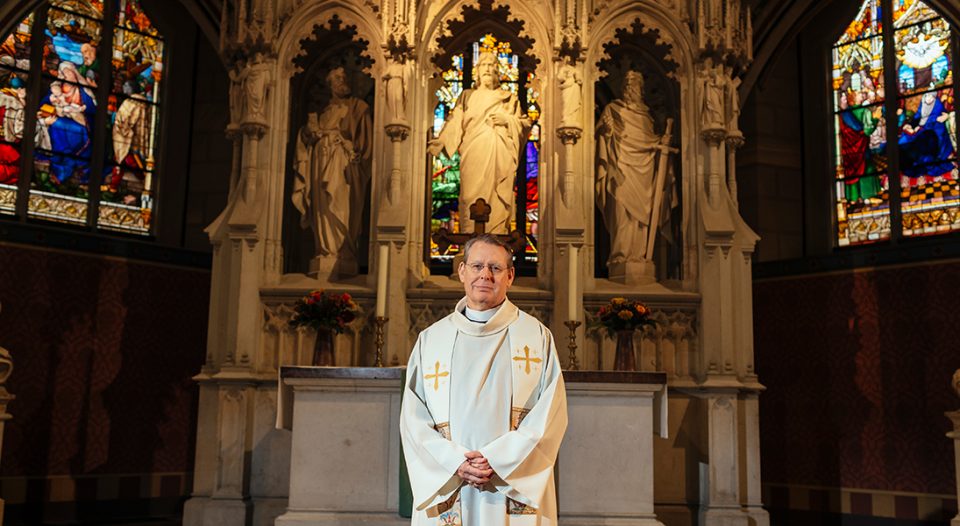 In 2016, the ELCA and the city of Leipzig, Germany, agreed that Leipzig would host an ELCA member who would represent both the ELCA and Leipzig during the 500th anniversary of the Reformation. The Rev. Dr. Robert Moore accepted the call after having served 23 years as pastor of Christ the King Lutheran in Houston. Along with his wife, Kathy, Moore has been working in both Leipzig and Wittenberg since July 2016 and will continue through June 2019.

The following is the second in a two-part series Q&A that offers a brief glimpse into Robert and Kathy’s work and their experience to date. Click here to read the first part of this Q&A. 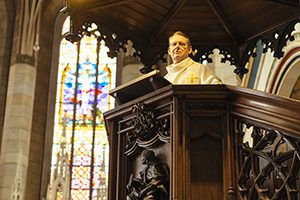 Rev. Moore Preaching in the Castle Church on Reformation Day 2016.

ELCA500: What type of public witness activities have you been a part of or will be a part of on behalf of the ELCA?

RM: We are invited to speak and share with numerous groups, families and individuals. Hardly a time goes by that we can’t share the faith as we in very human ways face the challenges of life. One example occurred this summer when I was invited to do a one-hour interview “live” on the regional radio station. As it turns out, I discovered that this weekly radio program has a huge following in Saxony, Thuringia and Saxony-Anhalt. As the questions were addressed to me one by one, the interviewer suddenly directed a question to me like an arrow. “Jesus is very important to you. Isn’t he?” Wow! What an opening. What an invitation. There is an advantage to being in the minority. Then, when someone asks what this Jesus man has to do with life, with meaning, with justice and with love, it is amazing.

ELCA500: How have you spiritually grown from this experience?

RM: I have grown in two major ways that have also presented challenges as I live the faith that I have preached and taught.

First, I came to this position like entering a dream-come-true. Kathy and I live in Germany, yes, Leipzig(!) and Wittenberg. But this meant a tremendous loss leaving Christ the King Lutheran Church after 23 years of ministry there. It has been challenging to discover who I am in such a different cultural context with new responsibilities. After one year I can say that I have discovered more of my true self, sustained by new colleagues. But, I also have a need to cling to my baptism and to understand from witnesses much greater than I about the daily walk in faith whereby the old self dies in order that the new self may rise in faith, hope and joy.

The other challenge, of course, is the language. We are in a constant state of learning and running up against new situations in which our language is inadequate, yet, still expanding. There is always a sense of learning, sometimes like a child and also of exploration of the new world that language opens up. Within that lies the realization that the language is important but not as important as identifying with the millions of immigrants and refugees who are thrust into new linguistic environments that can be not only intimidating but also threatening. 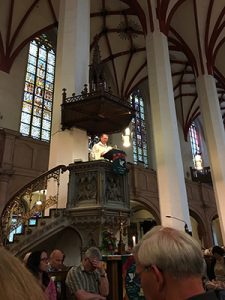 ELCA500: What from Martin Luther’s writings, speeches or sermons have you found yourself most drawn to in this experience?

RM: Most significant is Luther’s treatise on “The Freedom of a Christian.” This work summarizes the Christian faith and has become a classic Lutheran expression. In other words, it is a spiritual classic which helps readers interpret daily life and struggle through the lens of Jesus Christ. I am typically human, often turned in on myself, concerned about me, concerned about performance. This is Luther’s classic understanding of sin. Self-absorption instead of relationship with God, that is, trust in God to turn outward toward the world occupied by my wife, my friends, my neighbors. In this respect, I love Luther because he has helped me to understand the freedom that comes from hearing the gospel in word and sacrament and often set to music in the Lutheran tradition. To only recognize my imprisonment in my self is depressing, even despairing, but to be renewed through the gospel through baptismal life is the freedom that I enjoy.

ELCA500: What, in your experience, is the typical German philosophy about Martin Luther and his actions, particularly as it relates to the Reformation and the anniversary?

RM: Many Germans have lost contact with the spiritual roots of the Reformation, especially Luther.  They are aware of his importance in world history and especially German history. But after 40 years of official atheism in the Eastern states, the people have lost touch with the significance of Luther’s work for interpreting life, living in freedom and developing a culture of human value.

More and more I find a shared experience with Luther who, in his day, wanted to set free the church and the people from an achievement kind of religion that encouraged working one’s way into an ultimate destiny of salvation. In his case, Luther could turn his critical mind and his love for Jesus against the various exercises offered by the church for achieving one’s salvation. In the 21st century we may not go to confessional and offer satisfaction for our sins, visit collections of relics or offer alms for the poor to accumulate merit before God. But now we go to church to feel powerful whether to put someone in the White House, to ask God for help to be successful, or have the secrets to a happy and prosperous life. None of these things can put us in relationship to our Creator on an eye-to-eye level. The church offers the unique option of preaching the gospel of Jesus Christ, who embodies the presence of God in our broken world and shows that faith is not about building our way to God but recognizing that God has already made God’s way to us.

Tragically, Luther’s writings at the end of his life regarding the Jews has closed many to learning what Luther has to offer. I am pleased to be able to say publicly that my church, the ELCA, has repudiated Luther’s writings against the Jews. (See “Declaration of the ELCA to the Jewish Community.”) I continue to read Luther and am intent on turning his own writings against his later rants.

A Q&A with the Rev. Dr. Robert Moore, ELCA representative in Germany