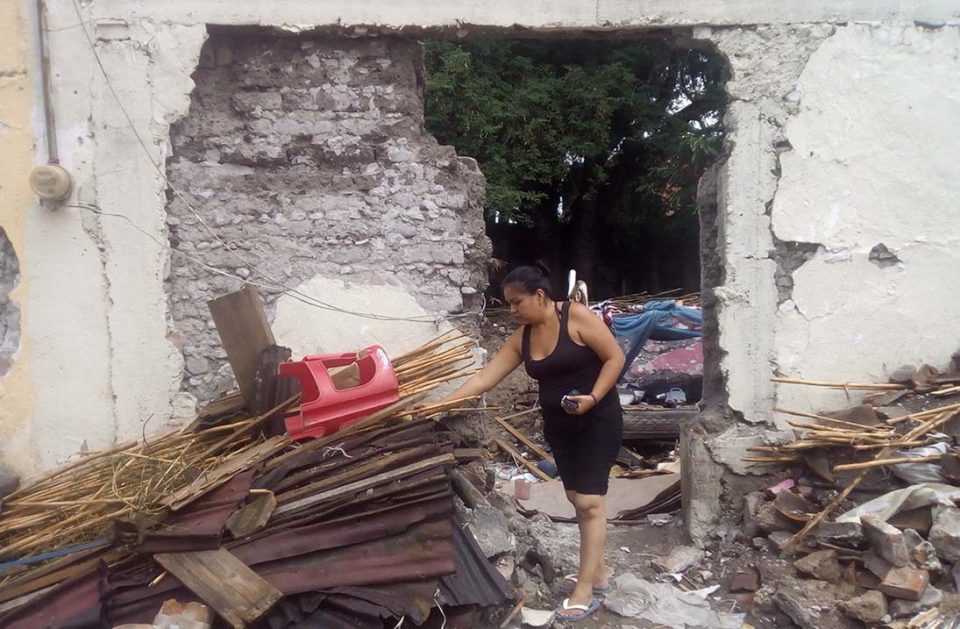 Carmen Morales stands alongside the rubble from her home and business caused by the recent earthquake in Mexico. Lutheran Disaster Response is working with its partner, AMEXTRA, to care for Morales and others who are without lodging after the quake.

Editor’s note: A series of earthquakes struck Mexico last month killing 167 people, injuring more than 2,600, and damaging some 20,000 buildings. Lutheran Disaster Response is partnering with AMEXTRA, a faith-based ELCA partner organization, to provide psycho-social support to people who were affected. Trained AMEXTRA volunteers will provide individual or group counseling to people in need. Here is one woman’s testimony after an earthquake destroyed her home and business.

To one side of the restaurant, El Portón de Carmelita, there is debris from what used to be the residence of the Morales family. Pieces of concrete, broken water pipes and wooden rafters are the remains of four generations of work. In front of this scene stands the restaurant’s owner, Carmen Morales, and machines that are removing waste from homes the 7.1 magnitude earthquake left behind in Jojutla, Morelos, in Mexico.

“The earthquake affected us all. I lost my source of work. My sisters and I work with the business here (pointing to her restaurant),” Morales says. “It [was] a fast-food restaurant and we have houses that we inherited—we are the fourth generation that [inherited] them—so right now my cousins, siblings and nephews are owners too,” Morales says.

On the other side of the street is her family. Women contemplate the disaster, while the men join in to help their neighbors save the few belongings that weren’t severely damaged in the earthquake.

At El Portón de Camelita, the Morales family sold pozole, tacos, tostadas, chilaquiles and other snacks and Mexican food. But after the earthquake, the restaurant was left damaged inside, leaving it unsalvageable, even when the outside didn’t seem that bad.

¨Really, it’s sad to see in a blink of the eye that nothing is there,” Morales says. “There were some pots full of food in the collapsed building, so many things, but we give thanks to the Lord that we are alive and with a better attitude to start again.”

‘I only have what I’m wearing’

Morales invites her relatives to talk with us. With genuine interest, her siblings and cousins come closer. They tell us that in these moments they stay in their family’s homes outside of Jojutla because they have lost their homes. However, they note that the most affected is Morales, who not only lost her business but also her home, which was by the restaurant.

¨Really, it’s sad to see in a blink of the eye that nothing is there.”—Carmen Morales

The men show their anger toward government help. They note that Civil Protection has approached them to do a necessary inspection of their property. ¨We put up the caution tape ourselves so that no one would get too close, in case it falls,” they say, because no one has come to help.

A little more optimistic, Morales mentions that on Sept. 20, the Mexican president visited Jojutla and passed by the affected area, and he promised federal aid for reconstruction of her home and those of her neighbors. However, he didn’t tell them when. According to Morales, he only stressed that Oaxaca and Chiapas would be prioritized while they evaluate the total damages in Morelos. The rest of her family is skeptical.

“I only have what I’m currently wearing,” says one of the Morales brothers upon being questioned about his belongings. The earthquake, he says didn’t give them time to save anything. Now they are just waiting to remove the debris and see if there is anything they can reuse.

Many of them were outside Jojutla the day of the earthquake, but Carmen Morales felt it and saw the family’s years of work and effort crumble to the ground.

Maybe this is the reason she is concentrating on the solution for the current situation, because she, of all the family, lost the most after the earthquake. Morales doesn´t complain, instead she says: ¨We need your help to survive. We don’t work for fun; we work for necessity. We don´t only ask for the Morales family but for all the people that need and depend on their business, their work.¨

The solidarity is present even among the victims. Morales asks for help—not only for herself and her family but also for her neighbors. Her sister cries upon reminding us of the death of a blind adolescent who couldn´t get out of the house to save himself, getting trapped in between the walls and the roof of what was his house. Her brothers stop talking—they know that they must be strong to support their sisters.

We say goodbye to Morales, and she blesses us and thanks us for spending time with her and her family, as well as our for interest in her case. As we walk away, she returns to her family and joins the line that had formed to see the other side of the street, in front of them is the ruins of what used to be her home.

To support Lutheran Disaster Response in Mexico, go to elca.org/ldr.