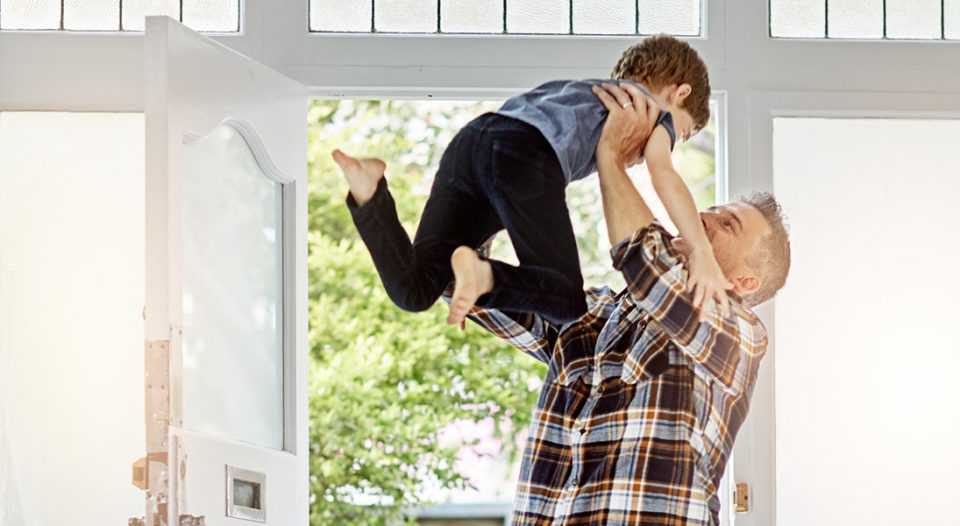 When I was maybe 3 or 4 years old, I was obsessed with touching the ceiling in the front hallway of my grandparents’ house. It was an old, rambling farmhouse filled with large, airy rooms and high ceilings. The front door opened off the porch into the hall. It was wide, with a slick wooden floor. There were doors along the hall into the “front parlor,” my grandparents’ bedroom, and the dining room and kitchen at the back of the house. I frequently laid down on that cool wooden floor, turned over flat on my back, put my hands behind my head, and stared up at the far-away ceiling.

It was, for me, an unreachable goal. I occasionally devised what I considered very clever methods for reaching it. I stacked up boxes and chairs, creating a precarious pyramid, a personal tower of Babel by which I could ascend to the stars—or at least to the ceiling. But, alas, I always failed in my quest. Either, with great howls of pain and anger, I would fall off my tower, or the tower would fall on me. Or grandpa would happen upon me and my contraption, scold me for my silliness, make me destroy my stairway to heaven before it destroyed me, and send me outside to do something constructive.

I will never forget the day I reached my goal, the first time I touched that ceiling. It was a beautiful summer afternoon. We went to church, then friends and relatives gathered at Grandpa’s for “Sunday dinner.” Some people were on the porch, drowsily talking about the preacher and the weather and the crops and the New York Yankees. Others were in the kitchen, washing dishes and putting away food, talking about the preacher, and what the preacher’s wife wore to church, and who died last week and such as that.

Most of the children were outside playing ball; I was on my back, staring upward, once again planning my assault. Daddy came into the hall from the porch, on his way to the kitchen for another cup of coffee. Suddenly, in an uncharacteristic burst of affectionate playfulness, he leaned down from his 6-foot-4 height and grabbed me up in his arms and settled me on his shoulders. As he spun around, I squealed with both delight and terror. Faster and faster he went, holding on to my ankles as I let go and leaned back, my face staring up at the twirling, swirling ceiling tiles. Suddenly, I realized I could just sit up and reach out my hand and I would have done it. I would have reached my goal, I would have touched the ceiling. And so—I did.

This is the 500th anniversary of the Reformation. Every Reformation Sunday is a time of joy and celebration for Lutherans. And to be honest, no matter how much we try to maintain our characteristically Lutheran humility, a bit of triumphalism and pride sneaks in. We were the first Protestants; we were the ones who re-discovered the real “truth” of the real gospel; we put the Roman church in its place. “A mighty fortress is our God,” and “we’re so glad we’re God’s fa-va-o-rites.”

Whatever it is we think we have accomplished, it would not have happened without those who came before us. We stand, as it were, on the shoulders of giants, giants who stood tall by having faith and trust in the promises of God.

When Martin Luther stood at the door in Wittenberg, when he stood before the emperor at Worms, he stood on the shoulders of giants.

Giants like the Psalmist, who sings a song of salvation, shouting to the heavens that God is a refuge and strength, a very present help in trouble.

Giants like Paul, who reminds us that our life in God is rooted in the fact that “we are justified by faith apart from works of law.”

Giants like John the Evangelist, who told us stories of Jesus so that we would know the truth about God’s love for us, a truth that would set us free to love one another.

Giants like Augustine and Thomas Aquinas and Hildegard of Bingen and Teresa of Avila and Julian of Norwich and Patrick of Ireland and Columba of Iona and Wycliffe of England and Hus of Moravia.

And now, 500 years later, we too stand on the shoulders of giants in faith as we reach out toward the future of always becoming the community and the people whom God made and called us to be. And we can reach for that uncertain and frightening future with full assurance that God in Christ will continue to gather us into his arms with affectionate playfulness, lifting us up, higher and higher, to levels of love and joy we can only begin to imagine.

Waiting at the door this Advent