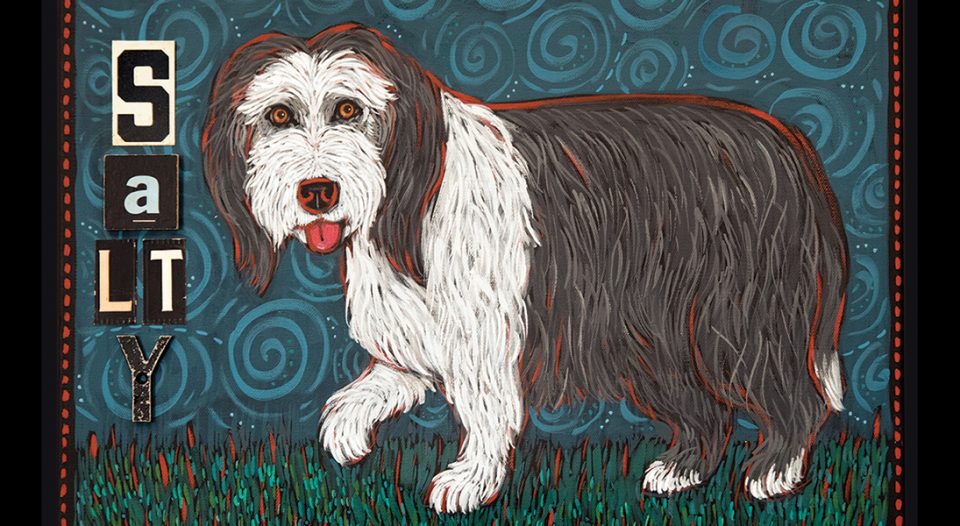 ELCA pastor Denise Gundersen was at a church meeting when a dog wandered into the room. She wondered aloud where it came from, and the host pastor replied, “He’s a church dog so he goes wherever he wants. Every church needs a dog.”

That advice stuck with Gundersen, who was still grieving the death of her 17-year-old dog. She soon began to search for her first church dog, a bearded collie she would name Salty Dog Gundersen who would spend 12 years alongside her in ministry.

This October many ELCA congregations will host pet blessings in conjunction with the feast day of Francis of Assisi, the patron saint of animals. These blessings are one of the few times four-legged creatures roam the building—unless a dedicated church dog is on the premises. What blessings can a holy hound bestow on its pastor and congregation? A look at the life and ministry of Salty, who passed away in June, offers insight.

Gundersen and her husband, Barton, adopted Salty at 5 months. “From the day he came home he was being trained to be a public minister,” she said. They named the certified therapy dog for that purpose as well, drawing inspiration from Matthew 5:13.

Right away Salty got involved in Gundersen’s call at Grace Evangelical Lutheran Church in East Tawas, Mich. He accompanied her to office hours and committee meetings and helped in “encouraging the choir” at weekly practices. He could also be found resting at the feet of then church secretary Cheryl Frank. She witnessed the dog’s gift for evangelism: “Salty really made everybody feel welcome. He was known throughout town as ‘the dog from Grace.’ ”

The dog made all the difference

Popular among the old and young, Salty was known to comfort crying children and play hide-and-seek with the confirmation kids. A frequent companion on visits to nursing homes and homebound members, he was so well loved that his absence was unacceptable to some. “If pastor went out to visit my [homebound] aunt, she would be very angry if she didn’t take Salty with her,” Frank said. “Pastor almost didn’t get in the door without him.”

Salty’s presence was a balm to many, even those who weren’t believers. Once Gundersen was asked to officiate a funeral for a woman who was married to an agnostic. Her son, a veterinarian, scheduled a meeting to plan the funeral. He and his siblings worried their father wouldn’t cooperate.

But he did. Before the meeting, “Salty walked over to him and he just stared into the dog’s eyes,” Gundersen said. “I looked over and his son, the veterinarian, was weeping. He patted the dog on the head and said, ‘Pastor, what do you need from me?’ ” From that point on the meeting went smoothly.

“After the funeral his son said to me, ‘It was the dog; it made all the difference,’ ” Gundersen said. “I couldn’t have done that—Salty did.”

When they first met, Laurie Rubier had experienced three deaths in her family in the span of three years, the most recent being her mother’s. “She was in deep, deep grief,” Gundersen said, and it was hard to reach her. Enter Salty. One morning while Rubier was weeping in the sanctuary, Salty joined her. “Laurie looked at the dog and started talking to him,” she said. “And out comes the whole story.”

Rubier said, “I know that sounds kind of crazy, but it felt like Salty was listening to me.”

Rubier ultimately credits Salty and Gundersen for helping her grieve. Gundersen counts this as one of Salty’s most astounding acts of ministry.

“I know that sounds kind of crazy, but it felt like Salty was listening to me.” — Laurie Rubier

Salty also followed Gundersen to Ohio to serve St. John (Champion) and Prince of Peace (Cortland). He retired from ministry in 2015.

It would be remiss not to mention the influence Salty had on Gundersen, who said working alongside him made her a more calm, assertive leader.

Eventually she will get another church dog. “I just can’t see any downside to having a dog in ministry,” she said. “A dog makes people feel safe. There’s a lot of people who would love to own a dog and just can’t for whatever reason. Having the dog at church is like their dog.”

Remembering and giving thanks for Salty, Gundersen said, “It was fun to bask in his glow.”

The church is always open