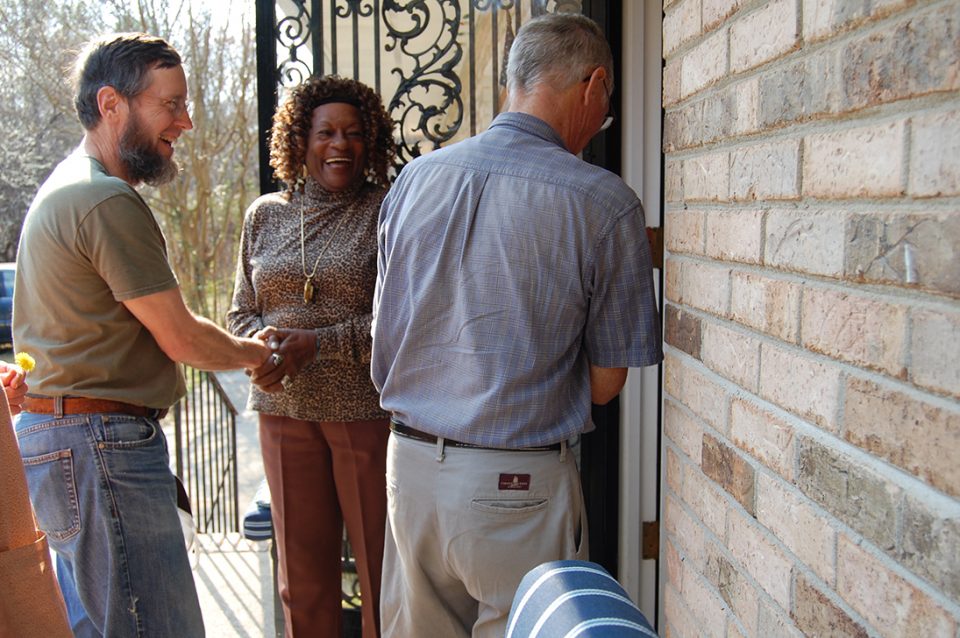 Dorothy Brown stands in front of her home, which was severely damaged by a hurricane and refurbished through Lutheran Services Carolinas.

Dorothy Brown has been through a lot in 89 years: the tragic death of her son, the loss of her beloved husband and more storms and bad weather than she could ever begin to count.

But when Hurricane Joaquin arrived at her door nearly two years ago, there was something different. “I prayed,” she said. “The rain, it just wouldn’t stop.”

And throughout the weekend of October 1, 2015, she watched as the waters seeped slowly through the weeds and grass, inching closer and closer to her home.

When it was over, both Brown and her home had survived. Yet as time passed, it became more and more obvious that considerable damage had been done to her home.

The little yellow house had been theirs since 1974, and her husband had always kept it in immaculate shape, permanently installing it and surrounding it with a brick façade so that few knew it was, in fact, a mobile home. But as the months after Joaquin passed, the roof over part of the house collapsed, the floors began to shift, and the bathroom floor seemed spongy.

It was nearly a year after Joaquin that Lavada Smith, a disaster case manager with Lutheran Services Carolinas (LSC), came into her life, bringing with her hundreds of volunteers from all over the country–just a few at a time.

According to Smith, because of the mold and concerns that the bathroom floor was moments from collapse, repairs to Brown’s home became a priority. LSC was able to use funding from FEMA, the Red Cross and discretionary dollars from the ELCA South Carolina Synod to get the work done.

Brown quickly began packing for a trip to New York where she stayed with her daughter while volunteers from Brethren Disaster Ministries (BDM) and others began stabilizing her home. She remained there until New Year’s Day when she came back to participate in the rest of the renovations.

The repairs at the Brown home were led by Kim Gingerich, long-term project leader for BDM. “She is such a grateful and joyful person,” Gingerich said of Brown. “It was an honor to be able to serve her.”

The people who worked on her home were from all over the country­–Ohio, California, Virginia–and  from many denominations: Church of the Brethren, United Church of Christ, Roman Catholic, Lutheran, and more. Brown was moved to tears when about 20 of those volunteers joined her for worship at her church, Zion Chapel Baptist, the Sunday before the project was completed.

About 40 volunteers and family joined with Brown at a homecoming and blessing last February to celebrate the restoration of her home. In a moving dedication ceremony marking the end of their time with her, volunteers presented Brown with a beautiful quilt, handmade by Church of the Brethren members.

“I am just so thankful. I couldn’t have made it without them. Now I have friends and my Lord.”