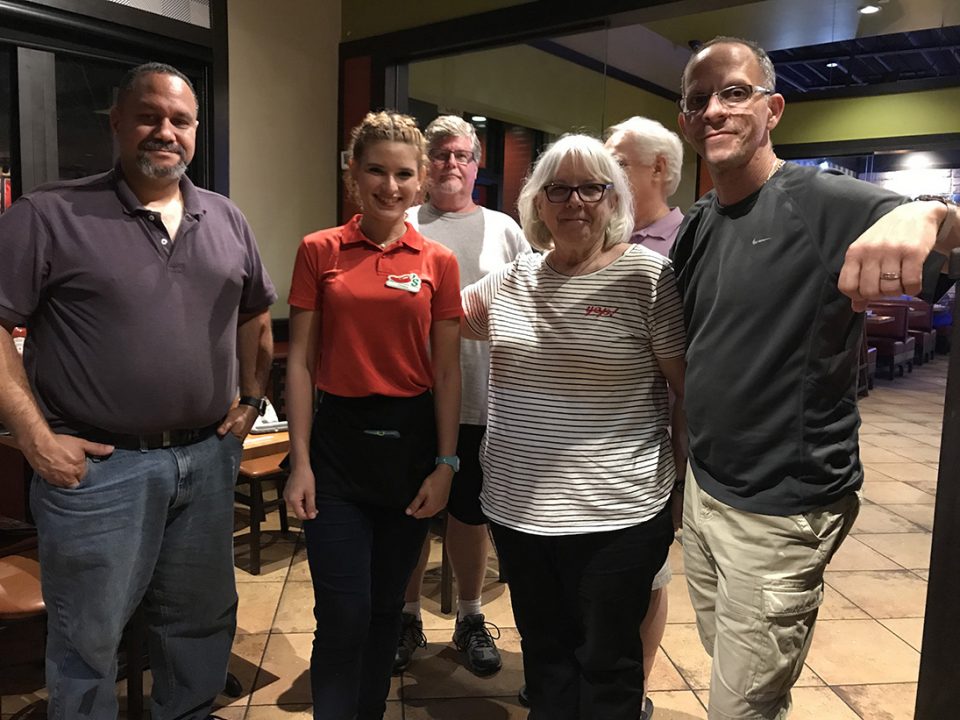 The author (left) with Diana (center, in red) with parishioners.

“I am doing OK. … I lost everything, but I am getting back on my feet. Other people have not been able to do that—help them.”

These were the words of a young woman from Puerto Rico we met during my congregation’s mission trip to the hurricane battered island in the first week of November. Her name is Diana, and she lives in Toa Baja.

Toa Baja was hit hard during Hurricane Maria. Diana’s house was flooded by the raging waters of the River La Plata. Everything there was damaged or lost—her computer, books, clothing, furniture, bed, family pictures and other personal items.

I met Diana while she was serving our group a meal. Since there weren’t many people at the restaurant, our group had time to bond with her and listen to her story. Diana showed us a video on her phone that captured the raging and destructive waters that flooded her house and the town of Toa Baja. We heard her cry of desperation as she and her family left by car to escape the rising waters. A week later when Diana’s family was able to return home, she learned that a family of eight had drowned nearby.

Despite all this, Diana’s faith seemed unaffected. At the end of our meal, when were about to leave the restaurant, I blessed her. Diana responded with a loud and confident, “Amen,” then blessed us back as we exited the restaurant.

In that moment, we’d been given a gift—the faith and hope of someone who had lost much, but whose faith was not extinguished. As someone who was born and raised in Puerto Rico, I was moved to tears.

The day prior my congregational group visited Iglesia Luterana San Pedro (St. Peter’s Lutheran Church) in Toa Baja and saw the water marks inside the church building. Their hymnals were damaged; their pews were knocked down and splattered with mud. Members of San Pedro had cleaned the worship area, but there was still more work to be done inside the building.

In that moment, we’d been given a gift—the faith and hope of someone who had lost much, but whose faith was not extinguished.

And yet everyone we met had an astonishing sense of gratitude.

Diana and Iglesia Luterana San Pedro share a common story—they were both affected by a natural disaster and suffered great material loss. Nevertheless, they also share a hope in God.

Both Diana and the people of Iglesia Luterana San Pedro know in their hearts that God will never ever abandon them. Maria was strong, but God is even stronger.

The events that have made their destinies intertwined compels most to despair. But they have resisted hopelessness.

Is it hard? Absolutely—they told us that much.

Will the devastation brought by the hurricane undermine their faith and hope in God’s future? No.

The members of my congregation who accompanied me on this mission trip are fellow witnesses of the hope and faith of the people of Puerto Rico, and of the Lutheran congregations who worship in challenging conditions without electricity and water.

For that, and for everything else God is doing around the world, I say, “Amen!”

Perspective: A God who loves beyond measure