In State College, Pa., Martin Luther’s message of grace for all resonated in a two-part program hosted by Grace Lutheran Church in April 2017. As a 500th anniversary of the Reformation grant recipient, the congregation hosted more than 350 people for “Faith Proclaimed through Song: 500 Years of Reformation, Renewal and Reconciliation.”

Led by Laurel Sanders, director of music ministries, the event incorporated the mainline denominations in a program centered on forms of music that contributed to or influenced the collective liturgies. The concert part of the program featured amateur performers backed by professional musicians in areas where needed. Several Lutheran brass chorales, two Lutheran 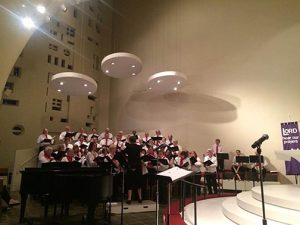 cantatas and a hymnody were the major musical presentations.

The educational part of the program hosted guest speakers from the Penn State University School of Music and United Lutheran Seminary to share the thinking and theology inherent in the various forms and types of music. These sessions underscored how each denomination contributed to the music from which all have benefitted.

“This music enabled participants and listeners to hear, grasp and internalize vital facets of their faith,” said Sanders. “A session that focused on some of the great chorales provided valuable information about the marriage in the Lutheran tradition between the Word and music, providing useful information to people with an extensive musical background as well as to those with very little or no background.”

Post-event evaluations expressed an appreciation for the varied denominational contributions to collective worship.

“I learned how the same ideas find expression in diverse worship,” said one respondent. While comments also included: “This event made me more aware of Christ” and “These ecumenical choirs mean a lot to me – I love singing in a choir, and my home church doesn’t have one. I really appreciated being a part of this, digging into music I otherwise wouldn’t know anything about.”

For many, it was an opportunity to establish new friendships within and beyond their own denominations.

“This was a model for what a Reformation celebration should be – ecumenical, informative and enjoyable,” said Dr. Mark Oldenburg, dean of the chapel and Steck-Miller Professor of the Art of Worship at United Lutheran Seminary.

The relationship building benefits blossomed within six months for the recreation of Luther’s Divine Service, in partnership with leadership from a Penn State faculty member and the Penn State Glee Club.

With their grant programs closed, Grace Lutheran and their new friends look to the next 500 years of Reformation for a greater sense of community.

“As we explore current and future ecumenical programs – and even projects designed primarily for our own members – we have a growing number of people who we recognize as valuable resources that can help us to build bridges within and beyond our own community of faith,” Sanders said.  “We drew people from many churches to this event and will continue to reach out to diverse and non-traditional audiences as well as within our own community, trying to share God’s message of love to all people.”