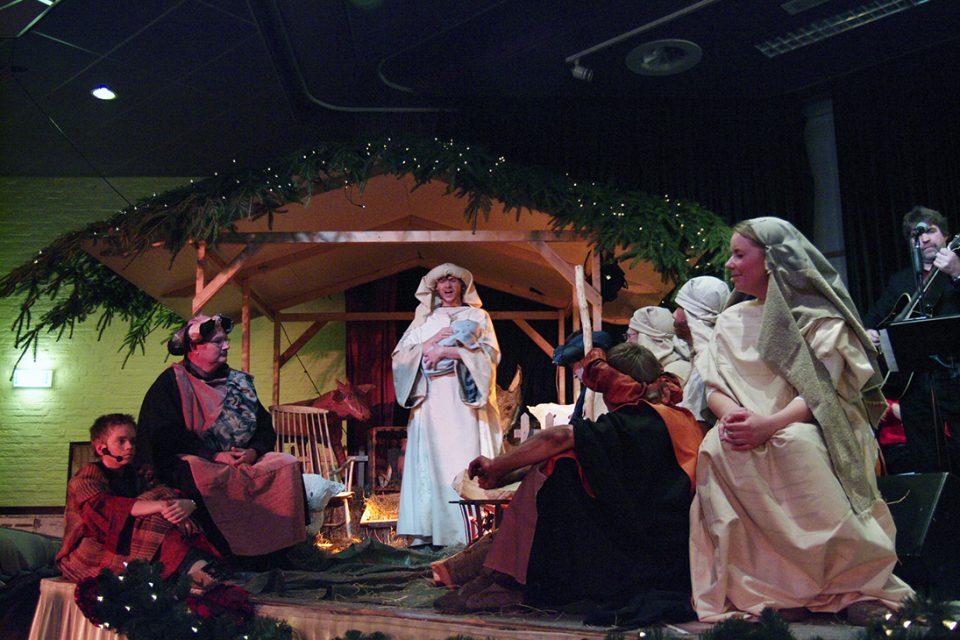 Editor’s note: The following collection of stories is a response to a reader call for funny Christmas pageant bloopers. This is a companion to the article “Pillow fights, wild hogs and more,” which appeared in the December 2017 issue of Living Lutheran.

A little girl who played the part of the Bethlehem innkeeper went off script and announced to Joseph and Mary and a stunned audience that there was room for them after all. – Carolyn Biedermann

My favorite is when all the little angels were standing around baby Jesus in his bed. All of a sudden they started fighting over who would hold him, pulling him and tugging at him. It was quite a sight to see these little angelic children in a brawl over baby Jesus. I was laughing so hard I had tears coming down my face! — Becky Voges

My parents owned a small motel in Madison, Wis., in the 1960s and ’70s. It came to pass that every Christmas pageant that I was in I was picked to be the innkeeper. I had the line, “I’m sorry, there’s no room in the inn” down really well! — Barry Hoerz

In December of 1972 I began my pastoral ministry at St. John’s Lutheran Church, a few blocks down the hill from Augustana College in Rock Island, Ill. Some years after I arrived, it was gently suggested to me that I see to it that the old and beloved Christmas pageant be resurrected and preserved after its previously being absent for “too long.”

Fast forward and the much-anticipated day of the pageant. The church was full and noisy with even Aunt Flo and Uncle Joe present. The child-actors were less cute and more like focused young pros. All that was hoped for was being realized!

But then …  spoken lines were missed. The angels appeared to be frankly un-angelic. Nothing was going as planned. The sound man (that’s me) clearly forgot to do whatever he was supposed to do. Before long it was utter chaos. Nothing, in my mind, was going as it was supposed to be. Nothing. The audience was clearly bewildered as to what was happening.

The pastor (still me—at least for a while) was supposed to conclude this Christmas Pageant with the benediction. I wasn’t certain that I could remember the words. Someone had the presence to call out, “There will be cookies in the fellowship hall!” Everyone left.

Strangely, the sounds I heard from the fellowship hall were not gloom and doom; rather they were lively and spirited, unmistakably joyful! What was going on? When I did encounter parishioners or fellow staff members they almost all spoke with glowing enthusiasm about how wonderful the Christmas Pageant had been. “Clearly, the best ever” was a frequent comment. — Roger L. Dahlin

My brother (Keith) was about 4 years old and in the first-year class. Since Christmas 1947 was his first pageant, he was assigned the “welcoming” piece. However, he had been very sick, and he was not expected to attend. He did attend, but the pastor did not see him and did not call on him. At the end of the program, the pastor made some general comments and asked if anyone had anything to add. My brother got his attention and said that he had not given his piece. Pastor invited him forward, my brother gave his “welcoming” piece, then we all went home. — David Voigts

This year’s Christmas pageant was a diorama set with doors opening and closing to display each scene. The scene was set: Mary and Joseph in the stable with baby Jesus lying in the manger. (Mary and Joseph were 10-year-old twins.) The doors were about to open when I suddenly noticed Joseph squeezing Mary’s hand and Mary preparing to slug Joseph. Luckily I was able to diffuse the situation just in time, and the show went on with the congregation none the wiser. — Sue Apple

After more than 25 years of teaching Sunday school, vacation Bible school and directing the children’s Christmas pageant at a little country church in the hills of southwestern Wisconsin, I’m now 85 and long-gone from those days and from our little church, but I am blessed with the memories and the smiles.

I had fun awhile back combining a few of the things I’d seen in working with dozens of Christmas programs in a poem (this is an excerpt of a longer piece):

First come the angels two by two,  several with halos knocked askew. They scuffle ’til each finds her stance. When they sing, one angel starts to dance.

Next comes Joseph assisting Mary. He jerks her along so fast, how dare he? She pulls back; it’s a tug of war no pageant’s ever shown before. — Pat Leonard

Oh yes! Angels who decide they really don’t want to be in the play—and announce it; one little one who became entranced by the candles—and decided to count them over and over; a wise man (teenager) who showed up at the live nativity with an electric blanket and a very long cord, and the year we had a camel (stuffed) because that’s what the prop shop at the circus had to offer!  — Patt Kauffman

Tommy wouldn’t sit still in Sunday school. He was “a corker.” The Christmas program was coming, and the teachers had a great idea: the children would be animals, as in “The Friendly Beasts.” They’d wear their footed pajamas and “give gifts” to baby Jesus.

The kids were enthusiastic: “I’ll be a bluebird,” volunteered one. “I want to be a goat,” said another. Tommy yelled, “I’ll be the monkey,” as he pranced around.

Tommy missed rehearsal. “Oh, no,” worried the teachers, “Tommy might say anything.” When program time came, the teachers smiled; Tommy was still missing. They could relax.

At the last minute, in galloped Tommy. “You must be quiet,” whispered the teachers as they attached his tail and ears. “OK,” Tommy said.

The children sat on the steps in front of the altar and took turns at the microphone. Little bluebird began, “I will sing to baby Jesus.”

The goat said she would give cheese to the holy family. The horse offered rides, and the duck, feathers. Finally, the rabbit declared he’d share his soft fur.

Tommy grinned, somersaulted down the steps, leapt up, and shouted, “I will teach baby Jesus to laugh!” The congregation clapped and laughed. Jesus may have laughed, too. — Beth Hunnicutt