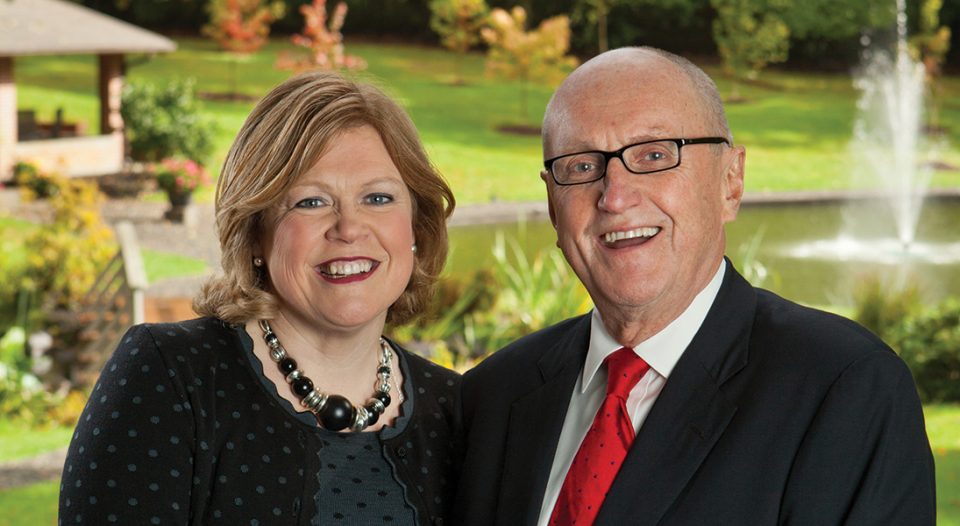 MaryAnn and Loren Anderson, co-chairs of Always Being Made New: The Campaign for the ELCA steering committee.

MaryAnn and Loren Anderson believe “there isn’t anyone who doesn’t want a church vibrant, alive, synergistic and abundant for their children and grandchildren to be a part of.” That’s one reason why the lifelong Lutherans and members of Mount Olivet Lutheran, Minneapolis, have dedicated their lives in service to the church.

MaryAnn, an executive coach and facilitator, has worked in philanthropy for several Lutheran institutions and serves as a leader in a number of philanthropic organizations. Loren, now co-director of the Thrivent Fellows program, an executive search consultant and managing partner of JDL Farms, was president of Pacific Lutheran University, Tacoma, Wash., from 1992 to 2012. Together they co-chair the steering committee of Always Being Made New: The Campaign for the ELCA, now entering its fifth and final year.

Living Lutheran caught up with the couple for their insights on this work and what lies ahead.

Living Lutheran: How did you get involved in The Campaign for the ELCA?

Loren: The way most of us get involved is that we’re asked!

MaryAnn: That’s a really key point in this. Bishop Emeritus Mark S. Hanson came to us and asked. … We said “yes” because we were asked and, secondly, because we have a deep commitment to and gratitude for this church in our life and the life of our family going forward.

MaryAnn: I think that’s at the heart of this [campaign]—what we can do together. We can do so much more as a church together.

What has surprised you most about working on this campaign?

Loren: In some ways … when I think about it, not much has surprised us, partially because back in the ’80s we were deeply involved in the last national campaign for the [American Lutheran Church, a predecessor of the ELCA]. … We’d seen the great stories that have come out of it—incredible stories of the commitment of faith.

I think that’s at the heart of this [campaign]—what we can do together. We can do so much more as a church together. — MaryAnn Anderson

MaryAnn:  That’s the miraculous gift of this campaign—people coming together in new ways. … The other thing that we’re cognizant of is that we’re planting seeds for the next hundred years. The work of this campaign will not be over when the artificial construct says this will conclude. It’s the beginning of what we can do together … for the sake of God’s world.

Loren: And who knew that we were going to have this terrible season of storms and hurricanes—and that the people of this church would step up and contribute $13 million over a couple months? … That’s part of the stewardship story of our church. The people of our church have just incredible capacity, and when a need is presented [they] respond.

What is the focus as the ELCA enters the last year of this campaign?

Loren: The Campaign for the ELCA is about building leaders, strengthening congregations and being a church with a global vision. The last period of this campaign is focused on those initiatives around leadership development. It really is the future.

MaryAnn: Leadership is a thread that runs through all components of the campaign. In some ways we get to save the best for last and hold that up because it ties together all the ministries.

Loren: We’ve doubled the involvement of Young Adults in Global Mission, we’ve brought great resources to the table for the Fund for Leaders, we’re working on the International Women Leaders Scholarship program. All of those ministries are about equipping leadership for the future. … That’s the church we’re building for tomorrow on the basis of what we’re called to do in this campaign today.

What would you say to someone who hasn’t yet participated in the campaign?

MaryAnn: Join us! Let’s see what we can do together.

Loren: We as Lutherans believe that we’re saved by grace and called into service (vocation). This vocational piece is all about how I’m going to live out my life in a way that contributes to the world and gives back.

[Thousands] of people have responded [to the campaign]—that’s incredible. … On behalf of your steering committee, I say thank you to all of you who have contributed, and I challenge you to do, as MaryAnn and I have done, to review where you stand today and consider doing a bit more as we push toward the goal—and then invite your neighbors to join you!

How has the campaign made an impact thus far?

Loren:  I’m always struck by, ultimately, a campaign and the people who become involved—the No. 1 impact is on the donors.

MaryAnn: [Giving] is personally transformative because you understand community in new ways, and understand the power of leadership in new ways. … We have watched staff transform, and we ourselves have been transformed.

Loren: The second impact [of a campaign] is on what the donors’ resources help the organization do.

MaryAnn: These leadership initiatives certainly impact young leadership, and that young leadership directly impacts us. I’ve watched these international women leaders have the phenomenal opportunity to study at ELCA colleges and universities, and these women are changing the campuses of which they’re part of the community.

They impact their fellow students, and all of a sudden our vision of the world is broader because of their presence among us. It’s an incredible story, and [the ELCA] will be changed because of that.

How you can help

Approved in August 2013 by voting members of the ELCA Churchwide Assembly, Always Being Made New: The Campaign for the ELCA was officially launched Feb. 1, 2014. As the ELCA enters its final year of this fundraising effort, Ron Glusenkamp, an ELCA pastor and campaign director, said he is grateful to all members and congregations who have contributed to life-changing ministries. He invites everyone to make a new year’s “resolution to be part of the solution” so this church can do more together.

Getting involved is easy, Glusenkamp said: “Select a ministry where you want to invest. You can give online, via check or by phone. Your gifts and prayers for congregations, hunger, global church and leadership make a big impact in the world.”

To learn more or make a gift to the ELCA’s five-year $198 million campaign, click here.