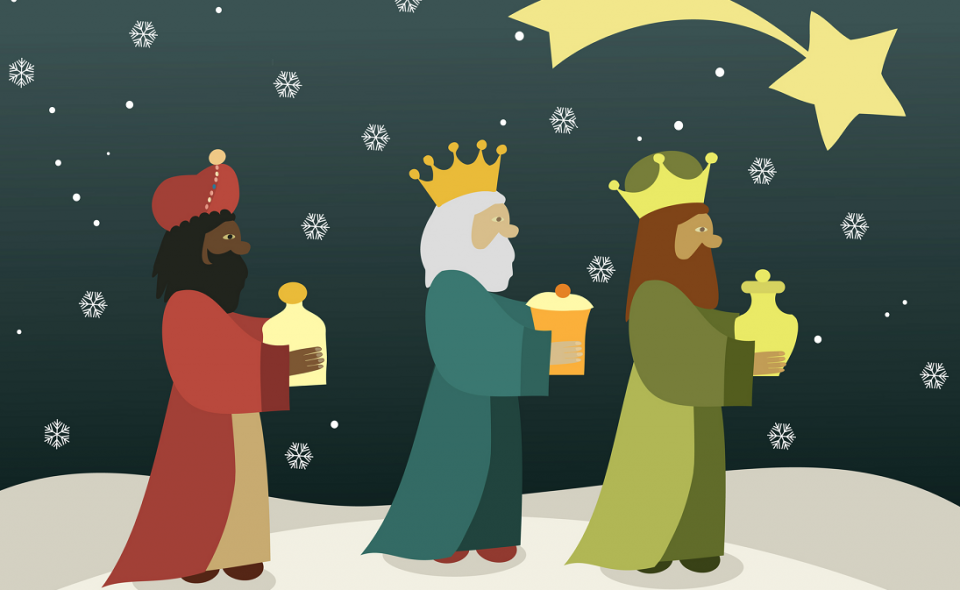 Once upon a time, several guys, perhaps early astronomers who frequently gazed at the night sky, embarked upon a long journey. They were data-gatherers, probing beyond the obvious for signs in the stars, clouds and wind, hauling around notebooks filled with precipitation projections and constellation movements. They probably matriculated at the finest universities this side of Persia.

Tradition suggests three followed the famous star. The Venerable Bede (672-735) even supplies their names in one of his history books. The Bible offers neither name nor number. We’ve assumed three magi from the gifts they bring. Could have been more than three or less.

Let’s assume three well-educated guys set out. And they presumably begin the trip with no map to guide them, just a star. I suppose many might say, “Well, that’s just like a man. Right here in Scripture is evidence of the primordial male refusal to bother with directions.” But these guys were pros. They followed a very cooperative star that moved around a lot and seemed to have a mind of its own, stopping at just the right place.

And you can be skeptical about such astronomical assistance, but one of the things I love about the Bible is how the entire cosmos stands at God’s beck and call as supporting cast, actively participating in the divine song of redemption. To an outsider in much of North America, Christianity might be perceived as an indoor, climate-controlled religion. But so much of the Bible’s story is told outdoors. “If these [disciples] were silent,” Jesus once said famously, “the stones would shout out” (Luke 19:40). The star’s appearance is only a single instance of an “ecological Hallelujah chorus” throughout Scripture.

And you can be skeptical about such astronomical assistance, but one of the things I love about the Bible is how the entire cosmos stands at God’s beck and call as supporting cast, actively participating in the divine song of redemption.

The travelers eventually arrive in Jerusalem. “Where is the child who has been born king of the Jews?” The word “where” in this verse is the first out of the mouth of any human being in Matthew’s Gospel (2:2). Where is the king? When I use the word “where,” it’s usually in the context of a rather mundane hunt. Where are my car keys? These magi are about a more serious search.

Led again by the star, they hike 9 miles up the road to Bethlehem, kneel and leave gifts for the child. Notice that the magi are relatively late in coming to Jesus. We don’t know how late, but you should certainly mistrust any mantle manger scene that includes wise men alongside the shepherds. This old Epiphany story doesn’t date Jesus’ age, but the holy family has moved into a house (Matthew 2:11)—apparently better digs. Jesus may be several months old, even a year or more.

Evelyn Waugh (the late British novelist) referred to the magi as “patron saints of latecomers.” The church has entered an era where many children in our country have had little or no exposure to Christianity. Others depart in adolescence and may return to church later in life. We will see (are seeing) lots of “latecomers” to Jesus. How shall the church joyfully and faithfully welcome them?

The last verse of the story reports: “And having been warned in a dream not to return to Herod, they left for their own country by another road” (Matthew 2:12). Such a decision must have been more difficult than it sounds. We know from the subsequent child massacre (Matthew 2:16) that Herod was a rather maniacal king. Taking another road was risky. Following Jesus always is.

The Bible doesn’t mention the magi again or how exactly their encounter with Jesus changed them. The story, as it closes, is delightfully open-ended, leaving room for us to ponder how Jesus’ life will disrupt and enrich our lives in the new year.

We can take theological cues from the magi and their serious overland search. The very first words out of Jesus’ mouth in another Gospel also suggest a thoughtful inquiry: “What are you looking for” (John 1:38)? His question implies an answer with more delightful depth than a search for my lost car keys.