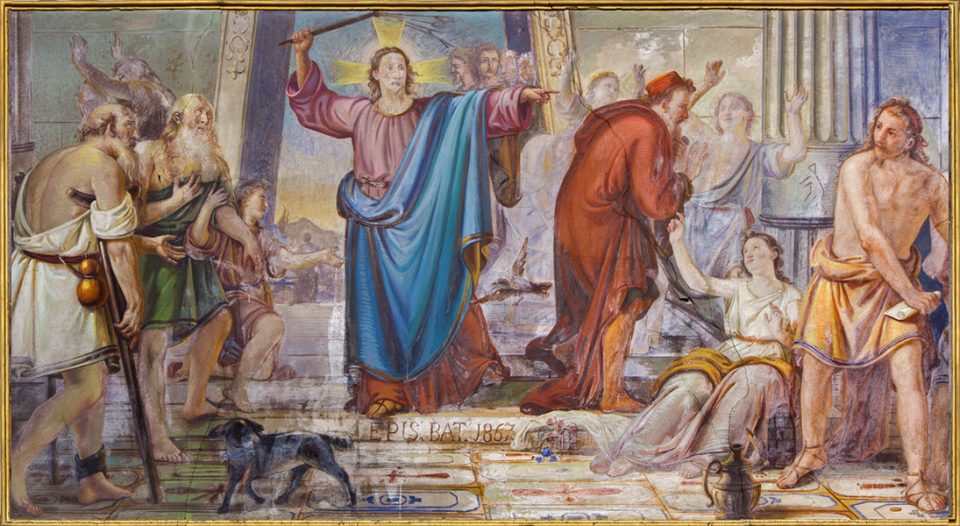 One Saturday after breakfast, Mama announced it was our family’s turn to clean the church. We were not a liturgical people; our auditorium was as plain as plain could be. The only decorations were a hymn board and a large, framed “church covenant” on the wall. For me and the other children, the “pulpit area”—with its large wooden pulpit, sturdy table with “In Remembrance” carved across the front, and three bulky chairs (for the Father, Son and Holy Ghost, I thought)—was forbidden territory, a “no-go zone,” as sacrosanct and inviolable as a graveyard. I was both terrified and mystified when my mother led us into that area and opened a door on the back of the pulpit and removed … furniture polish and dusting rags. I peeked inside and discovered that that was not all it held. There were burned-out light bulbs, backless Bibles, worn and tattered hymnals and several years’ worth of outdated Sunday school material.

When Jesus went to the temple he saw many things. “In the temple he found people selling cattle, sheep, and doves, and the money changers seated at their tables” (John 2:14). New Testament scholar Scott Black Johnston says, “Jesus is passing through the outer courtyard of the temple when he comes upon merchants selling animals and changing coins. Both pursuits were necessary to the daily functioning of the temple. Animal vendors sold the various creatures that were to be sacrificed. Money changers enabled worshipers to change some of their everyday money into Jewish currency to pay the half-shekel temple tax” (The Lectionary Commentary, The Third Readings: The Gospels, p. 492). So, if the behavior of the buyers and the sellers is both normal and necessary, what is Jesus so upset about?

On the one hand, there is a fairly simple and pragmatic answer. The last line of the prophet Zechariah promises that on the day of the Lord, “there shall no longer be a trader in the house of the Lord of hosts on that day” (Zechariah 14:21). Jesus was a student of the Scriptures; it is quite likely that Jesus had long believed that moving the cattle merchants and money changers from their traditional locations in the Kidron Valley and on the slopes of the Mount of Olives to inside the temple grounds was an improper and disrespectful choice on the part of the temple leadership—a choice that reeked of opportunism and crass commercialization

On the other hand, Jesus had a related, yet more complex and theological, objection. By allowing the merchants into the temple precincts, those in charge of the only formal religious institution in Judaism had shown that they were more interested in maintaining that institution than they were in the purpose for which the institution had been founded. As Jesus said elsewhere, “You cannot serve both God and wealth” (Matthew 6:24, Luke 16:13). All the way back to the tabernacle tent that the Israelites carried with them throughout their 40 years of exile, the temple was meant to be a sign to God’s people of the constant presence of the Holy One in their midst. Like the sabbath, the temple was made for humanity, not humanity for serving the temple. But instead, the temple had become a going concern, a place where much money changed hands and huge profits were made for the religious leaders. They took advantage of the people’s desire to serve God.

Over and over again, we humans turn gifts into duties and opportunities into obligations. Our lesson from Exodus tells us about the giving of the Ten Commandments—which most people think of as the things God “requires of us” so that we can count ourselves as good people and get to go to heaven. But notice that the story begins with God saving the people, “I am the Lord your God, who brought you out of the land of Egypt, out of the house of slavery.” It is only after they have been rescued that God gives them the gift of the Torah, the guidelines for living in relationship with the Holy One and with each other.

But eventually two things happen. The people find the rules hard to obey, and they assume that obeying the rules is the point. “If only I can keep the rules,” they think, “then God will love me, and all my hopes and dreams and plans will work out.” Repeatedly, people get the cart before the horse, thinking they must do something, preferably something difficult and distasteful and against their own desires, in order to please God.

But eventually two things happen. The people find the rules hard to obey, and they assume that obeying the rules is the point.

This is why Jesus got so angry; the cattle pens and money-changers tables are both literally and figuratively getting between God and God’s people. He made a whip of cords and drove the cattle out of the temple. Note carefully the wording of the text, he did not flog anybody, he drove out the cattle: “he drove all of them out of the temple, both the sheep and the cattle.” This is not an example of Jesus using violence on people, nor is it an example of his being so human that he not only lost his temper, he also lost control. He did turn over the money changers tables and scatter their wares, but nowhere does it say he harmed another human being. Jesus wanted to make a powerful public statement, a demonstration of the fact that the temple was God’s house, God’s gift, a place for God’s people to come together in the presence of the Divine and that nothing should be allowed to get in the way of that.

For John, the reason Jesus came into our midst is to remove any doubt that our God is a God who acts before we can act, who saves us before we even know that we are in need of rescue, who will stop at nothing, not even death, to wipe away everything that stands between us and the love of the Holy One who made us. The references to the Passover, and to rebuilding the temple in three days, and to his body itself being the temple of the Lord, all point to Jesus being the Christ, the one Paul says is “the power of God and the wisdom of God.” We are invited this day to drive out of our lives anything that gets in the way of God getting to us. We are invited to remember that God loved us and saved us long before we were aware of God or capable of doing things to earn divine favor. We are invited, as the body of Christ in the world, to be a true temple, allowing God to dwell in us and serve the needs of others through us, in Jesus’ name.