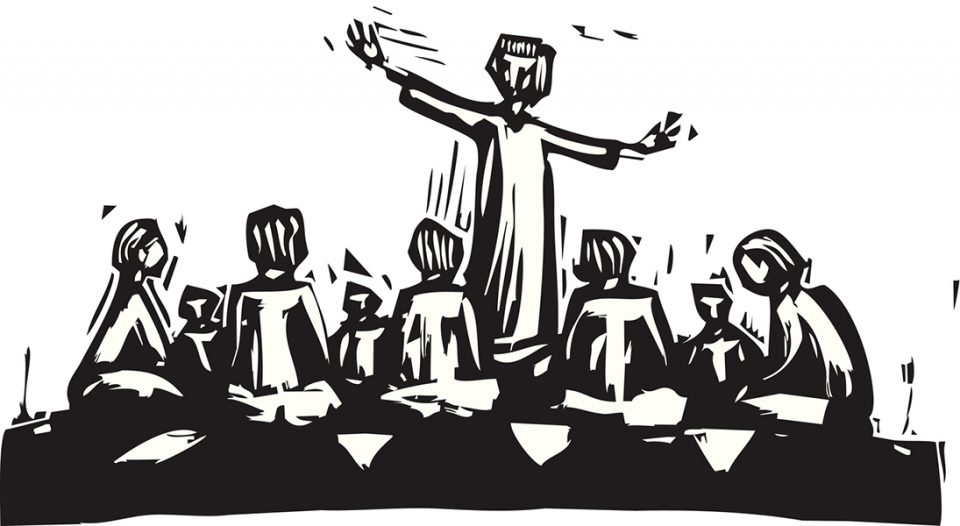 My Aunt Mildred had a bad habit of starting all her stories in the middle, apparently assuming that you already knew everything that led up to her walking in the door and announcing, “Well if that don’t beat all!” as the prelude to a long and involved story about people I didn’t know doing things I didn’t understand in places I never heard of. Our reading from Mark does a similar thing. “Then he began to teach them … .” Who is he? Who are “them’? What is he talking about?

It’s one of those times we must look back to the preceding verses to find out what’s going on here. In verses 27-30, Jesus asked his disciples, “Who do people say that I am?” And the disciples offered up John the Baptist, or Elijah or one of the prophets. Then Jesus grew more personal, “Who do you say that I am?” Peter answers for all when he says, “You are the Christ, the Messiah!”

This is where our text begins—Jesus explaining what it means for him to be the Christ, the Messiah. “The Son of Man must undergo great suffering, and be rejected by the elders, the chief priests and the scribes and be killed.” Jesus went on to talk about being raised after three days, but Peter quit listening at the part about being killed. Peter’s brain screamed, “No! Not Jesus! Not the Messiah! Not the Christ! That’s not right!” Peter grabs Jesus and takes him aside for a little private conversation. Peter did not gently chide him or suggest that Jesus might have chosen his words more carefully. Peter was angry, and he rebuked Jesus—told him in no uncertain terms that he was flat wrong and needed to take it back!

Peter quit listening at the part about being killed. Peter’s brain screamed, “No! Not Jesus! Not the Messiah! Not the Christ! That’s not right!”

When Jesus responds by rebuking Peter with the words “Get behind me Satan,” he is not calling Peter a devil—it really is Satan he is yelling at. Avoiding the cross was a real and terrifying temptation for Jesus. This was Jesus’ lifelong spiritual battle. Here he is, surrounded by an adoring crowd that has begun to call him the Son of God, the Christ, the Messiah. He pushes back against their praise, making it clear what those titles meant, talking about his impending suffering, rejection and death. In the words of Peter, Jesus recognizes the voice of the tempter. This is a genuine temptation that must be resisted firmly, leading Jesus to shout, “GET THEE BEHIND ME SATAN!” Jesus’ struggle with this temptation to avoid the cross began in the wilderness after his baptism and never really goes away. Shortly before he died, Jesus went to Gethsemane, where he told his disciples, “I am deeply grieved, even unto death.” Mark tells us he threw himself upon the ground and cried out in prayer, “Abba, Father, for you all things are possible; remove this cup from me; yet, not what I want, but what you want.”

Just as Jesus and Peter struggled with avoiding the cross, so do we. Which is why, after pushing Satan away, Jesus gathered the whole crowd together to teach them, and us, what it means to be a disciple of Jesus, a follower of Christ. “If any want to become my followers, let them deny themselves, take up a cross, and follow me.” Now, many of us, when we hear that, are confused and we resist. We think to ourselves, “Well, he couldn’t have meant for us to deny ourselves, not really. That’s just, well, that’s just un-American. We’re supposed to have the things we want because God loves us and will bless us. He must have meant that we should read the Bible carefully for all those wonderful promises about how we can be happier and richer and a more well-rounded and well-liked person.”

Uh, no. Jesus meant what he said. New Testament scholar N.T, Wright says, “it would not be much of an exaggeration to say that Jesus grew up under the shadow of the cross. Immediately after the death of Herod the Great in 4 BC there was a serious attempt at revolt in Galilee. Varus, the Roman general in charge in the province of Syria at the time, did what the Romans did best: he crushed the rebellion brutally and crucified around two thousand of the rebels. The Galilee of Jesus’ boyhood, then, knew all about Roman crosses … the towns and villages in which Jesus announced the kingdom of God would have had … memories of people known, loved, and lost to Roman brutality. When he told his followers to pick up their own crosses and follow him, they would not have heard this as a metaphor” (The Day the Revolution Began, p. 58).

You can read about Bennett Chapel Missionary Baptist Church in Center, Texas, on their website. The pastor’s wife was struggling with the death of her mother and with the question, “Why is my life so empty?” She decided she was called to be like her mother in giving unconditional love to others. She and her husband took the state classes to be foster parents, and it wasn’t long before the idea spread throughout the congregation. Bennett Chapel is a tiny congregation, made up of working-class people making a living as loggers, or down at the chicken plant, or at the hardwood flooring company. They didn’t have much to start with. Taking in these children was a tremendous risk and a major economic burden. But they decided to use what they had to make a difference in the lives of hurt, abused and unwanted children. Between 1998 and 2003, the members of that tiny congregation adopted 73 children. They took up their cross and followed Jesus. They “lost” their lives in living for Christ and others. Our invitation today is to lose our lives into the life of Christ, to lose our wills in the will of God, to give ourselves totally and completely to following the one who gave himself up for us upon the cross.

Lectionary blog: What will we do with the gift?

Lectionary blog: The mystery of the Trinity