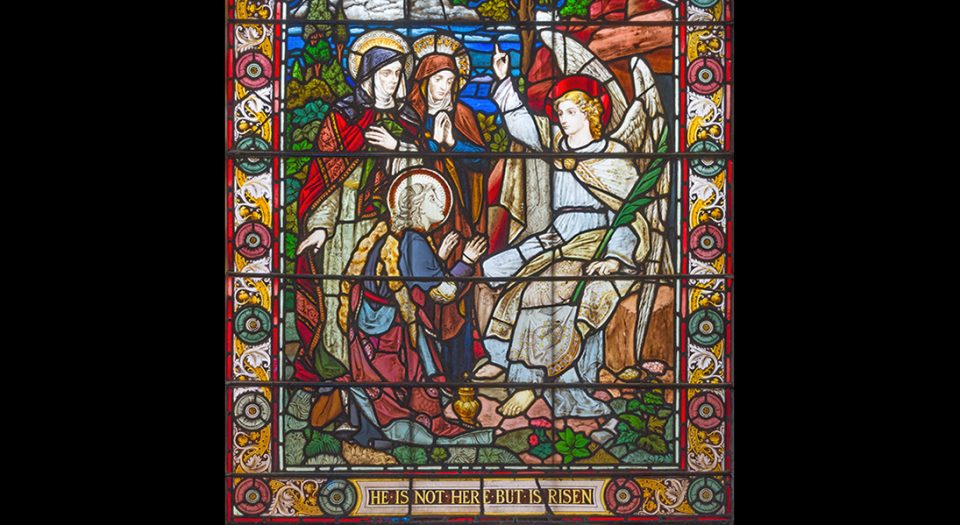 Some years ago, I was traveling east of Atlanta on Interstate 20, headed home from the church for lunch. Suddenly, everything went awry. There was a loud, terrifying sound, and amid a cloud of dust, I saw ahead of me a late-model sedan, spinning through the air. It landed upside down in the ditch. I and a few others stopped as quickly as possible and ran back to the site of the wreck, certain we were going to find a scene of blood, gore and death.

When I got to the car, someone in a medical uniform was down in the ditch looking in the window of the car. She turned with a look of total astonishment on her face. “There’s no one there!” No blood, no gore, no body, nothing. We searched up and down the ditch, the berm, the fence—we could not find anything. We came expecting death; we found an empty “tomb.” (Turned out that the car had been sitting empty and abandoned on the side of the road when it was sideswiped by a semi.)

Sometimes we forget that when the women went to the tomb, they went in deep sadness and despair. They went into a place of coldness and death, a prison house of the soul. They went with no hope and no anticipation of good news. They went to a place of mourning reluctantly, sadly, to perform a duty, to prepare Jesus’ body for burial, to put their friend into a grave. But when they got there, they discovered that things had changed. The tomb was empty; the body was missing, and there was an angel hovering about. “Do not be alarmed,” the angel says. “So,” the angel goes on, “you’re looking for Jesus? Sorry, he’s not here. He’s been raised. He’s gone to Galilee. Go tell Peter and the others to meet him there.” The women were stunned, reeling, speechless. Of course, they fled in terror and told no one, at least not for a while.

This business of rising again from the dead has never been easy for anyone to believe. It’s not natural; it’s not normal. It wasn’t normal 2,000 years ago, and it’s not normal now. All of us who proclaim it know it’s not easy to believe it. But it is a story full of possibilities for all of us. From death to new life isn’t just about going through physical death and then living happily ever after in heaven. It’s about being changed, transformed and resurrected in the midst of our circumstances—here, now.

From death to new life isn’t just about going through physical death and then living happily ever after in heaven. It’s about being changed, transformed and resurrected in the midst of our circumstances—here, now.

I once heard the story of a man in prison for murder. He had been sentenced to life without parole. He became a Christian while in jail and was baptized in the prison chapel. The baptistry? An official, prison-made, pine-box coffin, lined with a plastic tarp, filled with water. When I heard that story from the prison chaplain, familiar words that I have spoken so many times suddenly came to mind:

When we were baptized in Christ Jesus, we were baptized into his death. We were buried therefore with him by baptism into death, so that as Christ was raised by the glory of the father, we too might live a new life. For if we have been united with him in a death like his, we shall certainly be united with him in a resurrection like his (Funeral Liturgy, Evangelical Lutheran Worship, p. 280).

The prisoner who was baptized in a coffin didn’t get to leave prison because he got religion, far from it. He was going to be in prison for the rest of his life, and he knew it. For him, nothing external changed at all, and yet internally, everything had begun to change immediately. After the baptism he gave a “testimony” in which he said he had gone from being a dead man walking, a person already dead in spirit waiting to die, to life as a man filled with the new life of Christ living in him.

The question of Easter is this:
What sort of prison are we living in? What darkness grips our soul? What cold and clammy tomb is holding us back from a joyous life?

The message of Easter is this:
We must step into the cold waters of death in order to come out on the other side of the Jordan.
We must bury what’s holding us back in order to embrace the new life God is giving us.
We must lie down in the “coffin” in order to stand up with joy on Easter morning.

We are invited to a changed life today, a life full of hope and opportunity, a life overflowing with love and freedom, a life filled with the joy of the Risen Christ.