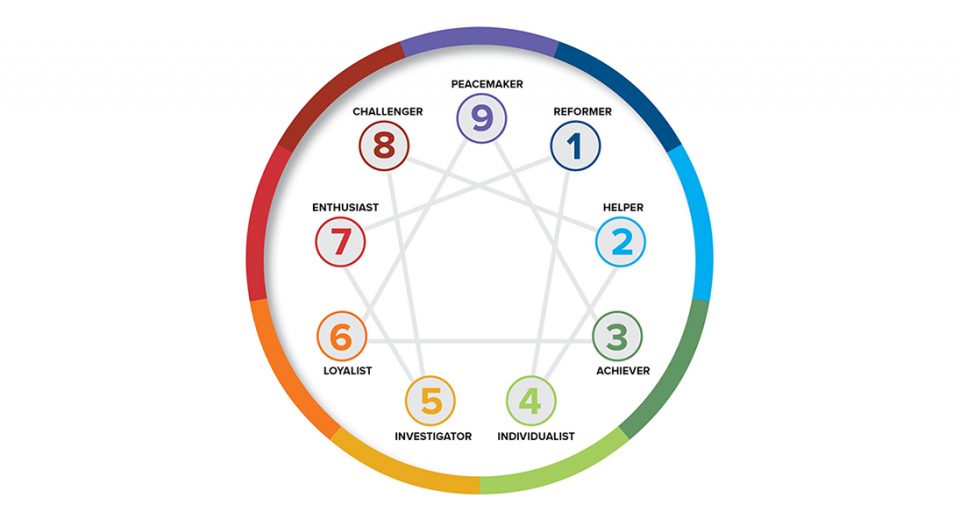 Twenty years ago, Peter Narum was sitting in worship at Galilean Lutheran Church, Clear Lake, Iowa, and noticed something. “The pastor, John Beck, was running around taking care of everyone,” he said. “Definitely not my style. So when he passed by again I said, ‘John, you just need to slow down.’ And he said, ‘I can’t help it. I’m a Two,’ and kept walking.

Narum learned that Beck was talking about the Enneagram, a system for understanding how personality differences shape our patterns of thought and behavior, with roots in ancient Christian mysticism. The word “Enneagram” literally means a drawn image (gram) with nine points (ennea). The image is usually a circle, “a symbol of wholeness, unity, eternity and the non-dual nature of reality,” Narum explained.

Around the circle, the nine points represent different personality types: the Reformer (One), the Helper (Two), the Achiever (Three), the Individualist (Four), the Investigator (Five), the Loyalist (Six), the Enthusiast (Seven), the Challenger (Eight) and the Peacemaker (Nine). These nine types are grouped into three centers: those who lead from the gut (Challenger, Peacemaker, Reformer), the heart (Helper, Achiever, Individualist) and the head (Investigator, Loyalist, Enthusiast).

Jeff Erbskorn is also a Two, the Helper, something he discovered while serving as a pastor of Ascension Lutheran Church, Shelby, N.C., a decade ago. At first, his gifts and passion for helping others fit well with the congregation’s needs. “I felt alive in ministry … and then, everything that had become a gift suddenly wasn’t,” he recalled.

Out of his instinct and desire to help, Erbskorn over-functioned: “I stepped in the middle of two groups that really needed to work it out themselves, and I became a lightning rod for conflict.”

Erbskorn’s synod suggested he use a consultant, who coached him through the Enneagram. “I began to be aware of how I might be contributing to the problem,” he said. “Looking back … I thought I knew exactly what was going on, but the vice of the Two is pride. Like a stopped clock, I was right, but only twice a day. The spiritual antidote was humility.”

The boxes we put ourselves in

Erbskorn found the process so meaningful that he became certified as a professional Enneagram coach, a role he pursues part time while serving as a pastor of St. Paul Lutheran Church, Aiken, S.C.

He often describes the Enneagram through the analogy of a shopping mall with different entrances: “Even though we could enter anywhere, we tend to park at one anchor store and enter that way—but why? The Enneagram invites you to discern your patterns. … It’s not a system that puts you into a box, but a system that asks whether there are boxes you put yourself in.”

“The Enneagram invites you to discern your patterns. … It’s not a system that puts you into a box, but a system that asks whether there are boxes you put yourself in.”

Our patterns of behavior “can be good or bad, helpful or hurtful,” Erbskorn explained. If that sounds like Martin Luther’s explanation of the saint-and-sinner nature of humanity, it’s no accident. Like Paul’s description of sin as falling short (Romans 3:23), “if we give our gifts too much or too little, we can miss the mark,” he said.

Narum, a pastor of St. James Lutheran Church, Verona, Wis., now teaches the Enneagram in workshops and counseling sessions. “I remember working with a Two [who] went to a spiritual gifts seminar and came back saying, ‘I have a gift for service.’ Well, that was obvious, but this very gift was killing her, almost literally, as she was failing to take care of herself. … What we’re good at tends to be the very thing that gets in the way,” he said.

Yet, like the law that leads to the gospel, the Enneagram does more than identify the traits that function both as gifts and obstacles in our lives—it also creates opportunities to grow in self-awareness. “The Enneagram has opened doors to help me understand, in a more concrete and practical way, not only that we’re different, but how. Therefore, my understanding has increased—toward myself and others,” Narum said.

Because every Enneagram type brings different and equally valuable gifts to the whole, some liken it to the description of the body of Christ, a unity containing “varieties of gifts, but the same Spirit” (1 Corinthians 12:4).

Erin Power, a deacon who serves on the Rocky Mountain Synod staff, said, “The Enneagram has made me a better member of my work and faith community by helping me understand how I show up in that space and encouraging me to look at why others show up the way they do. It has helped me be more understanding and compassionate, instead of being frustrated that someone just can’t see things the way I do.”

Ultimately, Erbskorn finds the Enneagram to not be a self-help guide but a way into prayer: “Lord, help me to know where I am … and guide me.” Like any map, he said, it’s not just about where we’ve been—but where we’re going.

Learn more about the Enneagram

The Center for Action and Contemplation