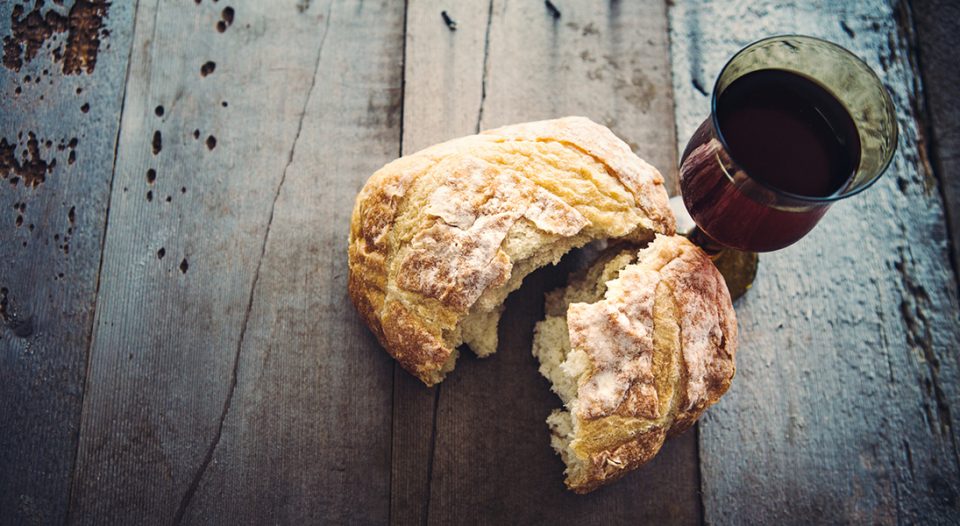 While they were eating, Jesus took a loaf of bread, and after blessing it he broke it, gave it to the disciples, and said, “Take, eat; this is my body.” Then he took a cup, and after giving thanks he gave it to them, saying, ‘Drink from it, all of you; for this is my blood of the covenant, which is poured out for many for the forgiveness of sins’ ” (Matthew 26:26-28).

This is a divine mystery we do well to understand as far as we’re able, but it’s one we should realize we can’t fully comprehend, not this side of paradise. How, exactly, does bread become body and wine become blood? We don’t know, except that it’s promised. And embedded in that promise is the power to save.

It’s Sunday morning in a congregation populated almost exclusively by undocumented immigrants. I’m there with a mission trip group from way out of town, happily worn out by two days of hard work putting in a new kitchen, cabinetry and floor. These veterans of several such trips around the world are tired but grateful to connect with a different congregation and make a tangible difference for the better with their Christian brothers and sisters.

In the service we move to communion. A couple of the mission trip volunteers have been recruited to sing with the congregation’s worship band during distribution. I stand at the front of the congregation as people flow out of the pews and into the center aisle to come forward to receive the elements—bread from me and wine from the assisting minister.

How, exactly, does bread become body and wine become blood? We don’t know, except that it’s promised. And embedded in that promise is the power to save.

A family of four comes forward and smiles as they hold out their hands. I’ve known them for years, having gone on mission trips with them when I was a parish pastor. Serving them communion now feels like a loving touch of home. They’re followed immediately by a weathered and weary Latino in his 80s, holding out his hands for a piece of the same loaf.

I realize that my friends are headed back to Kansas City and a relatively stable future. But this man is headed out the door—very possibly into the hard arms of Immigration and Customs Enforcement, jail and a return to his home country. All after receiving the same sacred gift of sacrificed life.

I suddenly hear what the worship band is playing. It’s Leonard Cohen’s “Hallelujah,” and the singers’ beautiful voices adorn the verse: “Our love is not a victory march; it’s a cold and it’s a broken Hallelujah.”

Who can understand this cold and broken hallelujah that is the very self-emptying of Christ, this gift that unites us? But then, understanding isn’t the point. The point is to receive and, in the receiving, to submit to and be swept up into the mystery that overwhelms us and makes us whole.

The Three Days: traditions of Maundy Thursday, Good Friday and the Vigil of Easter

On giving up and taking on