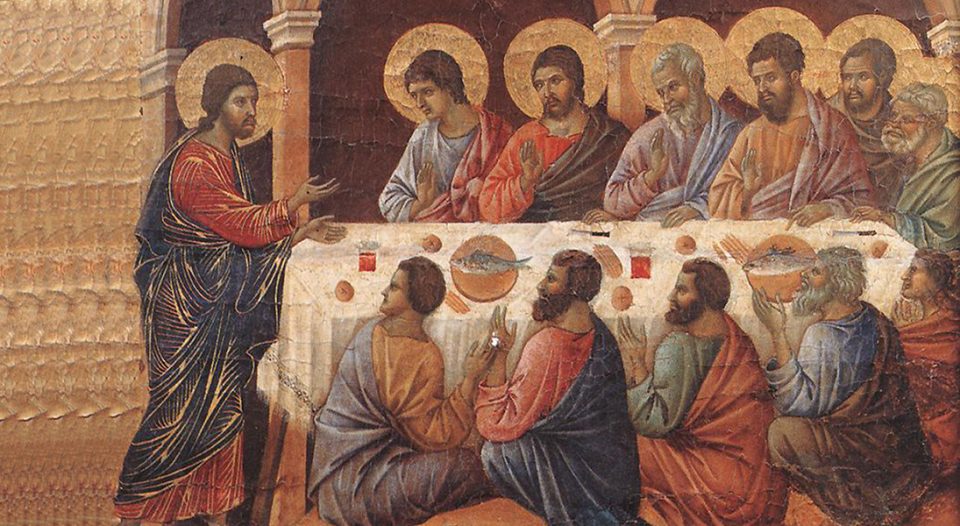 Christ appearing to his disciples at the table, Duccio di Buoninsegna, 1308-11

“While in their joy they were disbelieving and still wondering.” (Luke 24:41).

I grew up attending Sunday school at the local Missionary Baptist church. One of the rituals of Southern Baptist Sunday school in those days was reciting a “memory verse” when your name was called. The teacher told the boys in the high school class that while “Jesus wept,” was probably true when Jesus considered the sorry state of our souls and our behavior—it was no longer admissible as an appropriate memory verse, and we would have to learn something else. I chose “Still they stood there undecided, filled with joy and doubt” (Luke 24:41, The Living Bible). The teacher was not impressed with my honesty and questioned my use of The Living Bible. But, it was true then and it’s true now: I am (usually) “filled with joy and doubt” about the resurrection of Jesus. I am also, frequently at one and the same time, disbelieving and wondering.

Other than Lazarus and Jesus, there are no recorded cases in human history of someone coming back to life after several days of certifiable death. It just isn’t done. Yes, there are those who tell stories of visiting heaven after being declared dead on the operating table, etc. But that’s not the same thing—a matter of minutes really, not days in a tomb. So, I am filled with disbelief; the scientifically trained empiricist in me wonders at what exactly happened. Did it happen? If so, how did it happen?

As a young boy in a conservative and devout congregation, I felt like I was the only one in the world who thought like that. Everyone seemed so sure; everyone seemed so certain. Those who had doubts and questions were told to put those things aside and just have faith, which seemed both inviting and impossible. How does one turn off one’s brain once it has been turned on? And so, when I came across this verse, I sat up and paid attention. There it was, right there in the Bible, Jesus’ disciples reacting to the resurrection with exactly the same feelings I had. And they had more evidence: There he was, standing in the room with them, showing them his hands and feet, eating fish, wiping grease off his chin with the back of his hand (that last part’s not in the Bible).

It was something of a turning point for me. Up until that point, I had thought I had to understand everything, unquestioningly believe everything, never question anything, in order to be a Christian. After that moment, Luke 24:41 truly was my memory verse, my motto, my spiritual anchor in a restless sea. I could stand undecided, full of Christian joy at the good news of what God in Christ had done and continues to do for us, and at the same time fully embrace my doubt, disbelief and wonder at the many times the Bible and the church say things about God and Jesus that I find hard to accept or understand. It’s not an either/or situation—it’s a both/and. I am filled with joy and doubt.

I could stand undecided, full of Christian joy at the good news of what God in Christ had done and continues to do for us, and at the same time fully embrace my doubt.

Jesus did not give the disciples a hard time about their confusion. It is evident that he both expected and understood it. He knew that a human being coming back from the dead was not normal or expected. He knew that whatever belief they had about resurrection was about a general resurrection in the “last days,” and no matter how many times he had told them “and after three days, rise again,” they hadn’t really taken him literally. He knew that they thought he was a ghost, or a hallucination or something of the sort. And he acted accordingly.

First, he invited them to look at his wounds, to touch his body, to assure themselves that he was not a ghost. “A ghost does not have flesh and bones,” he said. Then he asked for something to eat. I doubt that he was actually hungry, though he may have been. It’s just hard to imagine a ghost eating and swallowing and all that. More proof that he was really real.

Then, he began to connect the experience of what they had seen and heard over the last few days to their belief system, to their understanding of God contained in the Scriptures. “‘These are my words that I spoke while I was still with you—that everything written about me in the law of Moses, the prophets, and the psalms must be fulfilled.’ Then he opened their minds to understand the scriptures” (Luke 24:44-45).

This is what we are about when we gather together as a community of faith. Most of us come with some admixture of joy and doubt, wonder and disbelief. We come seeking connection with a spiritual world we cannot prove yet know to be real. We come looking for Jesus, looking for evidence of his continued life and presence in the world. And we find that proof in the Risen Body of Christ, the church. The church gives evidence of that risen reality to the world not by its “sacredness,” not by adopting a floating-on-air above-the-fray spirituality—but rather in woundedness, in this world engagement with the eating and drinking, living and dying, and hoping and doubting humanity that surrounds us. To be witnesses to the risen Christ here and now, in this world, in this place is to get involved in life and death at its most confusing and conflictual. To be witnesses is to step out into a world at odds with itself, where people yell and scream across great divides of race, gender, economic interests, belief systems and national borders. To be witnesses is to step out into that world with words and actions of love and suffering, repentance and forgiveness, hope and joy. Most of all joy. “While they were in their joy they were disbelieving and still wondering.”