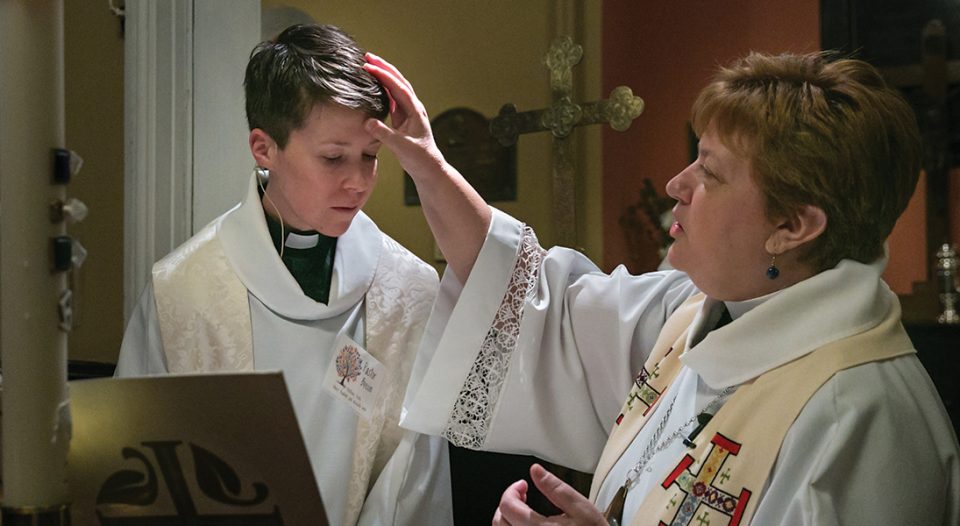 A service led by Pastor Beeson at St. Matthew Trinity Lutheran Church in Hoboken, N.J., would look and sound familiar to most ELCA members, from its hymnals, to its weekly children’s message and sermon, to the celebration of communion.

From a typical Sunday morning, it would be hard to imagine that this congregation made national news and broke ground that would have seemed unthinkable a few years ago, all while dealing with a shower of angry and hate-filled comments across social media.

That is, unless you attended the service on Feb. 11 when the pastor, Rose Beeson, a one-time IT telecommunications worker who found the Lutheran church as an adult, changed his name to Peter in a renaming ceremony to reflect his transition from female to male.

St. Matthew Trinity members were aware of their pastor’s transitioning. He had openly self-identified as queer for many years, and last summer during the “Stories of Resurrection” series, where members shared stories of a moment they had experienced new life, Beeson explained his journey of faith and of recognizing himself as transgender.

Beeson said the congregation was fully accepting, which, given its reputation as a radically welcoming place, didn’t surprise him. But choosing to publicly transition remained a weighty decision.

“There’s always that hesitation just because of the world we live in,” he said. “It was certainly something I thought about and prayed about for quite a while, and I tried to figure out the right way to come out in a way that was both letting me be the most authentic and fully present for the congregation. That’s what ultimately led me into deciding to go ahead and come out last summer.”

Beeson’s decision to transition wouldn’t have been accepted when he was young, growing up in what he calls a conservative evangelical denomination. But his faith was calling him into ministry even as a child.

“It was certainly something I thought about and prayed about for quite a while, and I tried to figure out the right way to come out in a way that was both letting me be the most authentic and fully present for the congregation.”

“The tradition I was part of at that time only allowed women to be missionaries or Sunday school teachers,” Beeson said. “I always figured someday I would grow up and be a missionary. When I left the church [and] came out as queer for the first time in my early 20s, that hope and plan vanished, and I did other things instead.

“But after I joined the [Lutheran] congregation in Arizona where the Holy Spirit pulled me in, I began to get involved and I would assist with communion. One day one of the counselors there came up to me and said, ‘You know, you really need to think about going to seminary.’ ”

Beeson believes it’s important for people who may be experiencing what he did to see that others find a path to fully being themselves.

Not everyone who heard the news has been supportive, said Courtney Kochuba, a member of the congregation council.

“On our social media there definitely are some trolls out there, and it got to me,” she said. “I reached out to the small committee that has been meeting since July to work with pastor. I said, ‘I don’t know if you’re seeing these Facebook comments coming in because I’m deleting them, but I need some help monitoring them because it is really starting to get to me.’ They all agreed.

“But what I don’t know is if anybody realized that pastor is an [administrator] on that page too. And yet I have never seen our pastor lose his cool or get upset.”

Beeson said it was helpful for him and the congregation to have a supportive bishop. New Jersey Synod Bishop Tracie Bartholomew, who called Beeson a “faithful, joyful servant of Christ,” believes the renaming ceremony was important for the church, and for her to be part of it.

“Because the New Jersey Synod has affirmed and welcomed the gifts of LGBTQ people for a long time, I felt it was appropriate and important for me to stand with Pastor Beeson and the people of St. Matthew Trinity,” Bartholomew said. “We have been providing education and events for congregations to learn about becoming safer and more welcoming places for LGBTQ youth. Standing with this congregation and their pastor seemed a logical way to demonstrate what we have been teaching.”

Beeson is comfortable discussing his story and differing viewpoints, and he hopes his story might help young people struggling with their identities. He also hopes his words may help during this time of increased hate crimes and use of derogatory language.

While he’s open to being an example of welcoming for all in the ELCA, Beeson also isn’t that different from other ELCA pastors, ministering out in the world during the week and from the pulpit on Sundays at a congregation that he said is dominated by a “deep commitment to God’s grace.”