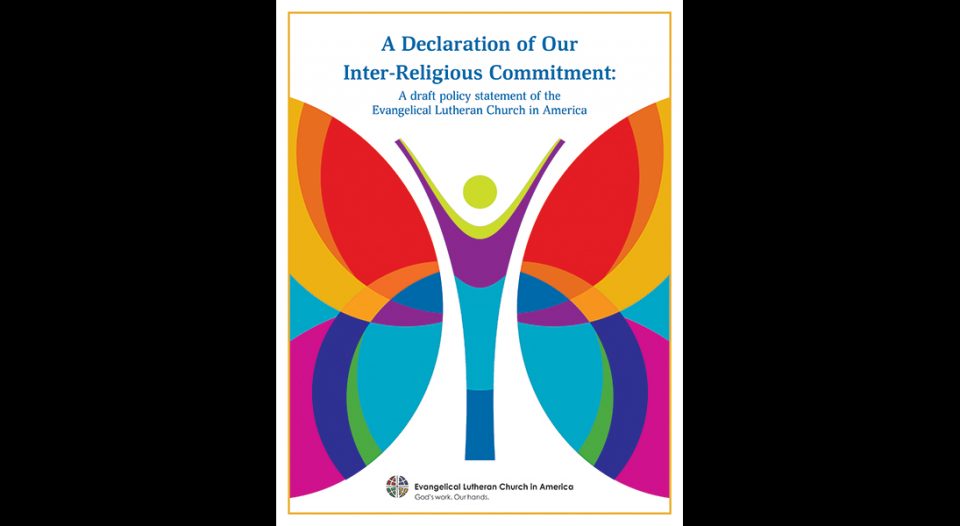 At the 2016 Churchwide Assembly, Presiding Bishop Elizabeth Eaton announced the appointment of an 11-member task force to develop a draft policy statement regarding the ELCA’s interreligious relations. On Jan. 8 the result, “A Declaration of Our Inter-Religious Commitment: A draft policy statement of the Evangelical Lutheran Church in America,” was made public for review and comments.

The call for an official statement on the ELCA’s commitments related to interreligious relations first came when the 1991 Churchwide Assembly adopted “A Declaration of Ecumenical Commitment: A Policy Statement of the ELCA,” which provided a framework for its work.

Kathryn Lohre, assistant to the ELCA presiding bishop and executive for ecumenical and interreligious relations, said the ELCA’s work in ecumenical relations helped shape its self-understanding and has allowed for the “interreligious task to be established on the basis of a strong Lutheran identity and witness.”

The new draft statement outlines the ELCA’s vision, calling and specific commitments regarding interreligious relations. It also addresses questions about what Scripture says about people of other religions and the church’s commitment to evangelism, among others.

While the ELCA has a long history of interreligious relations, stemming in part from its predecessor bodies, Lohre said the draft is a step toward offering a common theological basis and set of commitments for the church.

Patricia Lull, bishop of the Saint Paul Area Synod, chairs the task force, which is composed of people with diverse backgrounds related to work and experience with interreligious relations. “Each member of the task force is personally involved in interreligious work,” she said. “Each participant has brought a depth of knowledge to our common task.”

Since the draft was released, hearings and listening events have been held around the ELCA for people to provide feedback. Generally two types of feedback have been received—appreciation for the draft and its usability, and reactions against interreligious relations in general and concern about the church’s commitment to evangelism, Lohre said.

“These comments are, in my opinion, an indication of the work we have ahead of us [for] education across the church about our long-standing commitments to interreligious understanding and cooperation, as an expression of loving our neighbor and seeking God’s justice and peace for all creation,” she said.

The draft will ultimately be presented at the 2019 Churchwide Assembly, but for now it’s open for online commenting through June 30 before it goes through another round of reviews, a process that Lull credits to the church’s Reformation heritage.

“It strikes me that one of the lasting gifts of our Reformation heritage as Lutherans is this openness to the wisdom of many voices as we craft a living statement as 21st-century Lutherans,” she said. “Once adopted, this statement will serve as an excellent teaching tool, as well as a statement of our core commitments in interreligious relations.”