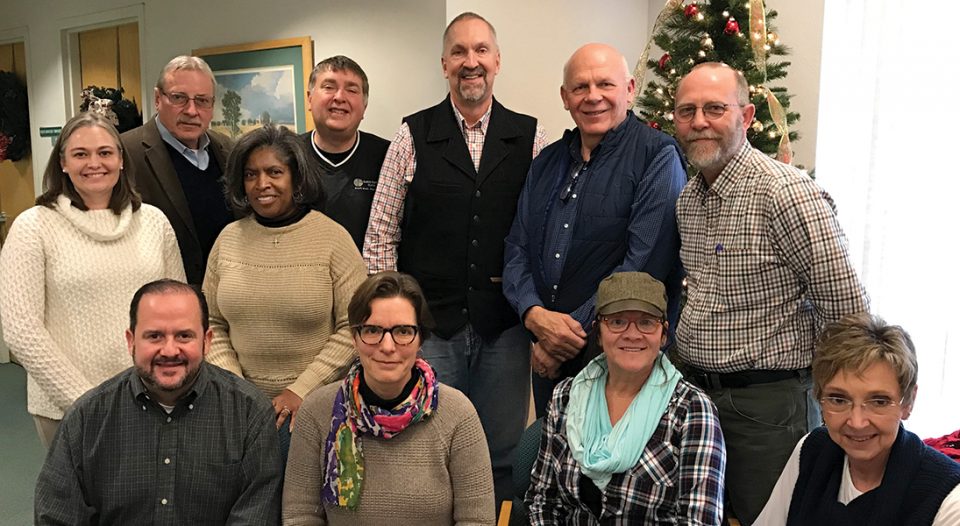 During a trip to North Dakota and South Dakota in 2017, staff from ELCA Advocacy and the churchwide office met with synod staff members, bishops and ELCA members to discuss the importance of the farm bill to rural communities.

Since 1938 the U.S. government has approved a farm bill every five years. First created to assist farmers during the Great Depression, the farm bill today is expansive legislation reaching into the lives of every American—it’s the federal government’s primary agriculture and food policy tool.

For Lutherans, this legislation has long been a focus of denominational advocacy work, but 2018 is the first time ELCA Advocacy is putting its entire staff behind farm bill efforts.

Amy Reumann, Advocacy director, said the bill is a priority for focusing on nutrition, rural development, research and conservation efforts. “The farm bill is so vital for programs that are really important to us … from the Supplemental Nutrition Assistance Program (SNAP) to emergency food and commodities. This year we are also working on [the farm bill] in terms of honoring land claims by indigenous people who are impacted by it,” she said.

Reumann and other Advocacy staff members traveled to North Dakota and South Dakota in 2017 to meet with farmers and learn why the bill is so important for farming communities.

“We heard that the farm bill is immensely important for what their next five years are going to look like,” she said. “We heard some great perspectives and ideas that we’d love to get heard more in Washington. … Farmers use all sorts of different techniques, and they have an incredible sense of responsibility to restore the land as they farm.”

For many Lutheran farmers across America, their pride in farming and taking care of the land is attached to their faith. “They truly see it as a gift from God,” Reumann said.

“They have a commitment to feed people, and there’s an awareness and a sense of pride to that.”

“They have a commitment to feed people, and there’s an awareness and a sense of pride to that.”

Tom Tveit, a member of Resurrection Lutheran Church in Pierre, S.D., and a retired rancher and farmer, was one of those who met with Advocacy staff to discuss the 2018 bill. But he said his advocacy for the bill is not just for farmers and ranchers.
“The farm bill provides ways to help provide food aid to people who need it both domestically and internationally,” he said, speaking on the ways the legislation lines up with his Lutheran faith.

The bill’s importance can seem obvious to rural Lutherans, while those in suburban and urban areas aren’t as aware of the ways it touches their lives. “Our challenge is that it shouldn’t only matter to the rural populations,” Reumann said. “We live so disconnected from our source of nutrition.”

One way many non-rural Lutherans become involved with farm bill-related ministries is through the church’s commitment to ending hunger and increasing food security. From the ELCA’s largest to its smallest churches, almost every congregation has some kind of hunger ministry, from collecting money for ELCA World Hunger to countless food pantries, soup kitchens and community meals.

Despite the ELCA’s hard work to fight hunger, Reumann said more than 95 percent of domestic food aid comes from sources other than the church—primarily the federal and state governments. “The government has the infrastructure in place to deliver food wherever it’s needed, especially in rural areas,” she said.

When churches partner with the government to provide food where it’s needed, that’s part of the farm bill at work. The ELCA Advocacy team hopes to see that vision of partnership between diverse groups of Americans as part of the 2018 bill.

“I would like to see a holistic bill that addresses adequately the needs of nutrition as well as giving the support that rural areas need,” Reumann said. “I’d like to see a vision and commitment not just for food policy but also for people and communities.”
Reumann also hopes legislation like the farm bill inspires Lutherans to become excited about advocacy work and speaking up about issues that impact them. She noted that 150 participants learned about issues and how to do advocacy, including visits to representatives on Capitol Hill, in January during the ELCA Hunger Leaders Gathering in Washington, D.C.

She encouraged people to visit the ELCA’s Advocacy website and sign up for alerts that encourage action, as well as build relationships with lawmakers and people in communities that rely on the church for food assistance.

“Advocacy is faith formation by teaching people and providing opportunities for people to speak their faith in public—bringing it to bear on a public issue,” Reumann said. “I’m very interested to see how advocacy develops leaders in the church and teaches people how to wrestle with Scripture, theology and relationships.”

Farm bill brings Lutherans together
Raise your hand if you’ve eaten today! OK! Now raise your hand if you plan on eating tomorrow! All right! Everybody who had a hand up should be interested in the 2018 Farm Bill now working its way through Congress. It shapes the future not only for our farmers and their communities, but also nutrition programs for millions of Americans in need nationwide.
Download Now