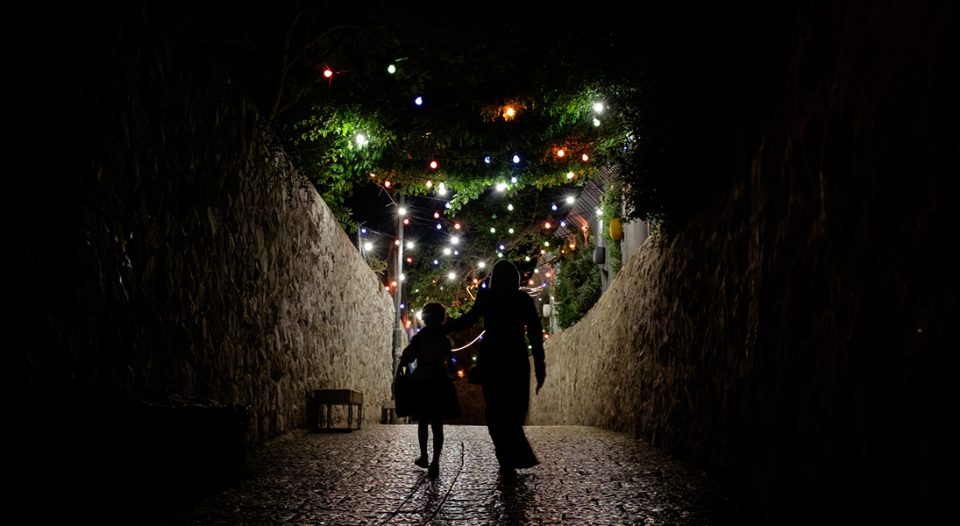 Editor’s note: Ongoing protests in Gaza for the “Right of Return” escalated on May 14, the eve of the 70th anniversary of the Nakba, and on May 15, when the U.S. Embassy relocated in Jerusalem. About 60 Palestinians were killed and more than 2,700 were injured during the protests. Here, two ELCA missionaries from different neighborhoods in Jerusalem offer reflections.

Keep watch
By Jeni Grangaard, an ELCA Young Adults in Global Mission country coordinator based in an Arab community near the West Bank

May 15: Our neighborhood in Jerusalem is quiet, per usual. Preparations are underway for Ramadan. Tonight’s feast before tomorrow’s fast is on the stove. Outdoor lights are being strung. Steps are being swept to usher in visitors. Ramadan is a joyful time. In hunger, God—Allah—sustains through prayer.

Elsewhere things aren’t so quiet. Upward of 60 human beings lost their lives yesterday in Gaza. More than 2,700 were injured. Bodies with holes the size of fists are being dressed for burial.

Stores are shuttered, school was canceled and the buses didn’t run today in line with the general strike called for after yesterday’s massacre. Today also marks 70 years since the first catastrophe, the Nakba, which made refugees out of 700,000 people.

What can be said? Of course we are safe. Our privileges cushion us from the violence that is contained 1 mile and many miles from here. We worry for the safety of our companions and friends.

What must be said? Lives are being lost. A culture is being erased. Rights are being stripped. And the Palestinian companions with whom we walk, work and live are gracious, loving, resilient and worthy of dignity.

We are making plans for tomorrow, though we don’t know yet what today will bring. My daughter will go to school to practice for the graduation in support of her 5-year-old friends. Her class will dance. I will write. My husband, Colin, will make visits. My son will wiggle, wriggle and climb—and jump into his Palestinian teta’s (grandma) arms when she gets to the top of the stairs.

I’m grateful that the world is watching, that you are watching. Keep watch. Read. Try your best to hear the stories of the people of this place. Light a candle. Fast. Pray. Dance.

Carrying on amid despair
By Adrainne Gray, an ELCA missionary with the Evangelical Lutheran Church in Jordan and the Holy Land, based in West Jerusalem

Helpless, despair, shoulders shrug, all five fingers pinched together and wrist flicked upward. “Shu Hada?” (What shall we do?)

Some keep on singing.

The trolley runs through Jerusalem, as usual. Flags of Israel and the U.S. fly side-by-side on light posts. “Trump is a Friend of Zion” signs accompany the flags.

We live in Jerusalem: Children in uniforms going to school, secular and parochial. Palestinian co-workers who faithfully commute to the church offices in the Old City. My American counterparts sent here like me. The Greek/Arab merchant who owns a store on the West Side of Jerusalem. Orthodox Jewish mothers who stay home with the children while their husbands walk to the Western Wall to pray, bobbing and reading the Torah.

We all live in Jerusalem.

Nothing has changed. But everything is changing.

On the east side of Jerusalem, the sidewalks in front of the Arab markets around the Old City are dismantled and lay in uneven rubble, with small machinery blocking pedestrian traffic. I could easily twist my ankle in the mess since there is no designated space for customers to pass. It’s rubble from a beautification project. The city is preparing the corridor for the flux of tourists and Israelis who will come—not to Arab Jerusalem but to the Jerusalem of Israel. It’s a project initiated by a quiet, ongoing war—a war that looks completely different here than it does in Gaza.

It has been a bloodbath in Gaza; in Jerusalem we’re experiencing slow asphyxiation.

Skirmishes rise up in pockets around the outskirts of the city and in the West Bank. They try again and again to protest the takeover of Jerusalem—a takeover by the promise of an American president, with the force of a pen, enforced by a military brigade.

On this day, near the garbage dumpster, I find my Orthodox Jewish neighbor with her son. My favorite kid in the neighborhood, he is about 19 months old. His name in Natan (Nathan), but we have nicknamed him Asher, the happy one, son of Jacob and Zilpah. This time Asher is squat down, focused on a cat that is devouring the meal of scraps that he and his mom have placed in a bowl. Asher takes notice of us, and having no spoken language developed yet—not English nor Hebrew—he bounces up and down, grinning, pointing and gratified that he offered a creature food and it gladly ate. We love Asher.

“Yes, Natan, I see the cat. Very good boy, Natan, very good.” His mother smiles as she patiently waits for the cat to finish and Asher to fully experience the feeling of giving.

Does his mother know that an 8-month-old Palestinian died that afternoon in Gaza from tear gas inhalation? That baby died so Asher could have a slow, lazy day of exploring the world around him, safely. At least that is what I’m told.

We are in Jerusalem, one of the most sacred cities in the world, approximately one hour away from the deadly protest in Gaza. The distance is equivalent to a typical American’s round-trip commute from suburb to city. We don’t smell the smoke, we don’t hear the gunfire, we don’t hear the cries of the wounded from Gaza as we shuffle around the city that they want access to.

We are moving about in our routines, shrugging our shoulders, trying to carry on. When we are in safe spaces within the confines of an office, the sanctuary of our churches or deep in a shopkeeper’s store, we lament not only the loss of life in Gaza, but the slow loss of life lived in an ever-changing Jerusalem.