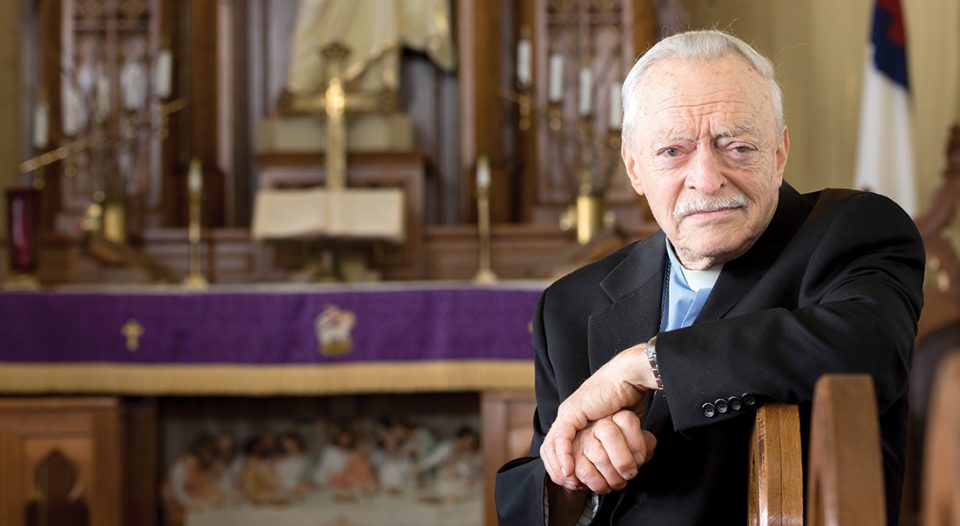 Peter Boe, born with the name Volodja Sinegins, was about 7 and his brother was two years younger in 1944 when a woman shouting was all that stood between them and a soldier brandishing a pistol and threatening to derail their escape from the Russian army in Latvia.

“They’re not Jewish. They’re Latvian Evangelical Lutherans,” Boe recalled the woman saying. The woman, Rose Austrums, saved Boe and his brother with her statement that was, at the time, a lie, but which turned out to be prescient.

The boys, who endured an arduous and confusing journey before Boe turned 10, wound up as Lutheran pastors. Boe, 80, retired in 2003 but is now serving as interim pastor of St. Paul Lutheran Church in Merrill, Iowa. His brother also served as a pastor before dying in 2002.

But by Boe’s estimation, along with DNA results, he is of Belarusian Jewish descent. Still, much of their childhood will remain a mystery, including being sure if the woman who cared for them—Miss Sinegins—was their mother, though Boe believes it’s the case.

When she became ill, Miss Sinegins sent the brothers to an orphanage. Their lives were difficult as conditions in the places they stayed were sparse. On top of that, they had no history—not of parents, birthdays (they chose birth dates at random) or home.

In 1949, the brothers were flown to America and were eventually adopted by Victor Boe, a dean at Concordia College in Moorhead, Minn., and his wife, Hilda, the school’s librarian. Despite their background, both his adoptive parents told him not to become a pastor, along with most everyone he knew.

“Everybody said, ‘Don’t do it,’ ” Boe recalled. “But the motivating factor for my going was the sense of an inner calling.”

He attended Wartburg Theological Seminary in Dubuque, Iowa. His brother spent four years in the Marines and then attended Luther Seminary in St. Paul, Minn.

“The motivating factor for my going [to seminary] was the sense of an inner calling.”

After graduating from Wartburg, Boe served as a missionary in Nigeria, where he stayed until 1971.

“I enjoyed every minute of it,” said Boe, who met his wife, Betty Lou, while on furlough. They became engaged while he was in Nigeria—by mail. “I bought her a ring and sent it in the mail,” said Boe, who packaged it in a way that no one opening the mail would suspect it was there.

Betty Lou said she knew it was coming and was excited when it arrived. “I kept it wrapped up in cardboard,” she said. “I could feel it, but I didn’t open it for quite a while.”

Her husband’s difficult childhood, Betty Lou said, may be part of why he’s a caring pastor, particularly with children.

“He really likes to be around people, working with children and families, and going to nursing homes,” she said. “He also likes music and dance and a lot of things that go along with the ministry.”

Finding out about his Jewish heritage didn’t surprise Boe.

“I’m wondering whether my Jewish connections may have ignited my religious curiosity, spiritual growth and development,” he said.

Boe has been working on a book of his insights about his faith, which has been shaped in part by his childhood. He hopes it will inspire others in the word of God just as those words have inspired him.

“I narrowly escaped death during World War II,” Boe said. “From Hitler’s pogrom of massacring Jews, from disease, being strafed by Allied fighter planes, and by whatever else afflicts newborns and children around the globe.”

Yet he endured to have four children, 12 grandchildren, and to serve both abroad and at several U.S. congregations.

Boe hopes to continue sharing his experiences with anyone they will inspire.