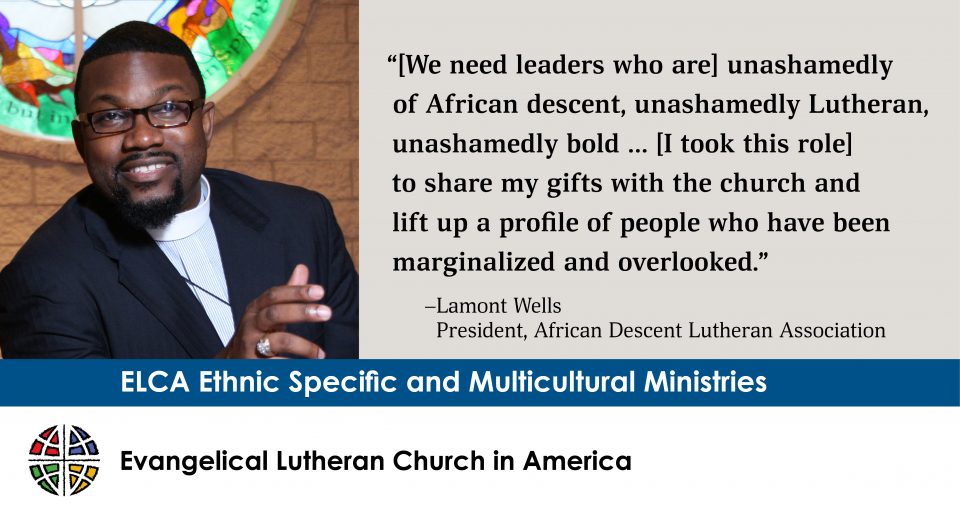 As president of the ELCA’s African Descent Lutheran Association (ADLA), Lamont Anthony Wells is on a mission to help build not “a color-blind” church but “a color-brave one,” he said. “It’s important for us to be brave enough to have discussions and solve some of the biases that are real in our church.”

Wells has served as president of the association since 2015. He took on the role because of the need for the church to have leaders “unashamedly of African descent, unashamedly Lutheran, unashamedly bold … [and] to share my gifts with the church and lift up a profile of people who have been marginalized and overlooked,” he said.

“One of our primary roles and goals is to connect people of African descent, African Americans, African nationals and Caribbeans (in the ELCA) and gather together as a community,” said Wells, who is also director for evangelical mission for the Metropolitan New York Synod. “We have biennial assemblies, regional gatherings to do fellowship and service.”

Another priority for the ADLA is bridging connections with people of color in other mainline denominations.

“At our last biennial assembly in 2017, it was a historic assembly,” Wells said. “We were the first mainline church organization to have a joint assembly with the Union of Black Episcopalians. We worshiped together, did forums, education, fellowship.”

Wells is on a mission to help build not “a color-blind” church but “a color-brave one.”

It’s important for the groups to come together to discuss discriminatory barriers and other challenges, strategies for combatting them and triumphs, he said.

On the immigration front, the association is working to raise awareness within the ELCA that immigration policies are hurting many other people besides Latin Americans, and these people also need ELCA advocates, he said.

“There are people from Africa and the Caribbean that are being hurt” by immigration policies, he said. “Where I serve, the Haitian community, the Jamaican community, are suffering. It’s our job to lift up their voices, to do the same level of advocacy.”

A major association goal is to increase African-descent leadership within the church—but barriers persist, Wells stressed.

“We go through the process, get the education,” but once it comes time for a call, there’s a prolonged wait, he said. “We are the largest minority in the ELCA. This gravely affects us disproportionately, particularly with black women who have been approved for ordination. The length of time they wait for a call is up to two to three years. It’s an atrocity.”

Discussions need to take place with the gatekeepers to congregations to re-evaluate why those of African descent are so often not called to lead U.S. congregations and to address the barriers, he said, noting, “What we have found is congregations will put a white person in a black church, but there’s s this reticence to put a black person in a white congregation.”

The association is playing an important role within the ELCA, said Wells. “It gives the ELCA an opportunity to understand and work with and partner with people of color in a strategic way that it has been unable to do on its own,” he said. “Our presence helps the ELCA to fulfill many of its objectives to be more inclusive and to be anti-racist.”