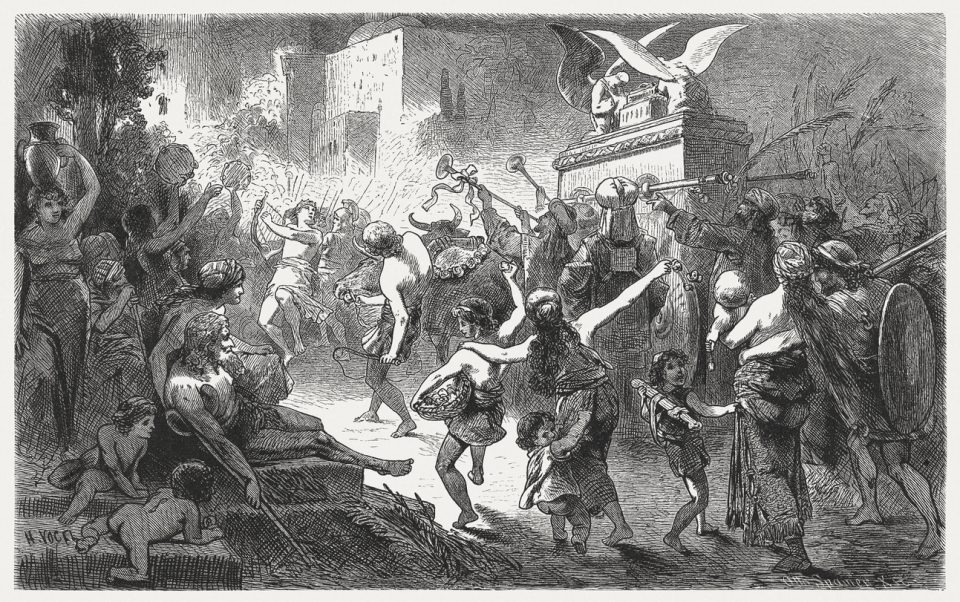 This week’s lectionary readings tell the story of two very different kings who both made poor decisions based on overconfidence that lead to fatal consequences for someone else. The difference is that one king came to terms with his overconfidence and publicly abased himself. The other didn’t repent. In both cases, the spirit of God continued to move and bless the people, even amid the failings of rulers.

The first king was David. He made plans to move the ark of the covenant from Baalah/Kirath Jearim into his new capital, the City of David. But then he made his mistake. He ordered the ark to be loaded on a new cart pulled by oxen instead of carried by poles on the shoulders of the Levites.

Rashi, a medieval Jewish commenter, said this decision displayed David’s overconfidence and lack of humility in his early monarchy. Rashi points out that every Israelite child knew that “because the service of the holy things belonged unto them [the Levites], they shall bear them upon their shoulders.” The ark was to be carried by the humans God appointed to the task!

According to Rashi, David was falsely overconfident about his knowledge of the Torah and what to do with the holy articles, claiming, “Your laws have been like songs to me in the house of my pilgrimage.” If that had been true, David should’ve known the ark was to be borne by appointed Levites who would be watching for uneven patches in the road and could adjust accordingly, rather than carried on a cart like produce to a market or dung to a field.

When the cart faltered because the oxen stumbled, a man named Uzzah grabbed the ark to prevent it from falling and was killed for ignoring God’s commands about treatment of the holy objects. David knew immediately what he’d done wrong and stowed the ark in the home of Obed-Edom, a Korathite Levite (1 Chronicles 26:4) who was one of the men who should’ve been appointed to carry the ark in the first place.

Putting an ark on a cart instead of having humans carry it may seem like a small matter. But in God’s ongoing relationship with God’s people, disobedience concerning people and things that God has a special focus on tends to have disastrous consequences (Leviticus 11, 1 Samuel 13:13, Numbers 14, Acts 5).

As a king, responsible for the beloved community, David needed to learn early in his reign to take God’s instructions seriously. Through Uzzah’s death, he did. David made two changes.

When he brought the ark up the rest of the way to the City of David, he had Levites carry it (1 Chronicles 15:12-13). He also chose to accompany the ark with humility. He took off most of his royal garments and danced passionately around the ark to celebrate God coming to live with him.

His wife, Michal, saw the performance and chided him for it. But David responded that he would become even more undignified and be humbled in his own eyes (2 Samuel 6:22). David recognized that he’d been hasty and foolish and that it’d cost a man his life, and he repented. True repentance isn’t simply being sorry; it’s an endeavor to correct the wrong.

We must note that during these two events the spirit of God was on the move even while both kings were making poor decisions based on their overconfidence and pride.

The second king in the lectionary text is Herod. In Mark’s Gospel, Herod Antipas is  presented as a conflicted and not-overly-ruthless king (more properly, tetrarch). Antipas had John the Baptizer arrested but protected John from Herodias, Antipas’ wife, because he feared John and knew him to be a righteous man. In fact, Antipas liked to listen to John speak (Mark 6:17-20). But just as David was initially too involved in celebrating the movement of the ark to make good decisions, so too Herod Antipas was too delighted in the celebration he threw to remember to be wise.

When Antipas’ daughter danced, he was so pleased that he promised her whatever she wanted as a reward, up to half his kingdom. He was confident that whatever she requested would be an easy thing for him to grant her.

This was the opening that Herodias was looking for. She was finally able to use their daughter’s request for John the Baptizer’s head to work around her husband’s protection of the man who had accused them both of marital impropriety. Herod was caught in a trap of his own pride, and because of his oath and not wanting to be embarrassed in front of his guests (Mark 6:26) he carried out his wife and daughter’s request to kill John, even though he didn’t wish to do so.

We aren’t told that Herod Antipas repented as David did earlier. Antipas has a mixed portrayal in the rest of Scripture. Luke’s Gospel has Jesus call Antipas a “fox” pejoratively (Luke 13:31-33), and Antipas mocked Jesus after he refused to defend himself (Luke 23:8-11). But ultimately, Antipas didn’t find Jesus guilty or worthy of crucifixion (Luke 23:14-15). In Mark’s Gospel, Jesus warns his followers to beware the yeast of Herod (Mark 8:15). By these accounts, Herod doesn’t seem to have major changes of heart.

We must note that during these two events the spirit of God was on the move even while both kings were making poor decisions based on their overconfidence and pride. The ark, God’s throne on earth, blessed Obed-Edom while David sulked. And while Herod Antipas was having John killed, Jesus was feeding 5,000 people and proclaiming the good news that the kingdom of heaven is advancing.

In our own lives, when we witness rulers making poor decisions that cause others to suffer and die, we must remember that the kingdom of heaven is still advancing. We must pray and advocate for the repentance of our leaders from foolish overconfidence, that they (and we) embrace the ways of God’s kingdom: respect for God’s holiness and love of all our neighbors.