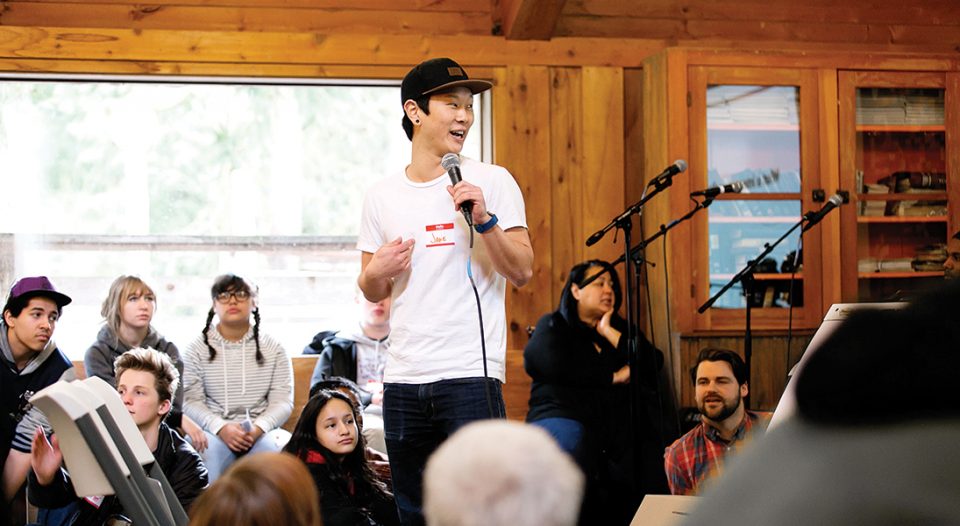 Jake Bailey, an active participant with the Ecumenical Youth Collective in Bend and Portland, Ore., speaks during a retreat.

Editor’s note: This is the second in a two-part series highlighting youth and young adult ministries funded by Always Being Made New: The Campaign for the ELCA.

In recognition that many youth and young adults aren’t connected to faith communities, ELCA leaders in Portland, Ore., are partnering ecumenically to meet young people where they are—out in the community.

“The neighborhood is the program”

Begun in 2015 under the direction of Ron Werner Jr., a mission developer with the Oregon Synod, the collectives are funded by a $40,000 grant from the Campaign for the ELCA. Werner’s vision is “to create generous, inclusive and wholehearted spaces for faith formation” among youth and young adults on the margins of our communities, he said.

“There’s power in having an adult who cares about them and loves them and encompasses them during the storm and stress of their adolescence.

Currently there are five collectives in the neighborhoods of downtown Portland, southeast Portland, the Gorge, Bend and Ashland. The collectives start by listening to the concerns of the communities’ young people and their parents, including fear of deportation and being pulled over by the police because of their skin color, Werner said. Leaders then design programming and activities around the themes and topics raised by the youth.

“It’s a little different from when I was doing youth ministry 10 years ago, where we created a program and then our youth would go out and get involved in the neighborhood,” Werner said. “The neighborhood is the program.”

Supporting youth as they advocate for more inclusive school policies and accompanying them when their parents meet with U.S. Immigration and Customs Enforcement are examples of the collectives’ ministries, he said.

Kyra Butler, 29, helped organize the retreat and is helping train youth leaders. She said one of her most memorable retreat experiences was watching a student say how important it was for them to talk about these issues in a setting where they were free to express their thoughts and concerns.

For youth involved in the collectives, “there’s power in having an adult who cares about them and loves them and encompasses them during the storm and stress of their adolescence,” Werner said.

One key impact of the project has been leadership development among youth and young adults in the area and within participating denominations, Werner said.

It’s a different approach from sending them to leadership camp. “We are accompanying them in their own leadership journey,” he said. “There’s training at every step of the way. It also includes helping them process [the question], ‘How am I a leader in my life in the pressures that are facing me and my loved ones?’ ”

Sara Rosenau, pastor of Waverly Heights United Church of Christ, Portland, partnered with Werner to write the grant request for the collectives. She has seen impact in the way the collectives build “energy and momentum across denominations for the benefit of youth and youth leaders.”

Jake Bailey, 22, helped organize the last youth retreat and has been part of the collectives in Bend and Portland. He likes the fact that the collectives are grass roots-driven.

“As someone who doesn’t associate with the faith community, but who has dreams and aspirations and hopes for this world and our community regardless of faith, to have a community have these conversations … and work together toward a common goal really has been inspiring,” he said. “It has shown me the work and rewards in truly creating a community that’s empathetic and can learn from each other and dream together, just how much power that can have.”