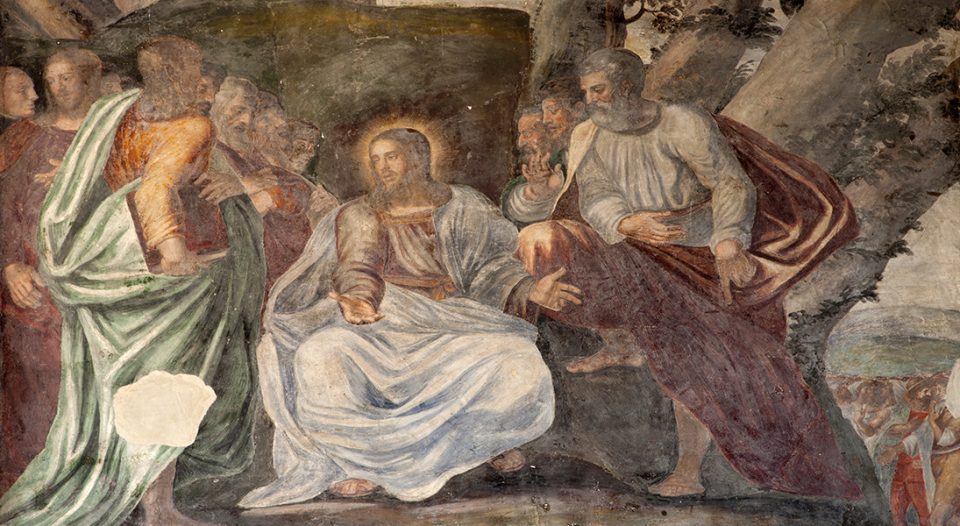 Across from Tennessee State University in Nashville, there is a congregation that has the longest name I’ve ever seen on a church sign: The House of the Lord, Which is the Church of the Living God, The Pillar and Ground of the Truth, Without Controversy, Incorporated.

Without controversy! Whoever heard of a church without controversy? A church sign I saw in Decatur, Ga., seems more accurate to me. This church said it was “Free For All Baptist Church” When I saw that sign, I imagined elderly deacons in their Sunday suits engaged in an ecclesiastical version of a bar fight, throwing down their Bibles and wrestling each other to the floor in front of the communion table.

Even a cursory look at the Bible and church history shows that the people of God have always been—and probably always will be—a contentious lot, given to fussing and fighting with each other about all sorts of things, some of which matter and most of which don’t. In today’s Gospel lesson, Jesus finds his disciples arguing about one of those things that do not matter, not in the family of God, anyway. They have been fussing and fighting over which one of them is “the greatest.”

It is particularly ironic and disappointing that they are arguing about this right after Jesus has told them that as the Messiah he will have to suffer and die for the world, and that as his followers they will need to “deny self and take up a cross” as well. He presents them with a model of complete helplessness and weakness, and they respond by contending for positions of power and influence. In other words, they simply don’t get it.

Jesus said in Mark 9:31, “The son of Man is to be betrayed into human hands, and they will kill him, and three days after being killed, he will rise again.” If the disciples heard his words, they certainly didn’t hear his meaning. They had figured out he was the Messiah, but instead of thinking about service, they were trying to sort out their positions of importance in the new administration.

Jesus overheard the argument and asked, “What were you talking about?” At least they had enough understanding to be ashamed and be quiet. No one even tried to answer him. Could it be that, looking into Jesus’ face, it began to dawn on them just how wrong they were, just how far they had strayed from the path Jesus had called them to follow? I imagine Jesus taking a deep breath, sighing and with a somewhat forced smile, saying, “Come here y’all, sit down, let’s talk. Let me see if I can find a better way to explain this to you.”

He proceeded to tell them that whoever wants to be first must be last and a servant of everyone. This “great reversal” is consistent with many other things Jesus has said over and over throughout the Gospels about how in the kingdom of God things are almost the mirror opposite of how they are in the world. Then, our Lord did a monumentally important thing in the history of the church. There, on the spot, Jesus invented the children’s sermon, complete with an actual child as the object in the object lesson. Jesus and the disciples were in the ground floor room of a house, it had open windows and doorways, and a crowd had gathered to listen to him teach his disciples. Jesus reached into the crowd and pulled a child, probably a toddler, into the room. Then he said, “Whoever welcomes one such child in my name welcomes me, and whoever welcomes me welcomes not me, but the one who sent me.”

He proceeded to tell them that whoever wants to be first must be last and a servant of everyone. This “great reversal” is consistent with many other things Jesus has said over and over throughout the Gospels about how in the kingdom of God things are almost the mirror opposite of how they are in the world.

With these words, Jesus proclaims the ultimate great reversal. In the ancient world, children were symbols of powerlessness. Outside of normal parental affection, children were, almost literally, nothing. Pastor Peter Marty says that “in the Greco-Roman world a father could punish, sell, pawn off or even kill his own child” (The Lectionary Commentary, Eerdmans, 2001, p. 244).

It is interesting to note that the Greek words for child and servant have the same root and that Jesus used both these images, child and servant, as symbols of who the Messiah is and who we, the followers of the Messiah, are called to be. Children and servants, powerless and defenseless ones, that’s us.

Our modern world gives highest honor and respect to those with power and authority and importance. People in our world seek positions of strength from which they can control and manage others. And the call of the gospel to us today is the same as it was to those to whom Jesus spoke personally. It may be that way in the world, but it must not be that way among you my followers.

It may not be possible for the church to be the church, and also be, as the sign said, “without controversy.” On the other hand, just because we have controversy, it is not necessary that we be a “free for all” either. Through his teaching about the great reversal, the call to child-like-ness, to servant-hood, to powerlessness and humility, most of all though his own humiliation and death on the cross, Jesus has shown us the way forward though our disagreements and controversies.

Rather than aspiring to power and influence and control within the world and within the community of the faithful, our calling is to seek to be servants of one another, actively loving one another other in the name of the one who first loved us.