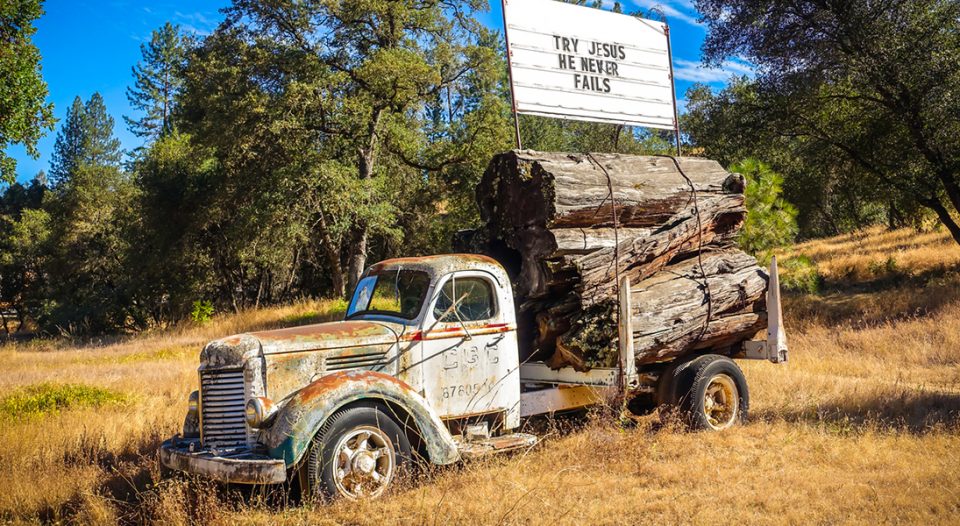 Have you seen those billboards on the interstates that purport to be messages from God? I ride the roads a lot and see many of those signs; they always make me laugh and sometimes they make me think. One in East Tennessee said: “Don’t Make Me Come Down There!” Signed, God.

It’s an unfortunate reality that, over and over again in the history of Christianity, this is the kind of fear-based message the religious folk have proclaimed to the world. The ancient Greeks told stories of angry and jealous gods who wreaked havoc on humanity without rhyme or reason. The Romans blended state and temple, allegiance to God and allegiance to emperor, into the exact same thing. Versions of Judaism emphasized strict obedience to the law and an angry God ready to purify the world with fire and lightening. The Christian era had an elaborate late medieval Roman system of mortal and venial sins, confession and absolution, pilgrimages and indulgences. The more modern fearmongers look at the book of Revelation and take texts out of context, making of them a pretext to scare the living daylights out of people who don’t believe the right way and act the right way. And who, in their right mind, would worship, love and adore a God who uses threats and violence to get his own way anyway? It boggles the mind.

And yet, over and over again in the history of God’s dealings with humanity and, more importantly, humanity’s attempts to deal with God, we have found ourselves overwhelmed by systems of belief and religious practice whose only purpose seems to be to keep an angry God at bay, to make sure that God stays up there where God belongs and doesn’t come down here and mess with us. The great thing we celebrate on Reformation Sunday is that Martin Luther figured out, “discovered” if you will, that this great elaborate system of winning God’s favor simply was not true. This is why Lutherans use the same Gospel lesson every Reformation Sunday: You will know the truth, and the truth will make you free (John 8-32).

I hope you noticed how carefully I said that Luther “discovered” that this notion of an angry and manipulative God wasn’t true. He discovered it in the same way that Christopher Columbus discovered America. Lots of people already knew America was here—the people who were already living here, for instance. And there were a lot of people over a lot of years who were aware of the true nature of God.

Look at our Hebrew Scripture lessons:

Jeremiah, written 2,000 years before Luther, says: I will forgive their iniquity and remember their sin no more (8-12).

Look at the Psalm, also 2,000 years before Luther: God is our refuge and strength, a very present help in trouble. Therefore we will not fear (46:1-2). Luther, a professor of the Bible at Wittenberg University, did most of his lecturing on the Psalms. He learned much of what he knew about the goodness and forgiveness of God from the Psalms.

Look at Paul in Romans: For we hold that a person is justified by faith apart from works prescribed by the law (3:28).

A thousand years before Luther, St. Augustine said: This righteousness of God, therefore, lies not in the commandment of the law, which excites fear, but in the aid afforded by the grace of Christ … (On Nature and Grace, A.D. 415).

I can go on and on. People like Peter Waldo in France, John Wycliffe in England, John Hus in Moravia and many others preceded Luther in rediscovering the golden thread of grace that weaves its way through every book and every story of the Bible. Luther was neither the first nor the last to be lifted up by God to speak in a particular time and place the truth about God’s love for the world and God’s call to us to love the world and one another with a similar passion. The issues change, but the gospel stays the same.

Those of us who gather around word and sacrament know an important truth: We don’t need to worry about God getting mad and coming down here. God has already come—and did not come to punish but to love.

It’s been 500 years since Luther “nailed” his points of debate on the Wittenberg church door.  The battle over indulgences is no longer our battle. What we face today is a world full of folks who have been so turned off by the preachers of the angry and judgmental God that they no longer care about church at all. We face a world that has decided they just don’t want to hear it anymore. They believe they have better things to do than listen to preachers talk about why this, and this, and that, and that are wrong, wrong, wrong. You know what? They’re right; they do have better things to do—and so do we.

Those of us who gather around word and sacrament know an important truth: We don’t need to worry about God getting mad and coming down here. God has already come—and did not come to punish but to love.

When Jesus came down here, there was hunger, social injustice and war raged upon the innocents—all in the name of such things as “truth,” “justice” and “national security.” Then, as now, values had become skewed, obscured and unrecognizable, and no one knew whom they could trust. And into such a world God sent the Son.

Our calling this Reformation Sunday is to find our voice, get off our pews and get out into the world, letting them know the truth about God and God’s love—the truth that will set them, and us, free.