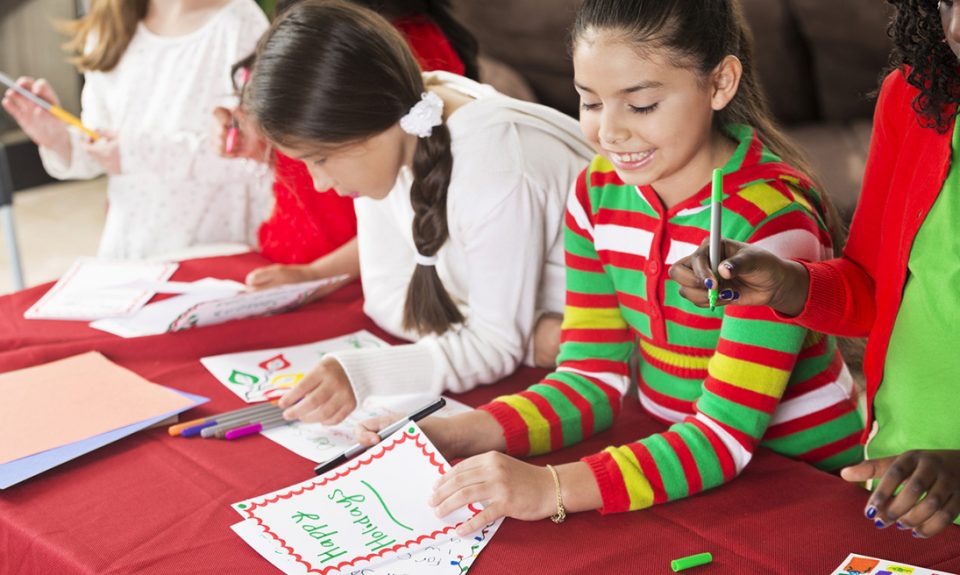 The holiday season is a time of joy and celebration for many Lutherans as they gather with friends and family to celebrate Advent and Christmas. But for more than 65 million migrants and refugees displaced from their homes, cheer can be hard to come by.

“For many newcomers, the holiday season is a time of new traditions and reflecting on the journey that brought them to the United States,” said LIRS program manager Whitney Palmer. “Many are reminded of the separation and loss that they have experienced. For some migrants, the sense of loneliness and loss is amplified by the months and, in some cases, years that they have spent in isolation in immigration detention.”

To reach out to these individuals, LIRS is inviting Lutherans across the country to participate in its annual Hope for the Holidays campaign. Now entering its fourth year, the campaign offers three ways to spread cheer to neighbors who are missing home:

LIRS began its Hope for the Holidays campaign in the fall of 2014, a year that saw an unprecedented “number of mothers and children fleeing violence and persecution in Central America,” according to an LIRS report on family detention. In response, the U.S. expanded its practice of detaining families and built additional facilities. Currently, there are three family detention centers—one in Pennsylvania and two in Texas.

“What started as a response to the increase in migrants seeking protection in the U.S. has quickly become an essential part of [our] mission to stand with and advocate for migrants and refugees,” Palmer said. “LIRS is committed to providing hope, strength and a voice to all who are seeking protection in the U.S. Through this simple act of writing cards and sending gifts, [participants] bring a message of hope, reminding those in immigration detention that they are not alone or forgotten.”

The response to Hope for the Holidays was greater than the staff expected. LIRS received 1,111 gifts and more than 11,000 cards for refugees and migrants during the campaign’s first year. Since then, 80 congregations have been involved in the campaign over the past three years. While some have participated since the beginning, new congregations have joined each year, often after a visit from an LIRS representative.

Christmas is a really important part of the Christian identity. We are called to love our neighbors, not just those next to us but around the world.

Epiphany Lutheran Church of Carbondale, Ill., for example, was among the churches that were inspired to take part after a visit from LIRS. The congregation set up tables last year during fellowship time so members could sit there and write holiday greetings on cards to families in detention.

“This sharing of joy around the holidays certainly is a part of who we are,” said Epiphany’s pastor, Paul Waterman. “Christmas is a really important part of the Christian identity. We are called to love our neighbors, not just those next to us but those around the world. It was a really cool way to extend that love to people we may never meet.”

With an average attendance of 87 each Sunday, Epiphany proved that a congregation doesn’t have to be large to make an impact. From the youngest Sunday school students to the oldest, longtime members, the congregation pitched in to write almost 400 cards.

“The kindergarteners couldn’t write letters, but they could draw pictures or write their names on a card,” Waterman said. “That’s how the younger ones get acquainted with the idea of ministry. I think that’s one of the great parts of the church—anyone from 3 to 103 is invited. Everyone can do something to contribute to ministry no matter how small or big, how young or old.”

By writing cards and sending gifts through the Hope for the Holidays campaign, LIRS provides Lutherans a tangible and meaningful way to send love and encouragement to those who are in need.

According to staff, the campaign has already made a difference. LIRS has received messages of thanks from detention centers on behalf of the families there.

The deadline to participate in any of LIRS’ Hope for the Holidays activities is Dec. 12. Staff ask that congregations publicize this year’s campaign with their members by Nov. 30.

More details are available on the Hope for the Holidays website, including sample greetings in English and Spanish for holiday cards, a link to sponsor a gift and good ways to host events with newcomers.

“In Matthew 25:35, Jesus tells his disciples, ‘I was hungry and you gave me food, I was thirsty and you gave me something to drink, I was a stranger and you welcomed me.’ LIRS welcomes migrants and refugees not just because it is part of [our] mission, but because it’s at the very core of the faith in which [that] mission was built,” Palmer said. “By writing cards and sending gifts through the Hope for the Holidays campaign, LIRS provides Lutherans a tangible and meaningful way to send love and encouragement to those who are in need.”