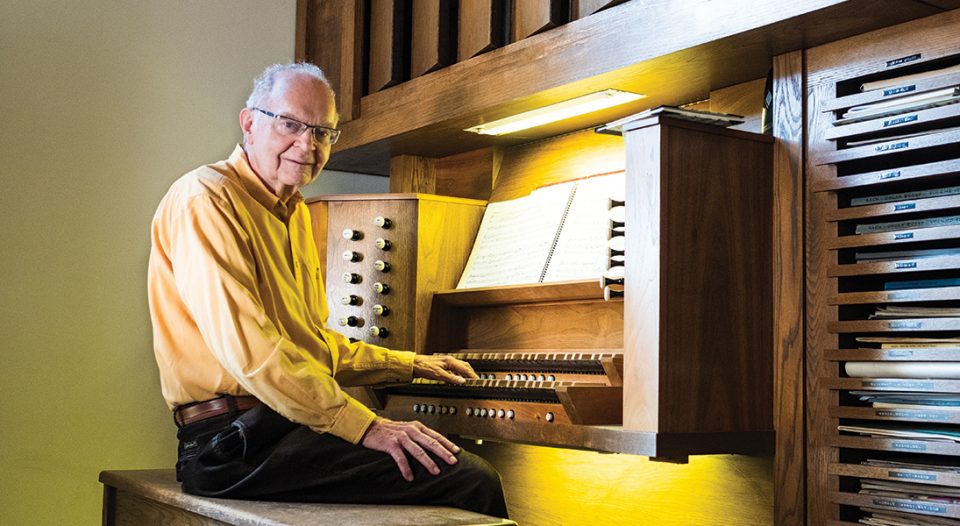 My faith has been a source of inspiration because I believe God is pleased when people create innovations that make our world ever better.

Writing “The Art of Computer Programming,” which people tell me is sometimes called the Bible of computer programming, has been my main life’s work, still unfinished. This series of books tries to capture and explain the principal ideas of computer science, the techniques that underlie almost every computer application today and are likely to remain important for many years to come.

One of the first computer programs I wrote was to produce super-complete statistics for my college basketball team.

Receiving the Turing Award in 1974 led me to continue to nurture computer science as well as I can (the award is considered the highest distinction in the field). I was especially pleased to receive the National Medal of Science from President Jimmy Carter in 1979 because it showed that my comparatively new field was coming of age and taking its place among established sciences such as physics, chemistry, biology and mathematics.

My book “3:16 Bible Texts Illuminated” has almost nothing to do with computer science. However, it did arise from my scientific work, which taught me that the best way to understand a complex subject is to choose a few unbiased, more-or-less random parts of the whole and to explore them in depth.

Thus, I decided one day to learn more about the Bible by finding out everything I could about 3:16, starting at Genesis and going through Revelation. To my astonishment, each of those verses proved to be extremely interesting and thought-provoking. The Bible was much richer than I’d expected; my Sunday school knowledge had given me a misleading impression. I learned there’s plenty of good stuff there for adults to chew on—more than a lifetime’s worth.

I couldn’t resist sharing what I’d learned by writing a book. Meanwhile, my work on developing software for book publishing had introduced me to some of the world’s greatest graphic artists. By God’s grace, about 60 leading calligraphers agreed to illustrate my book, and I was naturally pleased when The Lutheran chose to feature one of those illustrations on its December 1991 cover.

I began playing piano because my father was a Lutheran schoolteacher, part-time piano teacher and church organist. My own piano teacher taught me how to play a pipe organ when I was 12. Later, when I was a junior faculty member at Caltech (California Institute of Technology in Pasadena), the organist of our church suddenly became ill. I was asked to fill his shoes for several months. I fell in love with the organ at that time, partly because Pasadena was home to many wonderful organ soloists.

People are surprised that I stopped using email in 1990. After 15 years of email, starting in 1975, I decided that enough was enough. I wanted to be able to get work done again.

It’s important for me to be active in my congregation because we build each other up as we worship.

I believe there is great opportunity to help today’s college students and faculty understand the true meaning of the word “evangelical” by broadening our outreach to them. Common media stereotypes make my colleagues think Christians are narrow-minded individuals who are quite different from the people I love in the churches I love. Of course, university folk are only a small minority of the general population. But as I keep reading only about mission activity that is directed elsewhere, I can’t help hoping that one or more people with theological expertise will be inspired to become “apostles” to modern universities.

I tried to do a little along those lines 20 years ago when I gave a series of lectures at the Massachusetts Institute of Technology about relations between faith and science—reprinted in my book Things a Computer Scientist Rarely Talks About.

I began to plan a musical composition for the organ, based on the book of Revelation, during my years at Caltech. Walter Schroeder, a Caltech professor, had been leading a Bible class at our church about Revelation, and I noticed that the structure of Revelation had a lot in common with music. I began to think that someone (me?) should write music that follows the themes of Revelation almost exactly, weaving them together in notes instead of words.

That idea haunted me and inspired me for almost 50 years, during which time I continued to learn more and more about music and the Bible. In 2012, I realized that if such a “pipe dream” was ever going to be realized, I’d better get to work. The result, after many weekends of part-time activity and many false starts, was Fantasia Apocalyptica. This multimedia composition has brought me great joy because I have a strange feeling that it was almost dictated by a “muse.” God must have been blessing this project because Canadian organist Jan Overduin bonded with it immediately and agreed to play the premiere concerts.

The world premiere of Fantasia Apocalyptica took place early in January 2018 when more than 150 people traveled to northern Sweden for the occasion—my 80th birthday!

I’m a Lutheran because my parents and grand­parents, and indeed all my known ancestors back to the 1600s, were Lutheran. Furthermore, like theologian Joseph Sittler, I’m especially pleased to have been raised in the Lutheran tradition because it taught me that I didn’t need a “cerebral bypass operation” in order to approach God. Lutherans use their God-given intelligence to dig deeply into spiritual questions. Martin Luther was a great scholar—a man who used his head and his heart simultaneously.

Sentence prompts are provided to each person featured. If you’d like to nominate someone for “I’m a Lutheran,” email megan.brandsrud@elca.org.