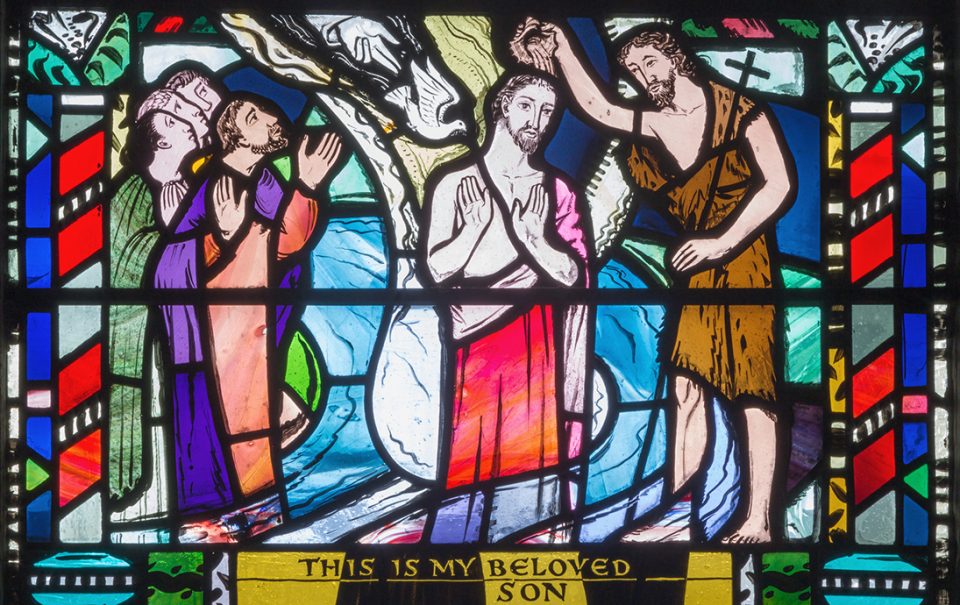 London - The Baptism of Jesus scene on the stained glass in church St Etheldreda by Charles Blakeman (1953 - 1953).

Upon returning to church after a long absence, the writer Nora Gallagher spent the whole first year crying. She would receive communion, return to her pew, kneel and cry.

“The trouble was,” she wrote, “I didn’t believe it was about anything real. I went to church as if it were a ballet. I went to the ballet on Sunday, felt many different kinds of feelings, couldn’t bring those feelings into line with my intellect or figure out how to integrate them into my own experience, and so gradually they faded as the week wore on. It takes a long time to understand what is being asked, and who is doing the asking.”

Sometimes I wonder why God isn’t more obvious. Wouldn’t more people believe and take God seriously if the Almighty spoke out loud like at Jesus’ baptism? If God would just tell us, clearly, what we’re supposed to be doing in this life? “Yes, I’d be glad to do that, your Honor.”

Why the misty veil? Why not more clarity from God in this regard? Perhaps we’d save a lot of wasted time and tuition, and people would bound out of bed each morning with clear and vibrant purpose.

In the movie Love and Death (1975), an amusing and reluctant pacifist Russian soldier named Boris Grushenko is constantly pondering his place and purpose in life. On the night before a duel, he wonders if God will be with him. “If only God would give me some sign,” Boris says. “If he would just speak  to me once. Anything. One sentence. Two words. If he would just cough.”

Perhaps it would indeed be easier for us if God were more obvious and straightforward. But on second thought, I’m not so sure about that. If everybody noticed the voice you were hearing, I suspect that would be one thing. But if you alone heard a heavenly declaration, you’d be in something of a pickle, right?

Isn’t this partly what got Jesus into trouble? There is no evidence that anyone else heard the divine voice at his baptism or saw the heavens torn apart or the dove descend. He alone experienced these rather paranormal biblical details, acted on them and promptly got people riled. “By what authority are you doing these things” (Luke 20:2)?

Christians 20 centuries removed know the source of this authority. But Jesus’ peers mocked the man for making outrageous claims about his mission and following a voice he alone heard.

Most people who do have extraordinary religious experiences keep quiet about them, I suspect. They fear that others will find them bonkers. I can’t recall the number of times people have told me stories that begin with, “You’re not going to believe this, but ….”

We may truly desire the clarity that Boris longs for. But I’m not so sure about actually receiving it. You might want to be spared the very voice of God (see Psalm 29). Perhaps that’s precisely what God is doing with careful divine reticence—sparing us.

God, in this age, seems to prefer a rather subtle conveyance of call. I admit to occasional frustration in this regard, desiring something more immediate and obvious. God chooses not to overwhelm us. Consider this a blessing.

Instead of a robot with zero choice to say “no” in the matter, God desires a servant who has fallen in love over time. “God cannot ravish,” C.S. Lewis wrote. “He can only woo.” Sometimes it takes quite a while for us to discern what it is we’re called to do, even requiring a long series of starts and stops. “It takes a long time,” Gallagher said, “to understand what is being asked, and who is doing the asking.”

As we celebrate Jesus’ baptism this month, we remember our own—open in prayer, craning expectant ears to listen for God’s voice. A voice that’s blessedly veiled. A voice with something remarkable in mind for each of us.