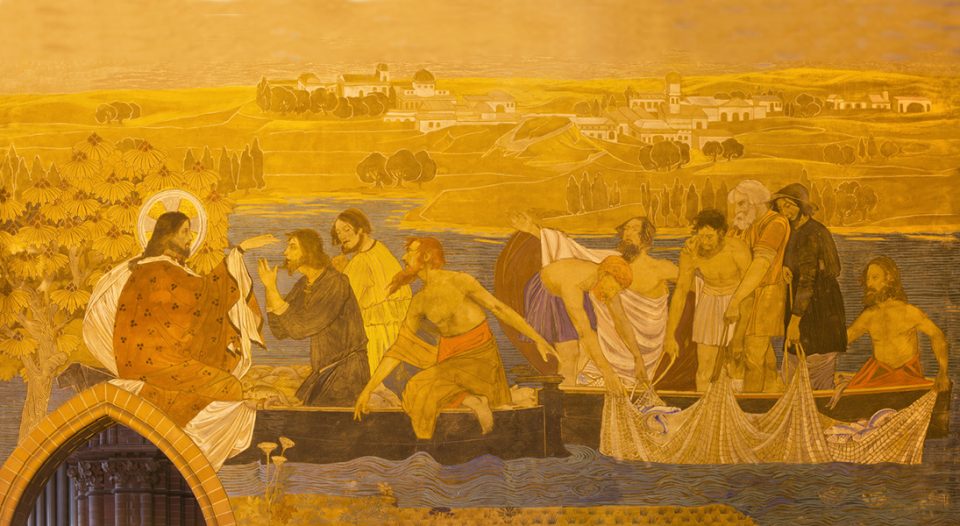 Berlin - The fresco of Miracle Fishing in St. Pauls evengelical church by workroom Gathemann & Kellner from begin of 20. cent. in 'Jugendstil'.

The Gospel story of the fishermen enjoying one last great haul and then following Jesus is one of my favorites. I’ve spent lots of time admiring the Sea of Galilee and observing close-shore netting practices around the world. Only when you understand the practice of trammel netting can you really see the transformation that Jesus offered his first few disciples.

Trammel netting was the fishing technique used on the Sea of Galilee in Jesus’ day, when fishermen worked at night (Luke 5:4) and cleaned their nets early in the morning (Luke 5:2), according to a 1993 article in Archeology Review. Fishermen started at dusk, tying together lengths of double- or triple-layered nets and then rowing out to deep water a moderate distance from shore. They dropped their nets to form a crescent-shaped wall just where the water deepened. The nets were held in place by rocks tied to the bottom and a cork tied to the top.

The fishermen then paddled quietly back to the shore. After a while, they started making a huge racket by shouting, slapping oars on the water and stomping on the bottom of their boats. This scared the fish, whose instinct was to dive down and out of the shallow water toward the deep water, directly into the waiting nets. Because the nets were laid at night, the fish didn’t see them and became hopelessly entangled in the middle layer. The fishermen then hauled the nets onto their boats or dragged them onto shore.

After removing the catch, fishermen repeated this process of loading up the net, setting it in place, rowing back to shore, shouting and then hauling the net—as many as 10 times a night. By morning, they would have been exhausted from their work. Still, they had to clean the nets of any mud or fish parts that might alert the next night’s catch of the net’s presence. The nets were hung up to dry all day while the fishermen rested for their next night of work.

The job of Jesus’ disciples would be similar to their job as fishermen—they needed only use their words and excited exhortations to help drive people toward the kingdom.

When Jesus showed up in the morning and told Simon Peter to try fishing again (Luke 5:4), his words would have made no sense to any fisherman who knew the process. During the day, the fish could easily observe both the boat and thick nets, and avoid both. But the disciples, obeying the one whom Simon Peter called “Master” (Luke 5:5), tried again. Their miraculous catch was a miracle not just because they caught a lot of fish but because Jesus caused a multitude of fish to swim directly into the nets, which they normally would have avoided.

Simon Peter knew that Jesus worked miracles. His own mother-in-law had been miraculously healed (Luke 4:39). He heard Jesus preach from Peter’s own boat (Luke 5:3). But only when Jesus gave a miraculous sign that contradicted everything Peter knew about his livelihood did he fall at Jesus’ knees, understanding the implications of Jesus’ power.

Jesus responded that Simon Peter should not fear, and that he, James and John would be fishing for humans. In this metaphor, the kingdom of heaven is the huge net into which all sort of fish come (Matthew 13:47-48). The job of Jesus’ disciples would be similar to their job as fishermen—they needed only use their words and excited exhortations to help drive people toward the kingdom.

The fishermen no longer shouted nonsense at fish but proclaimed the good news of the coming kingdom of heaven. Through their time learning from Jesus, and then afterward with their indwelling of the Spirt, the disciples’ speech changed. Peter went from yelling at fish to inviting people into the kingdom at the first Christian Pentecost (Acts 2). I understand this process as the fulfillment of Isaiah 6:6-8 (and Jeremiah 1:9, from last week’s reading), in which the prophets’ lips were symbolically touched in order to prepare them to utter words on God’s behalf.

I feel encouraged and excited when I think about how Jesus took worn-out fishermen and showed how their skills could be used by the master of the world to help fill up the kingdom of heaven.