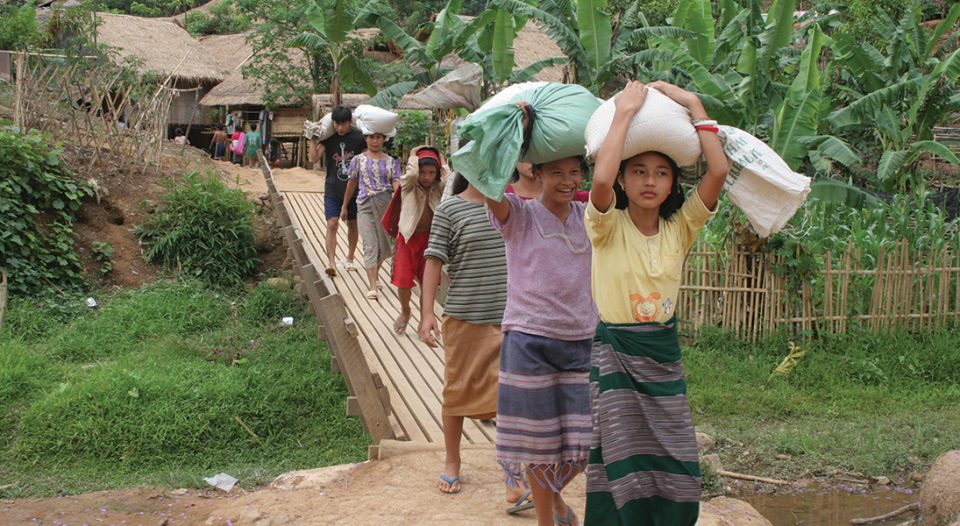 It was the church—a Christian community of Karen people who met in their Thai refugee camp—that provided them peace the last 18 Christmases.

And it is the church—this time Christ, an ELCA congregation in St. Paul—that’s accompanying the family as they adjust to life in the U.S.

In 2018, Christ Lutheran entered into relationship with Hart Lwel’s family through the Circle of Welcome program. From donations to social outings, the congregation has worked to ease the family’s transition to a new culture. The congregation also has expanded their knowledge through a friendship that transcends language barriers.

Organized by Lutheran Immigration and Refugee Service, Circle of Welcome equips congregations to support refugee families resettled through the organization’s network. Congregations can accompany a family before and during their resettlement; join with a family after they arrive in the U.S.; or engage in advocacy work. Because Circle of Welcome offers three models for involvement, congregations of all sizes and contexts can fulfill Jesus’ mandate of welcoming the stranger.

Ron Johnson, a former pastor and member of Christ Lutheran, said the congregation learned of the need for Circle of Welcome volunteers from Margaret Yapp, the project’s coordinator for Lutheran Social Service of Minnesota, with which they had previously worked. While assisting with a family of nine from Ethiopia in 2016-17, Johnson said “a strong friendship developed,” and the congregation was eager to journey with another family.

“We were open to participation on the basis of any of the three models but preferred ‘newly arrived,’ ” he said. “Our contact with the family began about two months following their arrival.”

As part of its commitment to the program, Christ Lutheran hosted a barbecue to raise funds to welcome Hart Lwel’s family to the U.S. Through many acts of generosity, the congregation raised more than $8,000 for the family’s resettlement expenses. They also donated a TV and computer to assist them with cultural education, Johnson said.

Once the family arrived in the St. Paul area, congregants met regularly with them in their new home. Nearly everything was new to the family, including the English language and the frigid Minnesota winter. “The cold weather is very cold for me,” Hart Lwel said. He expressed gratitude to everyone who came alongside him as he learned, including Yapp, Christ Lutheran, members of the local Karen community and interpreters.

Christ Lutheran was learning too. “The story of [their] movement, and the reasons for it, prompted some of us to learn more about a portion of the world that generally seemed very remote,” Johnson said. “This provided a lens through which to view the many stories concerning refugees in the world.”

As time went on, the family joined Christ members on trips to the zoo, playgrounds and downtown St. Paul. Likewise, the family introduced them to their faith community. “Whenever I have time and all the American friends have time, I introduce them to the Karen church,” Hart Lwel said.

Yet there were challenges as they learned about one another. “The greatest challenge, by far, has been the difficulty of communication,” Johnson said, noting that the family had little background with English but is learning.

Nevertheless, they bonded. “Friendship can transcend even the boundaries of language,” Johnson added.

Though the family and congregation have different cultural traditions, they share cultural values, including the importance of education.

“The main thing, the important thing for me and my family is education,” Hart Lwel said. “When our kids went to school for the first day, that [was] the happiest time for us.”

For the future, Johnson said he and other members are already planning more activities, including reading more with the family. The family also may move to a new home this spring.

Changes will come, but, as Hart Lwel said, “everything that we will find, we will go through together.”