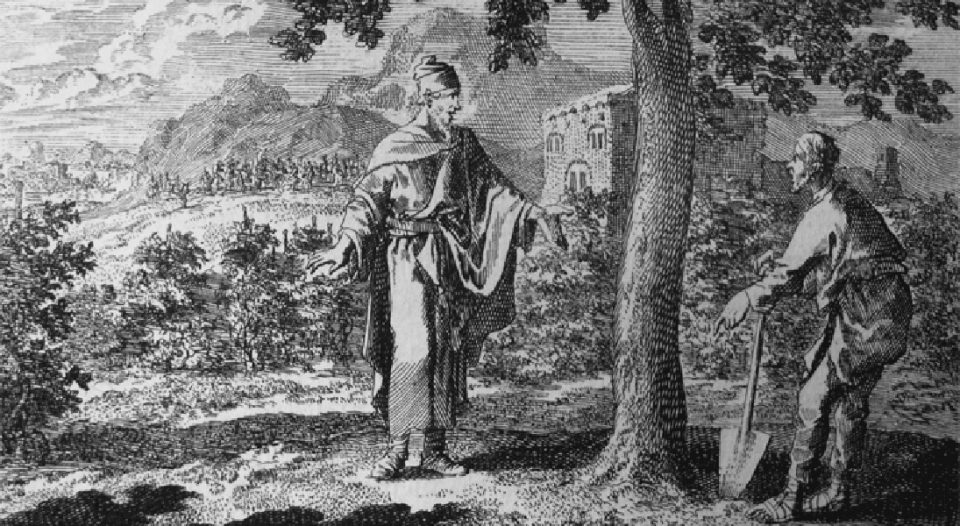 An etching by Jan Luyken illustrating Luke 13:6-9 in the Bowyer Bible, Bolton, England.

One of the first observations my wife and I made about each other is that we have different decision-making paradigms. She likes to gather evidence and then slowly, methodically examine the situation before coming up with a wise decision. My process is more like the Hebrew word חפז (khafaz), which means something like “panic-haste.” I just want to decide as quickly as possible, frequently without considering all the potential outcomes, and move on. There might be useful aspects to both of our processes, yet this week’s lectionary readings point to the need to move quickly in making the ultimate wise decision.

In the chapters immediately preceding this week’s Gospel reading, Jesus teaches the guests at a Pharisee’s dinner party, and when he leaves the house, apparently several thousand people are waiting to hear from him (Luke 11:53-12:1). Someone from the crowd asks him about theodicy, or why God allows bad things to happen to seemingly good people. The standard religious answer says bad things happen to bad people who deserve them, which absolves God of any blame. There is ample Scripture to support this position: Ezekiel 18:20; Deuteronomy 24:16; Numbers 27:3.

Then Jesus hears about the Galileans whom Pilate had killed in the temple. People naturally wonder what specific bad act they had committed to deserve being murdered while presumably under God’s protection inside God’s holy temple. Jesus’ response takes the focus off the imagined sinfulness of those specific martyrs and turns the bright spotlight onto his hearers. Those Galileans were not worse sinners than anyone else. But everyone deserves death, and they just happened to be the ones killed. Jesus asks his listeners if the 18 people crushed in the collapse of the Siloam tower (probably the main corner-fortress at the intersection of Jerusalem’s southern and eastern wall) were worse sinners than anyone else. Everyone deserves death, Jesus seems to be saying; the Siloam victims just happened to be the ones killed. The New Testament states just as clearly as the Hebrew Bible that sin is fatal (Romans 6:23; James 1:15; Romans 5:12).

Jesus’ solution, as it so often is, is for us to stop contemplating the unknown sins of others and instead urgently contemplate our own lives.

Jesus’ solution, as it so often is, is for us to stop contemplating the unknown sins of others and instead urgently contemplate our own lives. Jesus implores his hearers to repent so they will not likewise perish. Sometimes people are killed because of the murderous Pilates of the world. As recounted by the historian Josephus in The Jewish War, when Pilate stole from the treasury of the Jewish temple to build an aqueduct, Jerusalem rioted and Pilate ordered the murder of hundreds of civilians to restore order. Foreign occupiers can be brutal, and people get killed. Sometimes even the best, firmest buildings topple, especially in earthquake zones. (I felt my first large earthquake while living in Jerusalem for the first time.) Jesus teaches us to focus on repenting rather than being accountants of others’ sins. If that repentance leads to making peace and improving infrastructure so fewer people are killed by war or building collapses, so much the better.

The key moment in the parable of the fig tree in Luke 13 is the gardener telling his boss to “give the unproductive tree another year. I will do my best to help it grow, but if it does not produce good fruit, then we will cut it down.” Jesus is talking about us. We have a short time to respond to his grace and turn from our sinfulness to produce fruit in keeping with repentance (Matthew 3:8; Luke 3:8). Many of Jesus’ original hearers would still have been alive in 70 A.D. when the Romans mercilessly sacked Jerusalem, destroying the temple and murdering thousands of civilians. But even if we die in our beds of old age, the end of earthly life still comes. Jesus says we should repent while we can. The other lectionary readings this week further this sense of urgency. Isaiah 55:6 urges the reader to “seek the Lord while he may be found, call upon him while he is near!” The psalmist earnestly seeks God, thirsting for contact with the Divine as if panting for water in a desert (Psalm 63:1).

We need not fear and should definitely not panic, as I too often do in my decision-making. God is a good and gracious God who seeks us out and ultimately sent God’s son to rescue us from the powers of sin and death to which we were enslaved. At the same time, we should make the ultimate wise choice, repenting our sins and following Jesus as soon (and as often) as we can.