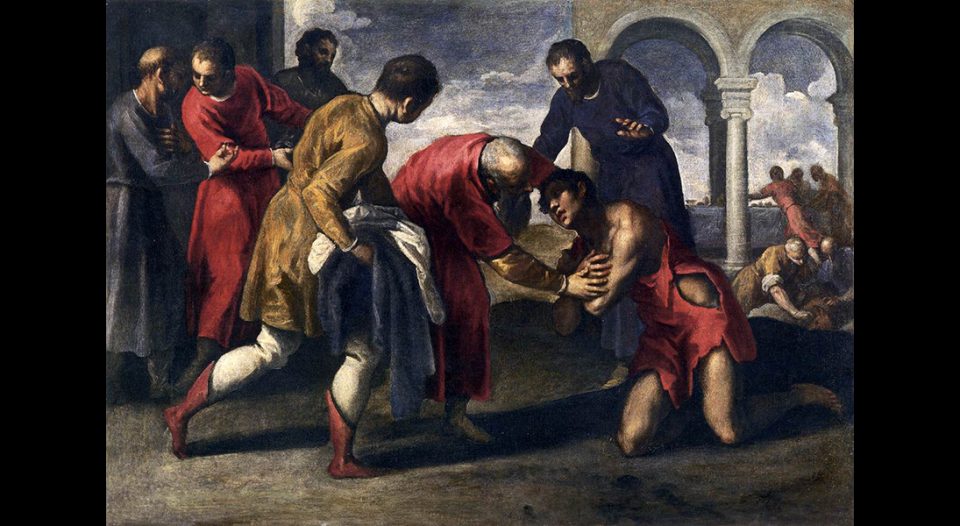 The lectionary passages this week focus on one thing: God’s delight in offering forgiveness and acceptance to those who repent. In the parable of the wayward son and the story of the Israelites finally leaving their wilderness journeys, God demonstrates gracious love to those who are willing to come to God.

The story of the wasteful son is well known. The son despises his father so much that he demands his inheritance while the father is still alive. He then leaves home and everything he has known to travel to a distant country (Luke 15:12-13). The son’s lascivious and lavish lifestyle soon bankrupts him. After coming to his senses, he returns to his father asking for work. Instead his father welcomes him, clothes him and throws a party to celebrate his return, as if his child has been resurrected from the dead (Luke 15:32). The man’s other son, whose faithful presence has gone unrewarded, is jealous of the celebration thrown for the wayward son and refuses to participate.

Jesus intended this parable for multiple hearers. For the tax collectors and sinners with whom he ate (Luke 15:1), Jesus wanted to show the lengths to which God would go to celebrate their repentance and return to the fold. An old Jewish interpretation of Malachi helps elaborate the point:

“[Repentance] may be compared to the son of a king who was far away from his father: a journey of a hundred days. His friends said to him: ‘Return to your father.’ He said: ‘I am not able.’ His father sent him a message saying: ‘Come as far as you are able in your own strength and I will come to you the rest of the way.’ Thus, says the Holy One, blessed be he: ‘Return to me and I will return to you’ ” (Malachi 3:7; Pesikta Rabbati 44).

Jesus may have been referencing a story about Herod Agrippa, who left his home territory of Idumaea to live in Rome. While there, he threw lavish parties to curry favor with influential Romans, but it all came to naught and, bankrupted, he had to move back to Idumaea in disgrace. Jesus was saying that if this corrupt collaborationist would return and repent, even he would be welcomed. Instead, Herod Agrippa died quickly because of accepting idolatrous praise (Acts 12:20-23; Josephus, Antiquities 19.8.2).

The other audience for the parable of the wayward son was the Pharisees and teachers of the law. They, like many of us, resented all the attention paid to the sinful and deviant in order to woo them into repentance. Shouldn’t those who spend their whole lives trying to live righteously be rewarded? Jesus’ answer is: yes! Everything the father has belongs to the son who stayed with him faithfully (Luke 15:31). But when a sinner, who was counted as dead and lost, turns around and comes home, that is reason for all of heaven and earth to celebrate.

Scripture is incredibly consistent in pointing out how God, like the father of the wayward son, longs to run after God’s wayward children and welcomes their repentance with a relieved and grateful embrace.

Scripture is incredibly consistent in pointing out how God, like the father of the wayward son, longs to run after God’s wayward children and welcomes their repentance with a relieved and grateful embrace. After the wilderness generation of Israelites died because of their faithlessness, God ordered Joshua to circumcise the next generation of Israelites who, according to Joshua’s narrative, would faithfully follow the commands of the Lord in their conquest of the land. God called the place where they were circumcised “Gilgal” (which sounds like the Hebrew word for “roll”) because there God rolled away their reproach (Joshua 5:9). The psalm for this week points out that if we are willing to confess our sins (Psalm 32:5), then God will remove our transgressions and cover over our sins (Psalm 32:1). God is reconciling the world to God and not counting sins against us (2 Corinthians 5:19).

There is much good news in this week’s lectionary readings. God longs to welcome repentant sinners back into the divine embrace, and those who have lived righteous lives will inherit all that is God’s (Luke 15:31). Repeatedly in Scripture, God goes to great lengths to seek out and welcome the wayward. Our only responsibility is to reject our own folly and return to God—or, if we have never left, to party when brothers and sisters return to the fold.