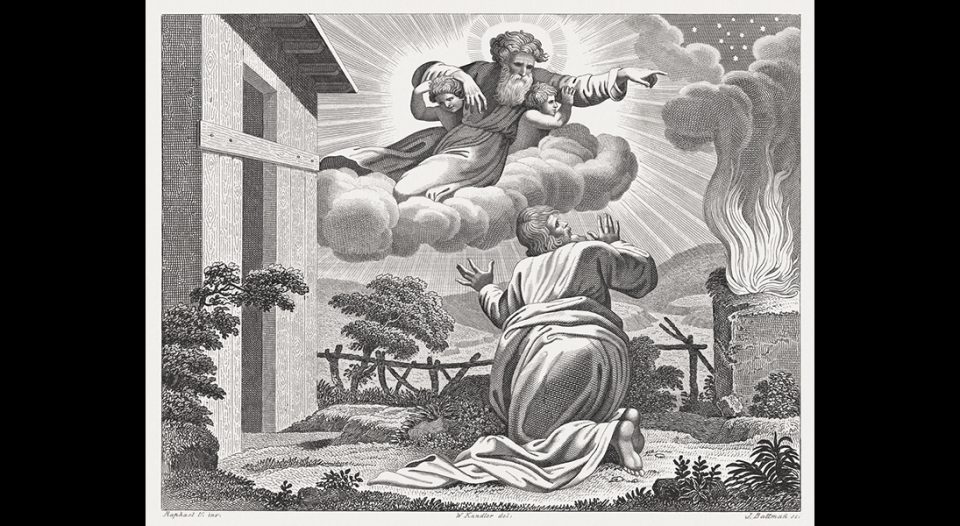 The Lord took him outside and said, “Gaze into the sky and count the stars – if you are able to count them!” Then he said to him, “So will your descendants be.” (Genesis 15, 5). Steel engraving after the frescoes by Raphael (Italian painter, 1483 - 1520) in the Loggia at the Vatican (Apostolic Palace), published in 1841.

I never read many of the classic children’s books that excited my friends. I couldn’t get past the first book of C.S. Lewis’ Chronicles of Narnia series. But something that Lewis wrote about the willingness of Aslan the Lion to die for others has stuck with me. According to the “Deeper Magic” before the start of time (i.e. God), when an innocent person willingly dies in the place of a murderer, the Stone Table (i.e. Jesus’ tomb) will crack and death will be reversed. This week’s passages from the lectionary point to the “deepest magic” of our Christian faith—that moment in time when God cut a covenant with Abram.

In the days before Jesus was killed, he knew what would befall him. He was journeying to Jerusalem to be betrayed by a follower; judged by a hasty gathering of a partial Sanhedrin; and then mocked, tortured and killed by the Roman occupiers of Judea. In the passage from Luke, the Pharisees warn Jesus about Herod (Luke 13:31), yet Jesus knows his true killers will be the Romans, acting at the behest of some of the religious elite. Jesus states explicitly that, although he longs to comfort Jerusalem, his trip to that city will prove fatal, as it has for other prophets and messengers. Even though Jesus knows that he will die, he also hints that, on the third day, he will arrive at his goal (Luke 13:32).

I argue that Jesus’ crucifixion, death and resurrection are pointed to in the Hebrew Bible reading for this week from Genesis. It is my practice to refrain from clunkily inserting Jesus into passages from the Hebrew Bible, which have meanings all their own apart from Christology. Yet Jesus himself applied passages from the Bible, as they knew it, to the messiah to show how Jesus was the fullest working out of God’s salvation. In that spirit, let us review the cutting of a covenant between Abram and God.

In the Hebrew Bible, and more generally in the ancient Near East, covenants were “cut,” literally. The verb כרת (to cut) appears about 90 times in the Hebrew Bible to signify covenant-making. The Hebrew word for “covenant,” ברית, comes from the root word ברה, meaning “to cut.” There are many examples of different ways to cut covenants, but one important part of finalizing and formalizing such a bargain was literally cutting up an animal. Extrabiblical documents from the second millennium BCE describe how, in making peace, animals were killed, cut up and then eaten to demonstrate what would happen to those who violated the terms of the covenant (“Abban and Alalaḫ,” by Donald Wiseman, Journal of Cuneiform Studies).

God’s willingness to enter into a covenant with us, and then pay the price when we fail to honor it, is the deepest magic of all.

The practice of solemnizing a covenant through the ritual killing of animals seems to have been so well known that when God told Abram to take the five species, he knew exactly what to do with them without further instruction. He was not to offer them as burnt sacrifice, but to demonstrate the results of breaking a covenant (Genesis 15:9-10). When making a covenant, the respective parties usually stood on opposite sides of a tiny valley and cut animals in half so the blood flowed down, making what is called a bloodpath. The participants in the covenant then took turns walking through the bloodpath, splashing the blood on their feet and legs. The spoken (but more often unspoken) message of the bloody ritual was: “If I fail to hold up my end of the deal, do to me what we’ve done to these animals.” God references this sort of acting out of radical commitment to this practice in Jeremiah 34:18: “Those who transgressed my covenant and did not keep the terms of the covenant that they made before me, I will make like the calf when they cut it in two and passed between its parts.”

But Abram did not walk between the animals. To be sure, God cuts a covenant with Abram, promising the holy land to his descendants (Genesis 15:7-9, 18-21) if he and his descendants will honor God and God alone (fully explained in Genesis 17:7-8). Any cut covenant requires two participants to act out what would happen to each of them if they failed to live up to their part of the deal. But Abram did not walk through the bloodpath. Instead, first a smoking firepot and then a flaming torch passed between the pieces (Genesis 15:17).

There are countless interpretations of this passage, but notice how often in the Bible God’s presence is represented by smoke (as in the pillar of smoke leading the Israelites through the wilderness or the smoke that indwells the temple in Isaiah 6:4, 2 Chronicles 5:14, and Revelation 15:8). Usually the greater party of a covenant passed through the bloodpath first, so an image of God’s presence passing through makes sense. But then a flaming torch, rather than an old man, passes through second. I can only think that this flaming torch represents Christ, the image of the unseen God. I think it was at this moment that Christ proves to Abram his willingness to suffer and die so that we will be freed from sin and death for failing to love, honor and serve God alone. To be clear, I think that God exempted Abram from walking in blood in order to demonstrate God’s graciousness. This is profoundly beautiful but also profoundly sad, because Jesus would eventually die and know separation from the Father. In so doing, however, Jesus rescued us, made us citizens in heaven and promised to transform our bodies just as God transformed his glorious resurrected body (Philippians 3:20-21).

In the ancient history of God’s beloved community, we read a story of confusing symbols and bloody rituals. But its message is quite simple: God’s willingness to enter into a covenant with us, and then pay the price when we fail to honor it, is the deepest magic of all. Let us thank Jesus for purchasing us at such a steep personal price, and live as citizens of heaven!